Back on the Oregon Coast Via Silver Falls State Park

The lure of the Pacific coast won out, but since we didn’t want to drive 200 miles in one day from Bend to get there, we made a slight detour at Silver Falls State Park, 25 miles east of Salem. Several people recommended that we stop there, but when I checked the campground reservations it was always fully booked. I decided to take another look last weekend and found a site open for Tuesday and Wednesday nights. $26/night for water and electric, along with the $8 reservation fee, which brought it to $30/night. 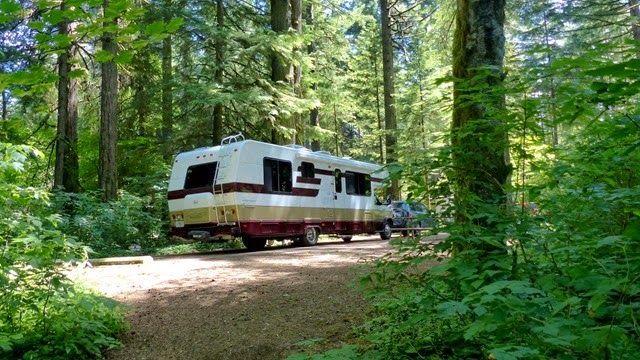 We had no idea that we would be pulling into the best site in the entire campground, A 72. It was surrounded by forest and backed onto Silver Creek. 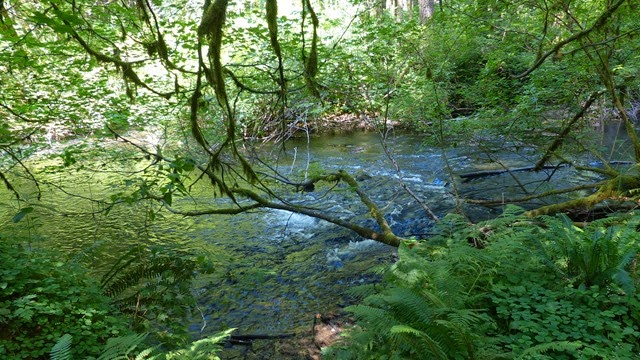 The weather was perfect for sitting out and the cats loved their walks on the trails by the creek. Some days you just get lucky. The only downside, we had no phone or internet connection. But without the time-sucking internet I actually finished a book I started weeks ago and began reading another one. 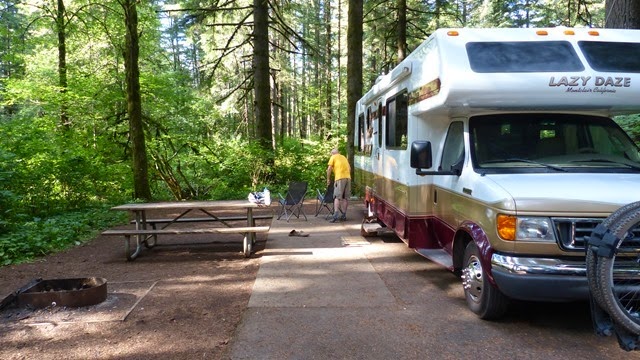 After getting set up we hopped on the bikes to check out the rest of the campground and the four miles of very hilly paved bike trails through the park. Then yesterday it was the 8+ mile Trail of Ten Falls , a National Recreation Trail which takes you to ten waterfalls, four of which you can actually walk behind. Since this is the temperate rain forest everything was green, lush, and dripping water. Simply lovely! 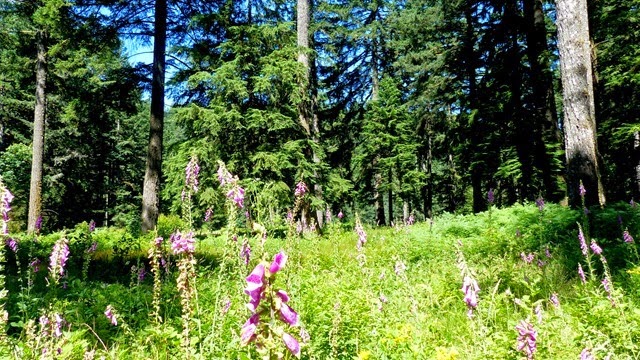 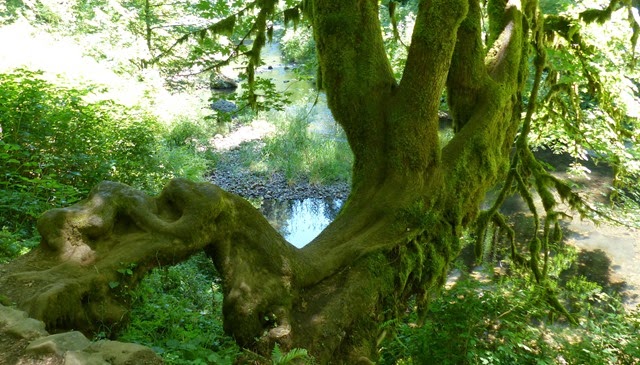 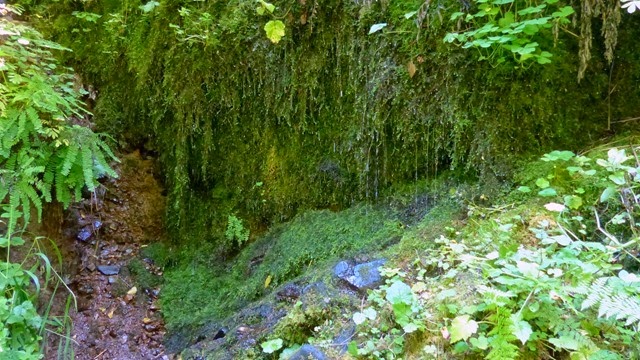 The map of our hike. We went clockwise starting at the South Falls Day Use area. 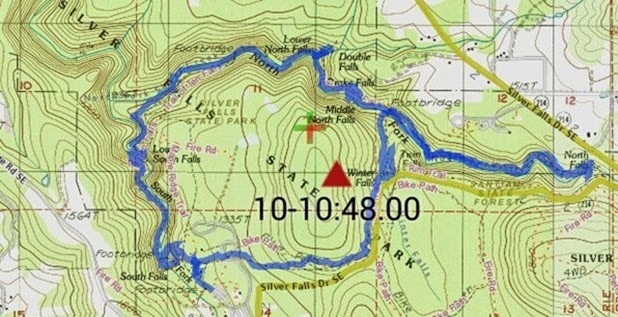 And now for the falls, beginning with impressive 177’ South Falls. 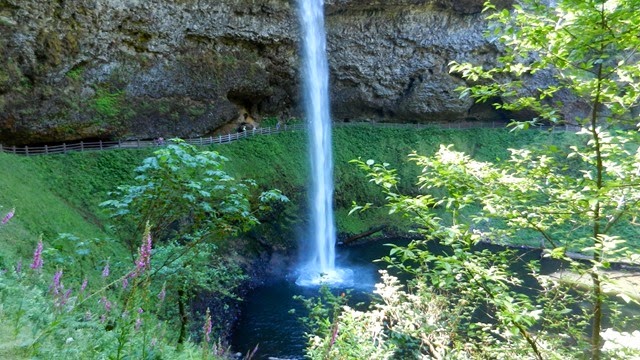 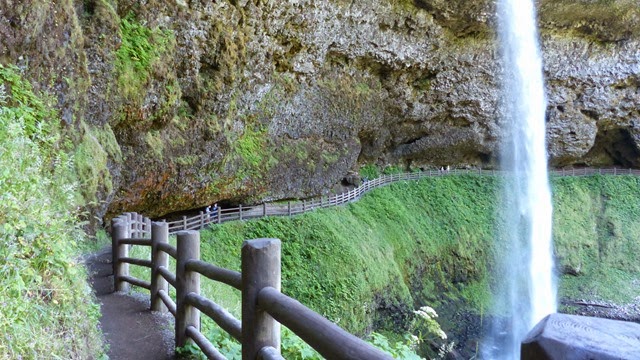 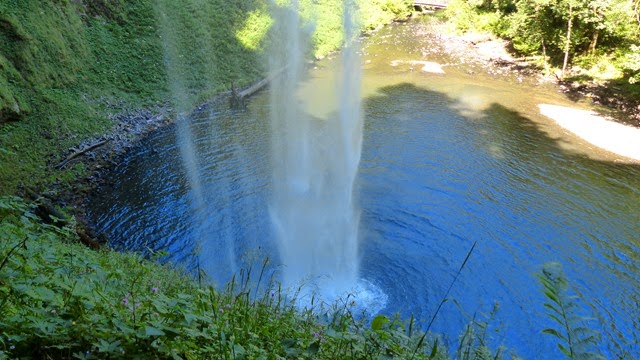 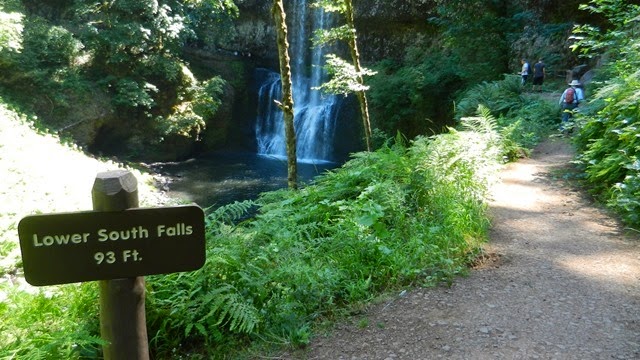 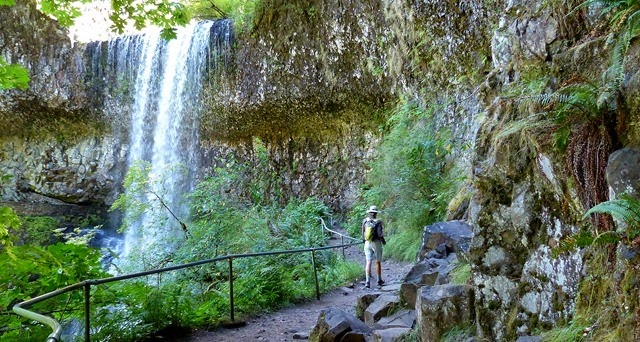 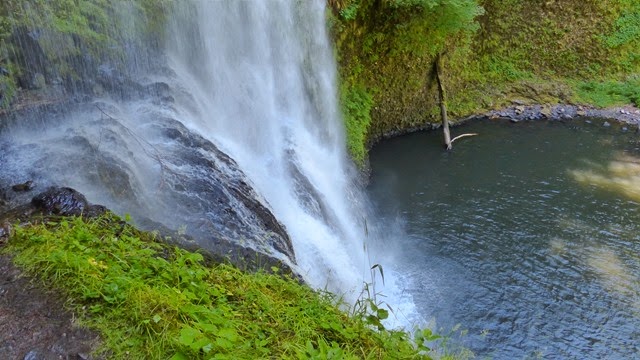 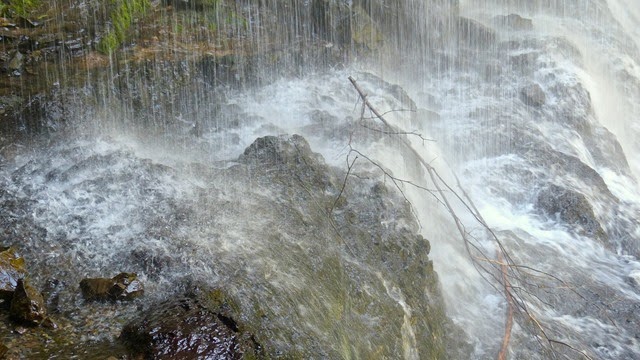 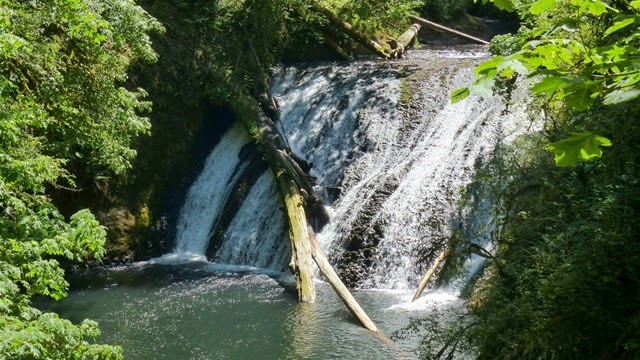 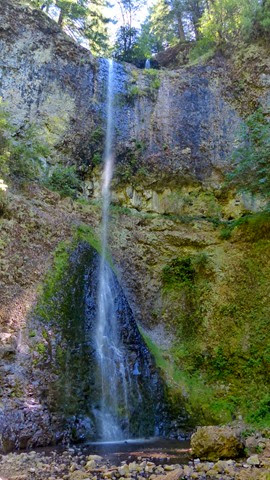 The perfect place for lunch. 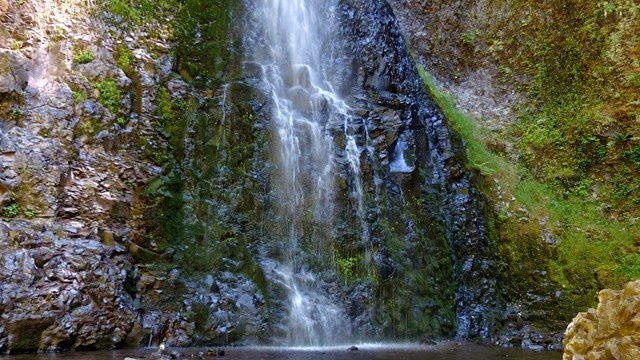 We didn’t get a picture of Drake Falls since the trees all but blocked it from view. Next up was 106’ Middle North Falls. 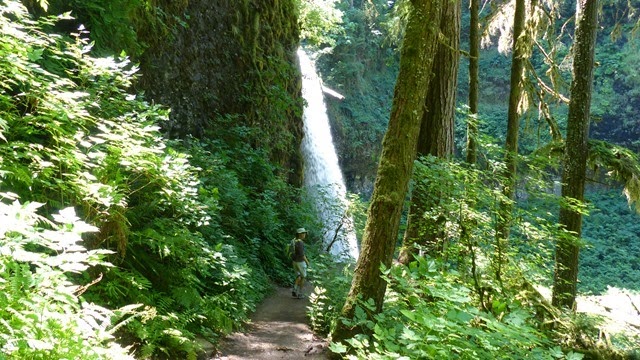 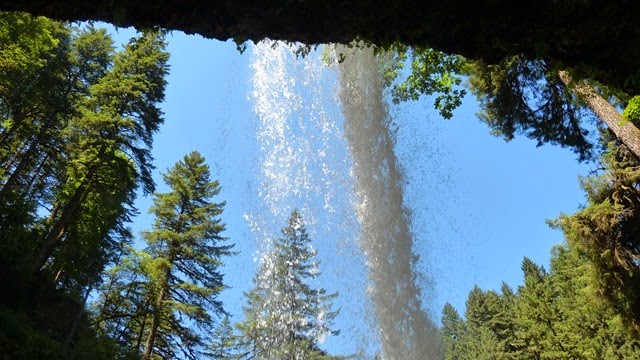 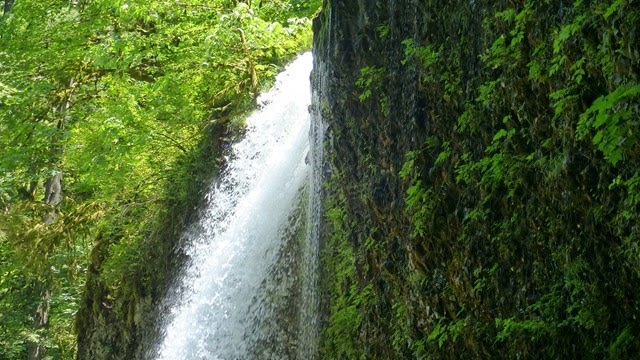 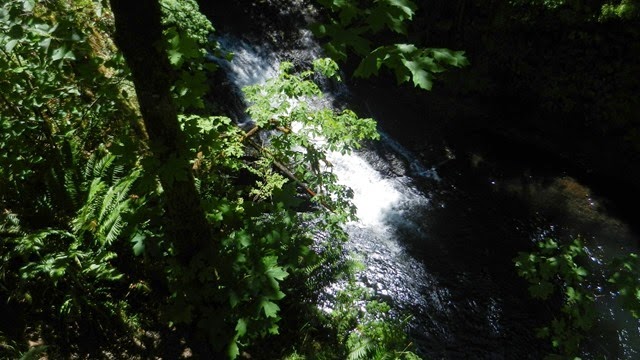 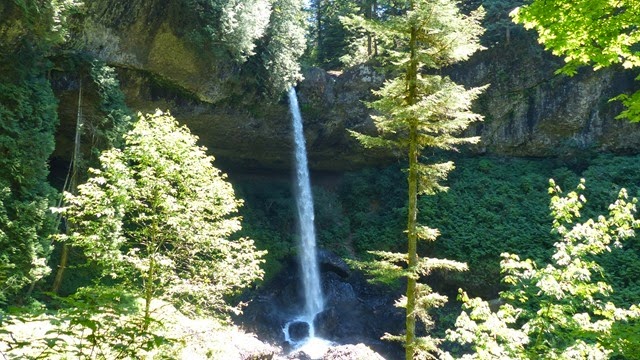 It was here that Jim realized his sunglasses were missing. Does this story sound familiar? 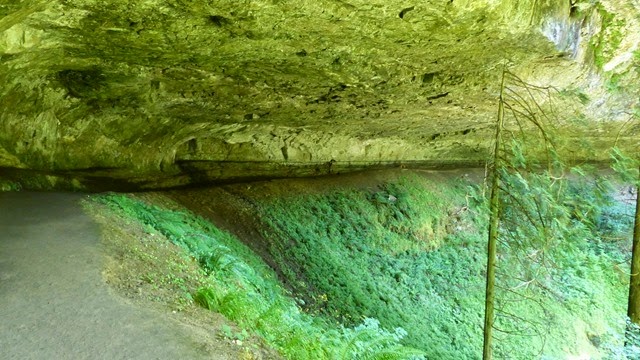 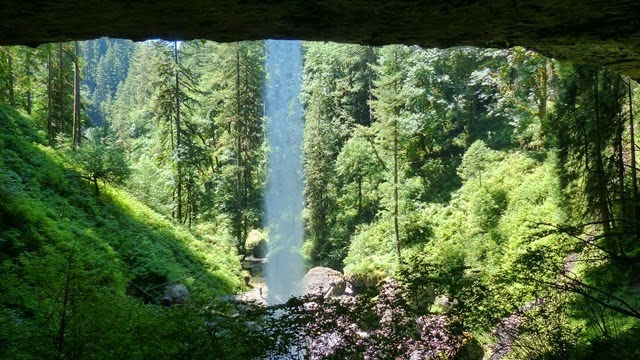 The trail continued to Upper North Falls, but I suggested we backtrack a mile or so then cut across at Winter Falls. We asked everyone we passed if they found a pair of sunglasses and finally spoke with a friendly couple who saw them on the trail behind Middle North Falls. They saw a man pick them up, so we were hopeful he might turn them in.

Winter Falls, which gets its water from snow melt, so is just a trickle in the summer. 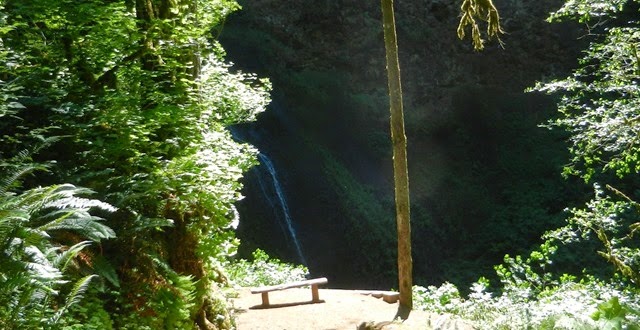 Because of the lost glasses we logged 8.2 miles of the 8.7 mile hike and only saw nine of the ten falls. It was still a very nice, though costly hike, since Jim just got the glasses at REI in Bend a few weeks ago.

We stopped at the park office, campground registration, and host site to inquire if anyone turned in a pair of sunglasses, but no luck. Jim said it’s only fair since the Maui Jims I’m wearing were found on a trail at Anza Borrego, although we did look for the owner. Give and take!

And we are now on the cool, breezy coast in Lincoln City, but more about that later…..