We’ve had a great month in Bend, but with temperatures near and above 90 predicted for the foreseeable future, it seems like a good time to move on. Between bike rides this past week we managed to replace the old 19” tube TV in Marial’s Lazy Daze with a flat screen 29”. It required some modification and installation of a mounting arm, but we figured it out, hooked it up along with a new Blue Ray DVD player, and it looks fantastic.

She also found a water leak from the toilet after filling the tank and turning on the water pump, but Jim located the leaky valve and was able to replace it. We were happy to be able to help since she’s been so kind to allow us to stay on her property all this time.

If only Jim had been able to fix our own problem, a malfunctioning generator, but that required a visit from a mobile RV repair person, who replaced the fuel pump. It’s now running better than we ever remember. If you should find yourself in Bend/Redmond/Sisters, Oregon, and in need of some RV repairs, give Rob Eastman a call at Courtesy RV. He was prompt, reasonable and very knowledgeable.

We rode downtown on the 4th to check out the pet parade. After getting a bit lost on the way the parade was just ending, but Jim did get to pet a couple snakes. I just couldn’t. 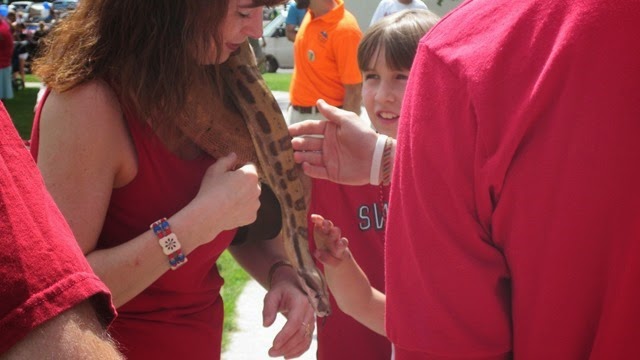 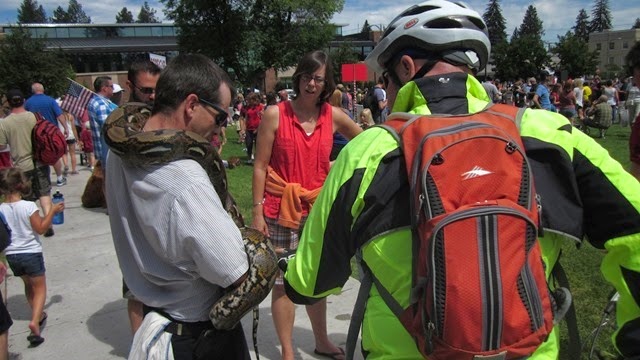 A cool bike sculpture off one of the trails in the Phil’s complex. It’s a really fun place to ride, especially the downhill sections. 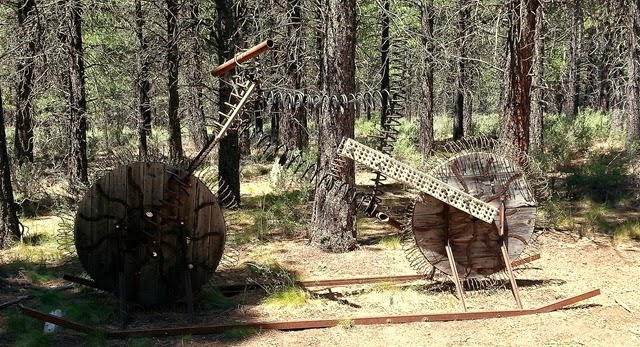 One day we took another drive up to Mt. Bachelor, which is now open for the summer season, although there’s still a good bit of snow. It was 10-15 degrees cooler, a nice respite from the 90 degree heat. 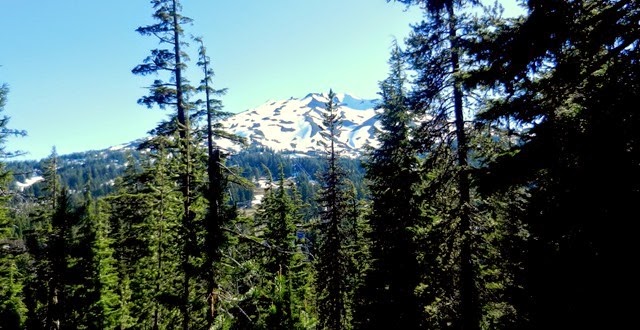 And of course on the way home we had to stop at yet another brewery, Old Mill Brew Werks. They have a huge deck looking out on the Deschutes River and the beer was pretty good. Out of the 19 breweries in Bend we managed to try 11 of them, not bad for a month. Guess we’ll have to come back and try the rest next summer.

Last night we met Marial at Broken Top Bottle Shop for one last dinner and a couple beers. They have at least 10 craft beers on tap but also hundreds of individual bottles to choose from. They also have many vegan and vegetarian items on the menu. We ate there three times and everything we tried was excellent. I think we ate out more times this past month in Bend than in all the years we’ve been traveling.

Today we’re going to pick up mail, take one more bike ride, and get things organized for heading out tomorrow. As much as we like it here it feels good to know we’re moving on. I think we’ve decided we’re not ready to settle in one place just yet, and the idea of a bigger RV, though tempting, seems like too much trouble. So where are we going next? Heads or tails…but it will be somewhere cooler.