Great Basin National Park’s slogan is “Half the park is after dark”. So we followed the instructions I received that morning to gather at 7:30 in the Summit trail parking area, elevation 10,000’, for the ranger-led full moon hike. Along the way we saw deer, rabbits, marmots and turkeys.

All 40 people showed up, along with 4 rangers to keep us in line, and we were given instructions to stay together, not use a flashlight, and keep as quiet as possible to listen to the night sounds. We would hike a little over a mile to Stella Lake, where we would watch the moon rise. It was still quite light when we started and barely 50 degrees. 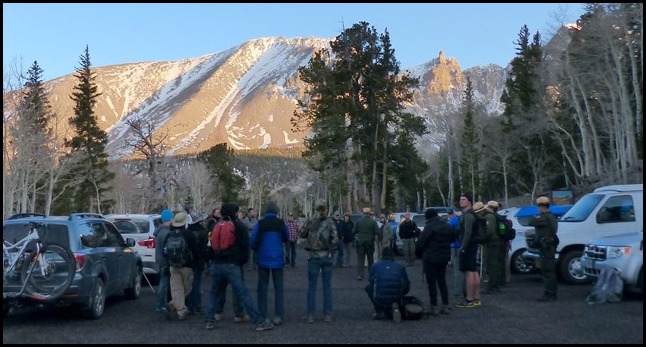 We stopped several times along the way while very nice Ranger Tom told us stories about the park and how to appreciate it after dark. 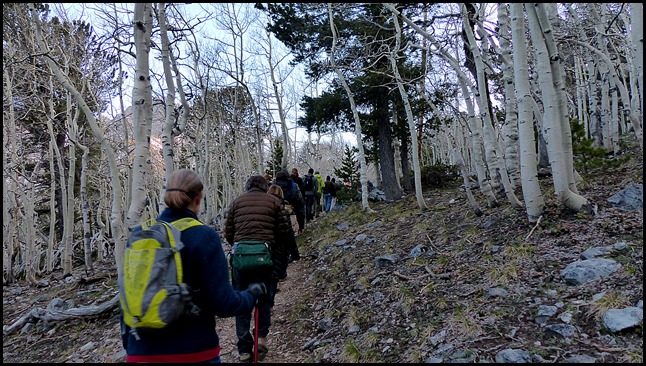 Although walking at this elevation is not so easy, the first mile of the Summit trail is actually fairly tame, with minimal elevation gain to the lake, and we had Jefferson Davis and Wheeler Peaks staring us in the face. Very impressive!

About half way to the lake we caught a glimpse of the moon through the trees. 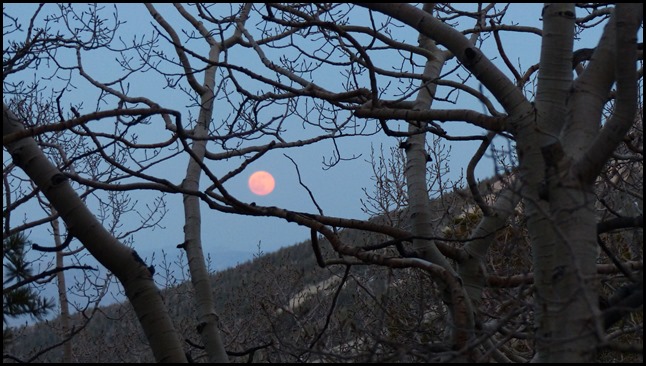 When we got to the lake the moon was behind the mountains so we stood around waiting for close to a half hour before it rose. Unfortunately the photos of the lake didn’t turn out, but trust me that it was beautiful. We decided we would have to come back the next day to see it in daylight. While we were waiting we did get to see the International Space Station go by, so we all waved to the astronauts. Wonder if they saw us… 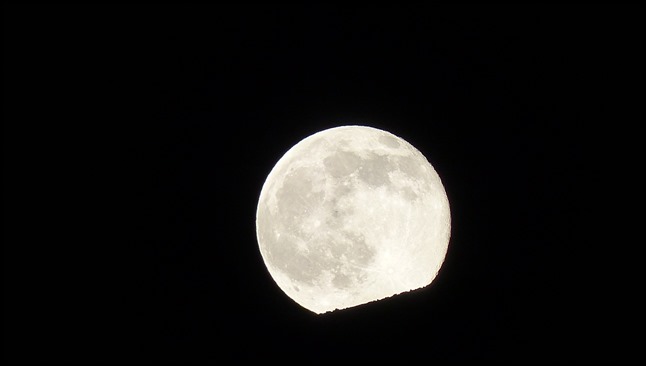 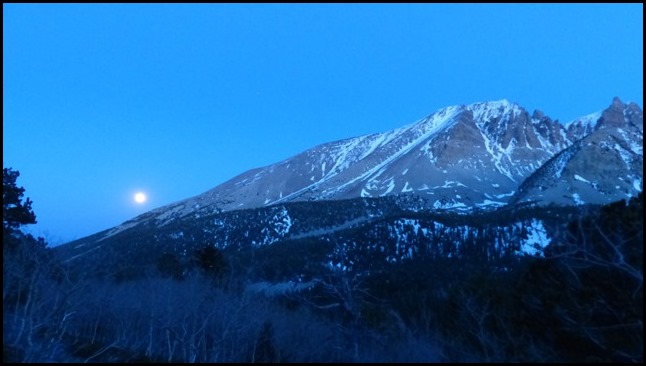 It was amazing how bright it was walking back down the trail to our cars, although some of the trail through the woods was a bit hard to see. We were surprised that many people made it with no falls or injuries. The drive back down the mountain to the campground was even more exciting in the dark dodging rabbits, who as we learned are crepuscular, which means they are most active in the early morning or early evening, but apparently love to play chicken with cars at night. Thankfully we didn’t hit any that we know of.

If you find yourself at Great Basin during a full moon, we would highly recommend this hike. The park also has regular astronomy programs on darker evenings.

The following day we drove back to the Summit trail to check out Stella Lake when we could see it better, and also to see how far we could get up the trail to Wheeler Peak, the park’s highest point at 13,064’. The trail starts at an elevation of 10,160’ and climbs almost 3,000’ in 4.3 miles.

No leaves yet on the aspen at this elevation. 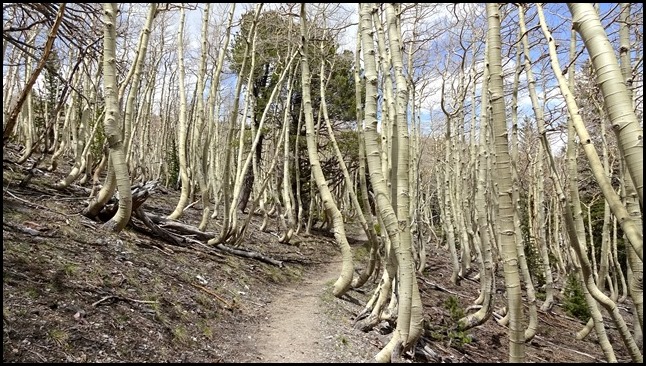 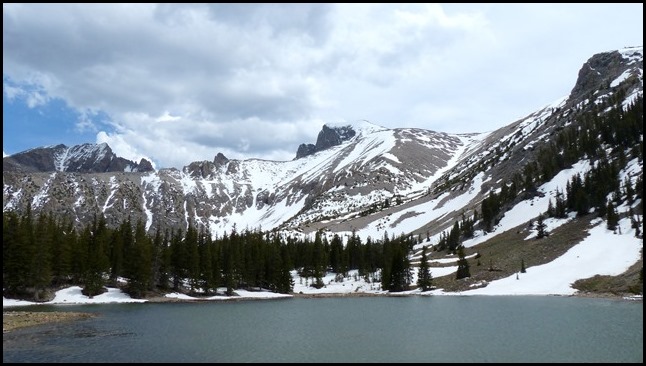 From the lake the Summit Trail gradually goes up through a meadow and winds back towards the mountains. 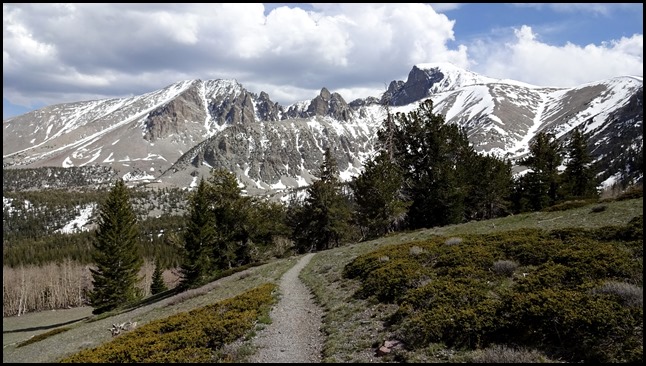 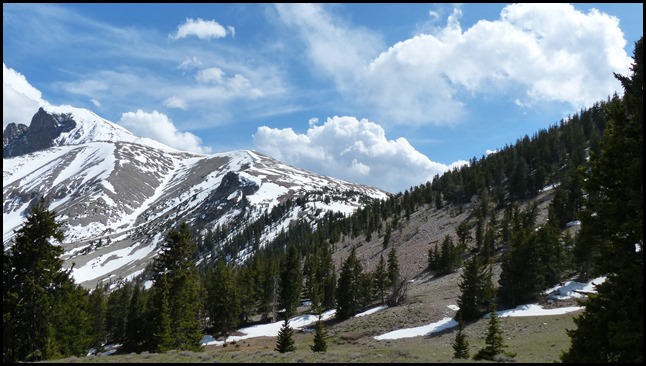 It passes above Stella Lake. 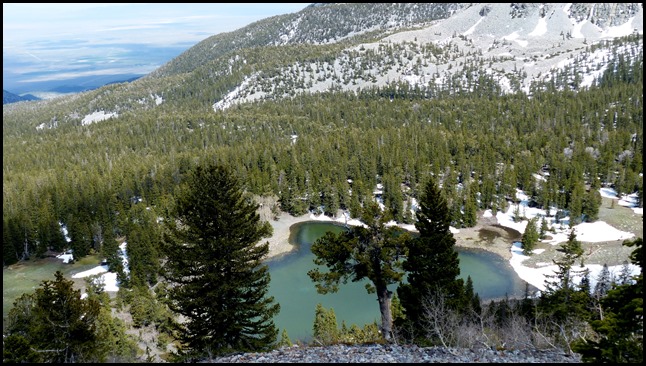 Where you get  a great view of the Great Basin. 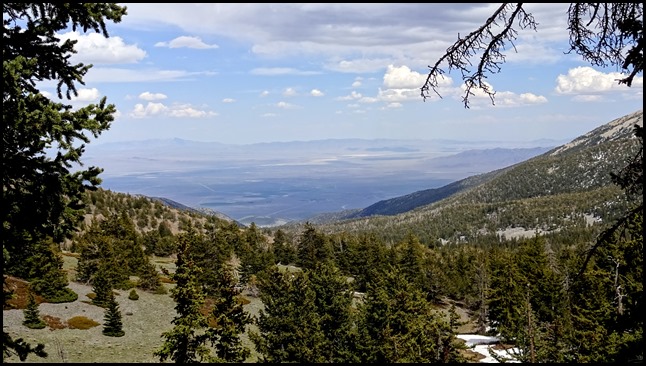 As we got closer to tree line the trail became very rocky. 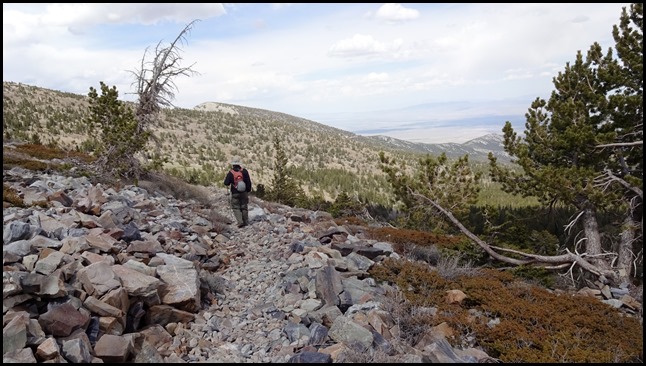 Then we began to encounter some snow. And very strong winds. 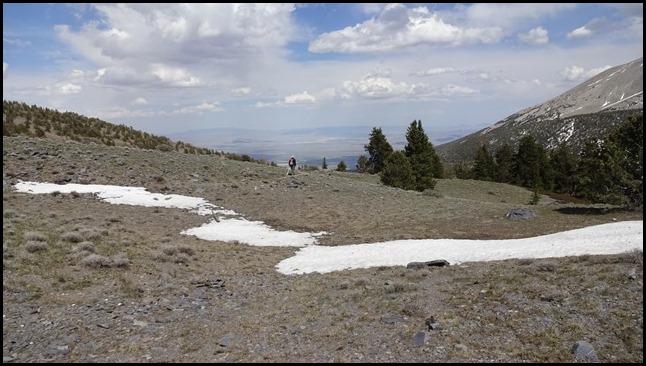 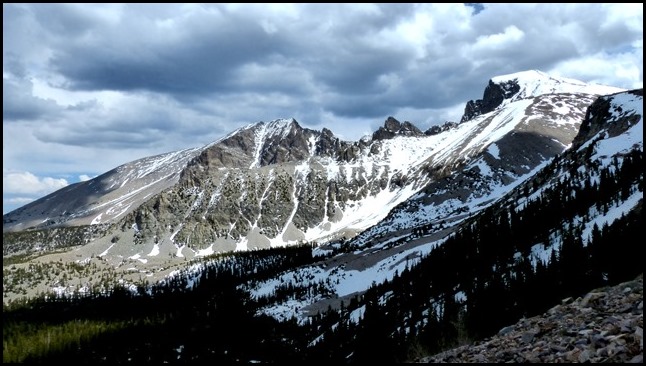 We had to go through several sections where it was knee-deep. 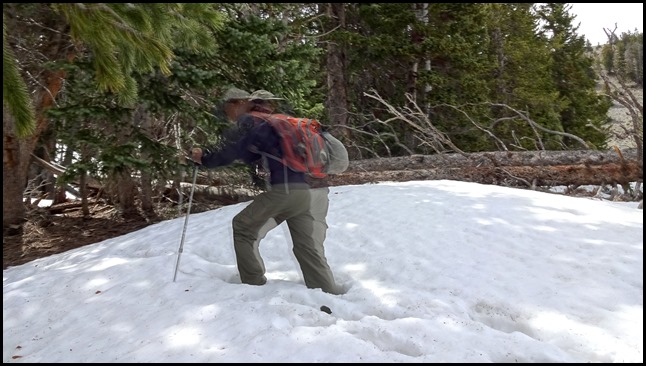 Then we lost the trail completely. No, we’re not getting up there today. The scenery was breathtaking along the 2.5 miles until we turned back. It was also an easy, gradual climb up to this point, so we know the rest of the way to the summit has got to be tough. 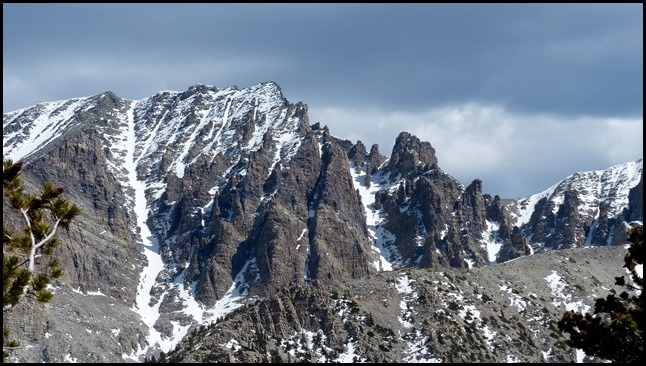 Jim is already talking about going back in the early fall when the aspen are changing and the trail is clear of snow to give it another try. Something about those mountains that calls to us. 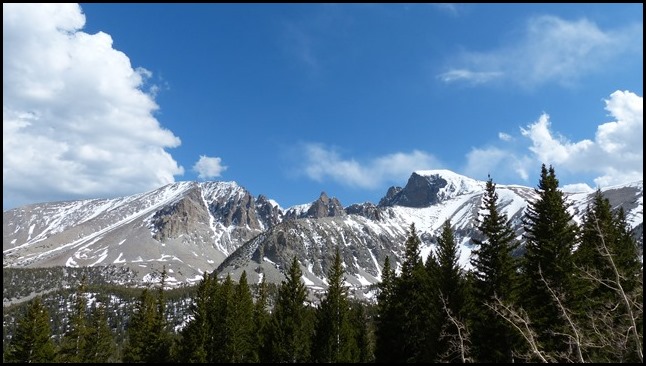 Great Basin National Park is definitely worth going out of the way for. And as an added bonus, we were prepared for no Verizon before we went since the coverage map showed nothing, so we were quite surprised when we had 3 bars of 3G and were able to use our phones and internet at the campground.

Jim here adding one more item. One of the rangers who led our moonlit hike has his own website of images are excellent and well worth your time. In fact, the day after the hike we ran into him again on the trail. He was heading up to shoot some time lapse at the lake. You can find his site here.