An Inspiration on Grand Mesa 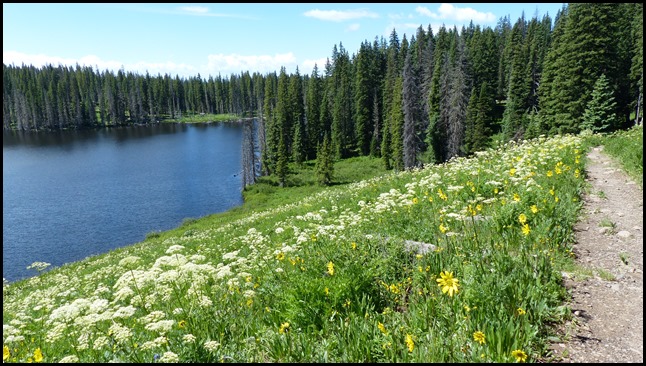 Our month in Cedaredge, CO is quickly winding down so before we leave we wanted to get in a little more hiking up the road on Grand Mesa. One of the first and best hikes we did there was the Crag Crest trail, so we decided to go back and hike the trail again, this time from the east trail head near the Crag Crest campground. It was supposed to be steeper going up from the east side but we actually found it easier, maybe because all of the snow had melted, or perhaps we’re getting a bit more acclimated to hiking at 10,000’.

Early on the trail passed by Upper Eggleston Lake. 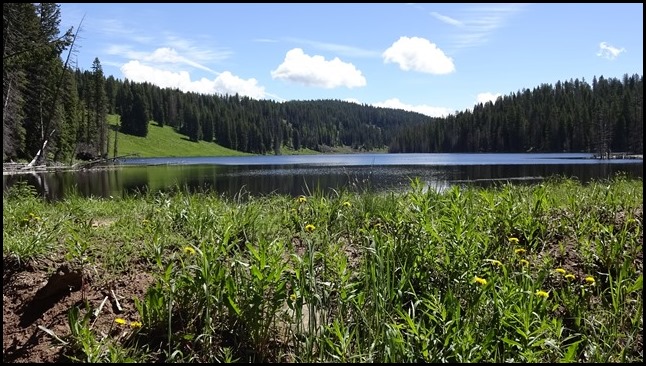 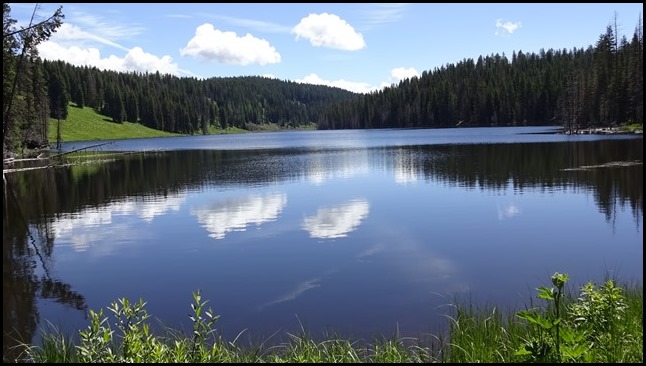 We’d gone a little under two miles when we came upon a gentleman resting on a rock. We stopped to catch our breath and began chatting with him. He told us he was with a hiking club from Grand Junction, and that if we saw them to tell them he was turning back. He said he was 92, and that last year when he did this hike he made it up the next steeper half mile to the crest, but this time he thought it best to go back at this point.

His name is David, and he was quite an interesting fellow. Told us that he broke a vertebra ice skating a year ago, and broke his leg biking in 2006, which would have made him “only” 83 at the time! After the surgery and hardware in the leg he decided it would be wise to give up skiing, but he still hikes and bikes. You just have to be inspired by someone like him and it gives us hope for our future. He said the key is to keep moving, which he’s always done. 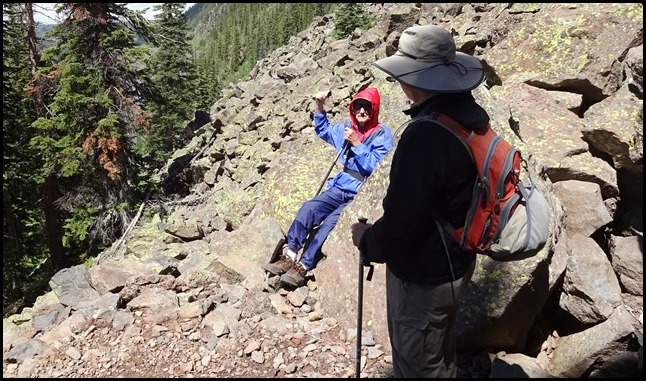 He was a delight to talk to, and we did meet up with the rest of his hiking group as they were coming down the trail. They were younger but still definitely senior citizens. One man told us David had invented mountain biking, rigging up an old bike with lower gearing and fat tires so he could ride the hiking trails he loved many years before it was even called mountain biking.

Inspired, we continued climbing as the trail got rockier and finally came it to the crest. 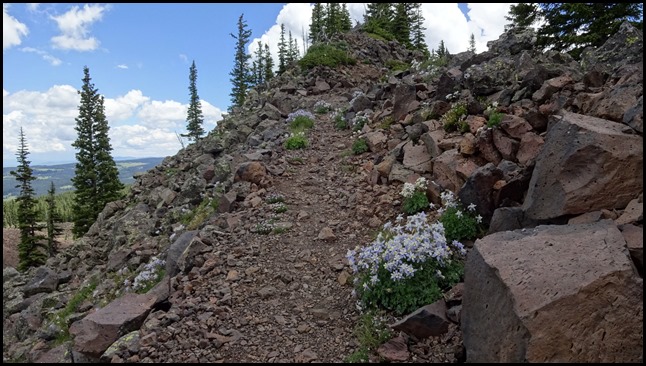 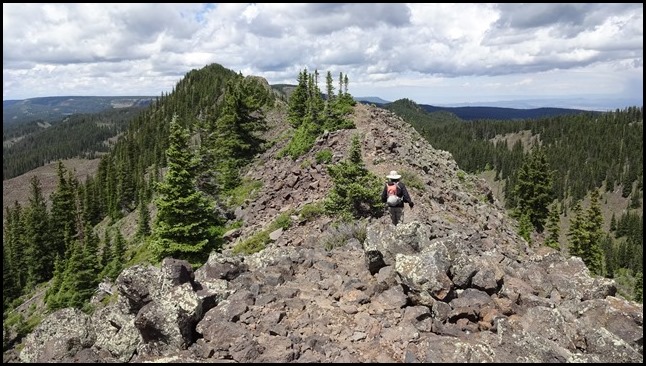 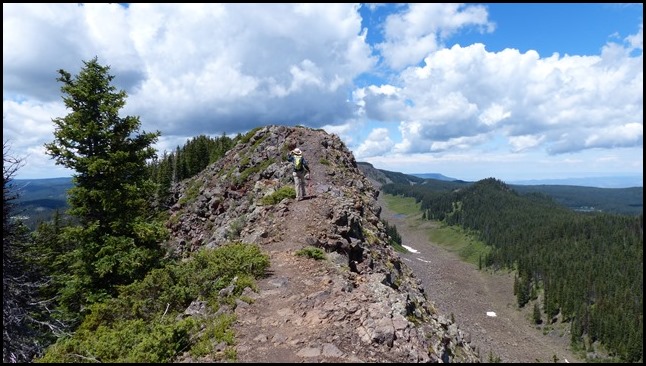 Being Saturday we did run into quite a few other people on the trail. We walked and talked a while with the couple in the foreground below who were on vacation from Albuquerque. They were a good distraction as we hiked along a very narrow steep section with drop offs on both sides. After we crossed it Jim asked me how I was doing, because he said it even made him nervous. Luckily I stayed focused on the trail just in front of my feet and tried not to look to either side to avoid a panic attack. 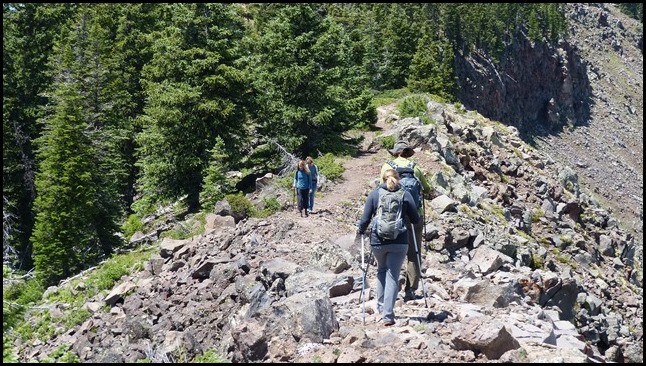 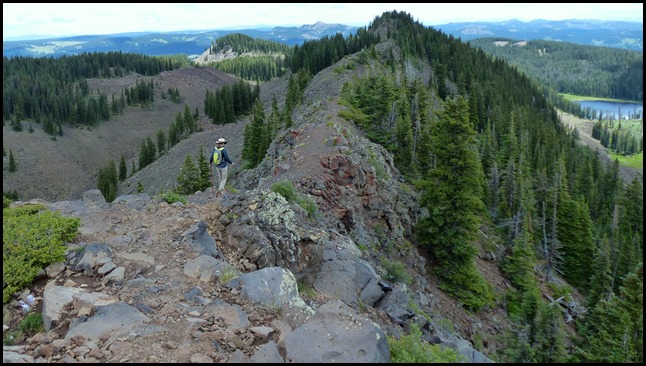 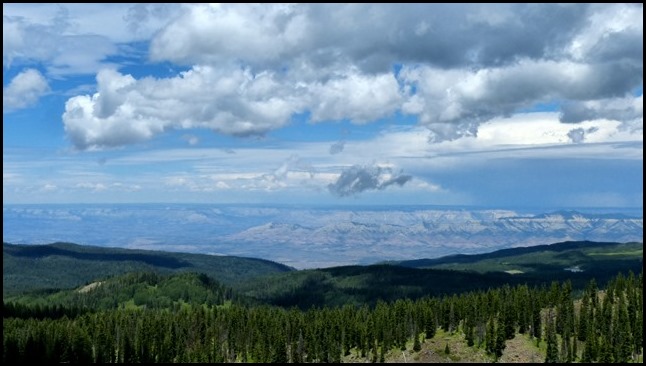 The trail along the crest goes on for a few miles. We were hoping to get to the point where we turned back a few weeks ago when we started from the west side, and would have gone farther but the clouds were building and there was a chance of severe thunderstorms between one and two. As usual, we didn’t get an early enough start and got off the trail at two. It was thundering and started raining about 5 minutes from the car. Sure wouldn’t want to be caught on the exposed crest during a storm. 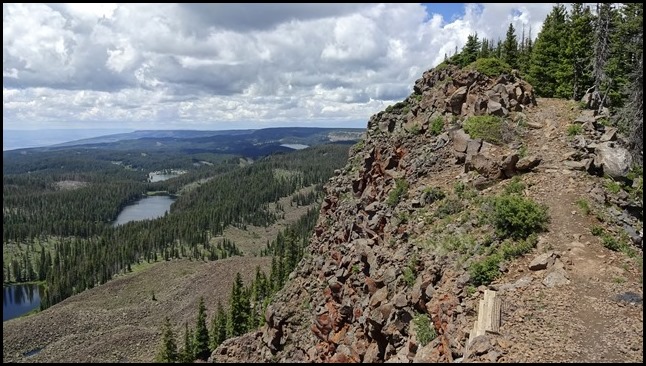 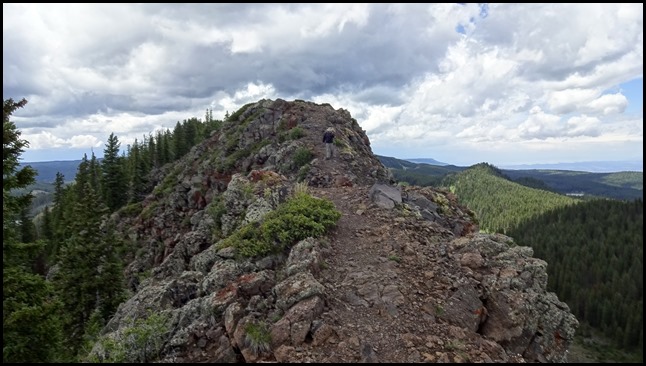 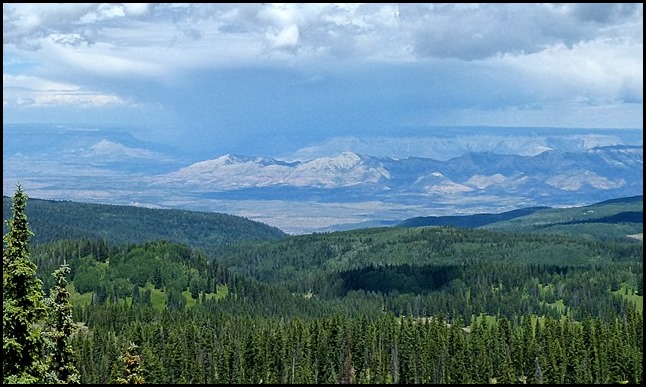 Don’t miss the Crag Crest trail if you ever find yourself on Grand Mesa. We were warned about mosquitoes being bad on the mesa in the summer because of all the lakes but didn’t find them to be a problem, although to be safe we always sprayed our exposed skin with Cutter Dry. No scent and non-greasy, it’s the first insect repellant that Jim doesn’t mind using.

With only a very slight chance of thunderstorms the following day, we decided to go back up and do an easier four mile hike around Ward and Island Lakes. It was lovely but there were still ups and downs, rocky areas along the lakes, and we lost the trail a few times. Doubt we could even do this one at 92! 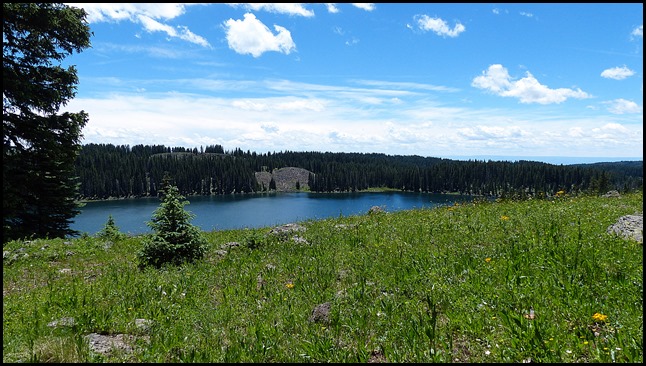 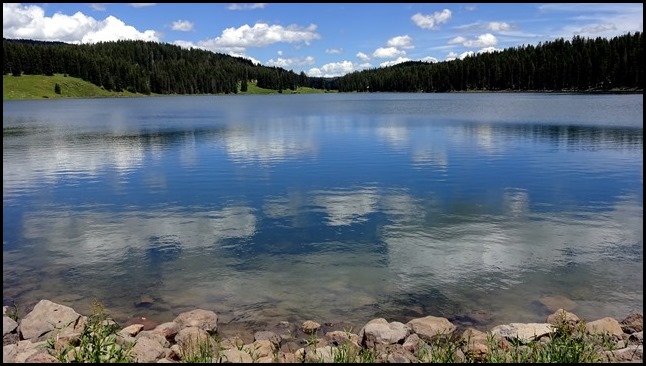