Leadville, Lost Man and a Leak

We are still in Twin Lakes, CO at the White Star campground, a very peaceful place, at least until Friday when the holiday weekenders arrive. On Tuesday we planned to do a hike but the weather didn’t cooperate so we took a drive to Leadville, at 10,152’ the highest incorporated city in the U.S. We were not all that impressed, but maybe it was the rain that made everything seem so dark and dreary. We walked the main streets, which have some interesting historical buildings, and looked in some of the shops. Downtown isn’t bad but the outskirts were rather dismal looking. It’s definitely a working man’s town, and from the looks of the rundown residential neighborhoods it appears to be a very depressed part of Colorado. Back in the mining days (silver and molybdenum) it was a prosperous town of 30,000 and now has a population of only 2,500. We would not want to live at this elevation, as winter must seem to go on forever.

We also drove around nearby Turquoise Lake, not the least bit turquoise on a rainy day, and checked out some of the campgrounds. In the drizzle and 51 degrees under cover of lots of trees, they were not very inviting. I’m sure we would have felt differently on a sunny day.

Later that afternoon it cleared up enough that we were able to take a walk from our site down to the trail along Twin Lakes to Deception Point. 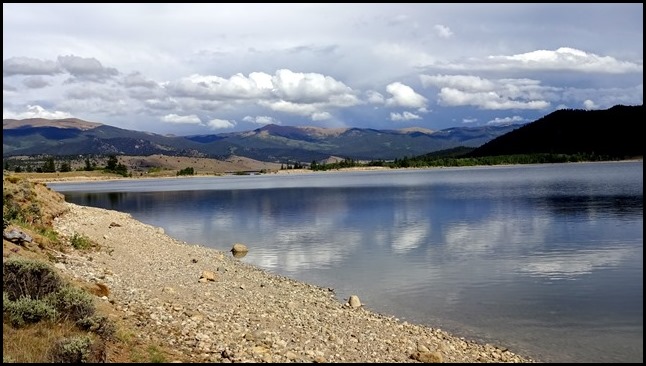 Below is Mt. Elbert, Colorado’s highest fourteener at 14,439’. We actually have a good view of it from our living room. One of the “easy” trails to the summit begins just a few miles from us. It’s 5.5 miles and 4,850’ of elevation gain. I can’t talk Jim into doing this. 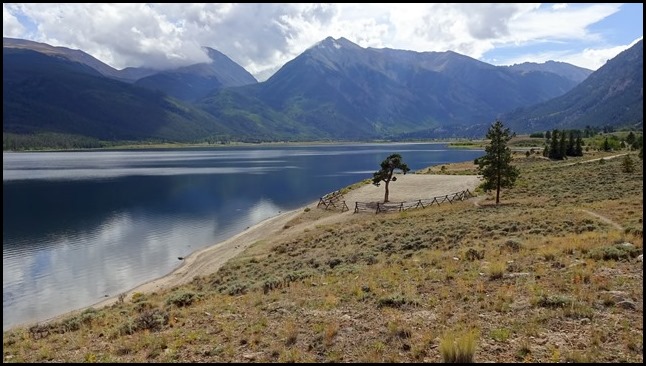 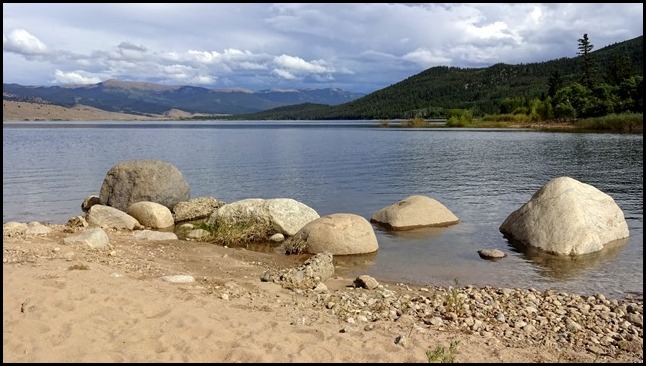 Tuesday we headed about 15 miles west up Independence Pass Road for a hike on the Lost Man trail. Our goal was Lost Man Pass, just 2.3 miles and 1,300’ of elevation gain. Didn’t sound too bad but it was a tough climb up. Luckily the scenery made up for the exertion and cold wind. We even got rained on a couple times but the thunderstorms stayed away until we got back to the car.

It was absolutely beautiful there in the Hunter-Fryingpan Wilderness. 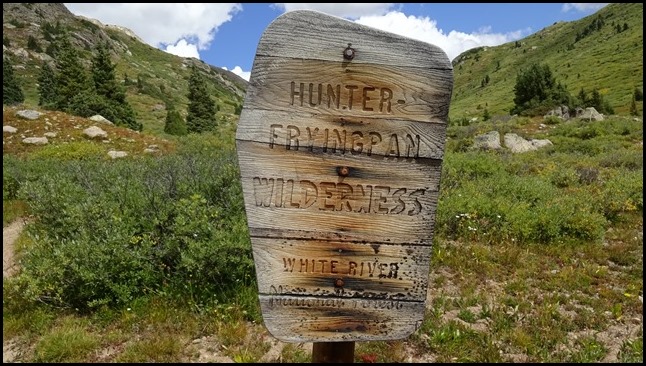 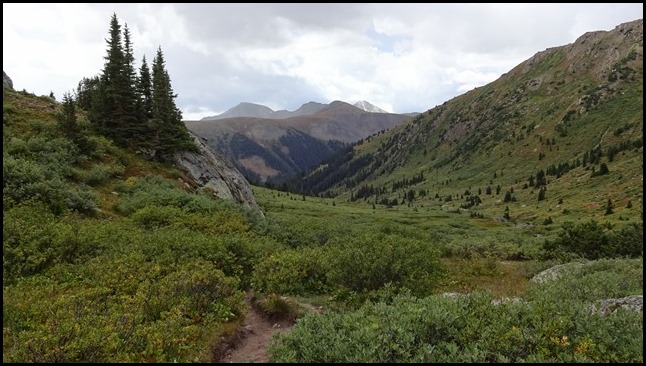 The trail runs along the Roaring Fork River. 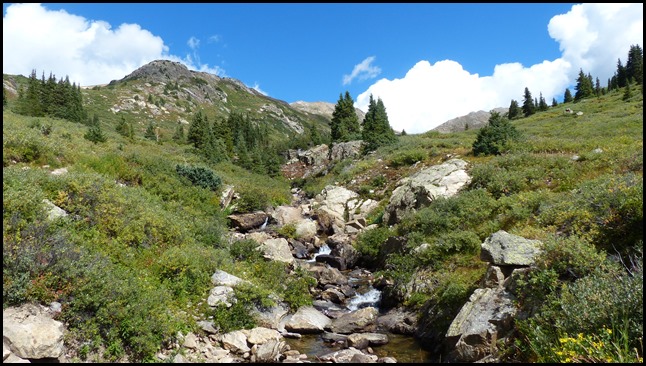 Looking back at Independence Mountain. 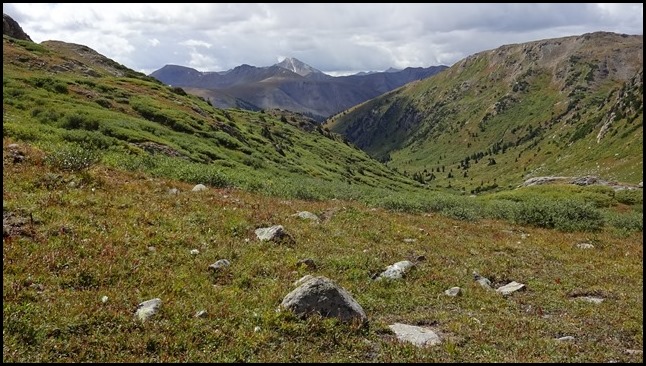 There were still quite a few remaining flowers. 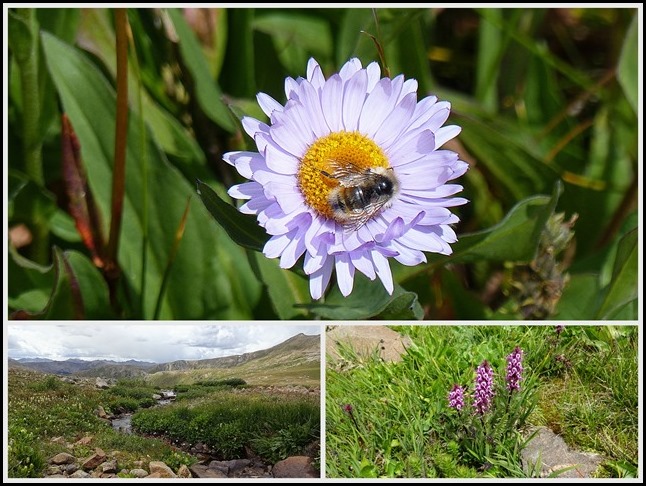 We were wondering which way the trail was taking us when we met a guy coming down. 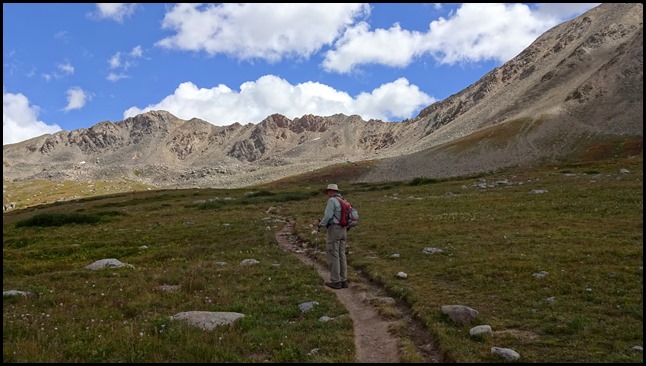 He pointed out our destination, Lost Man Pass, to our left. 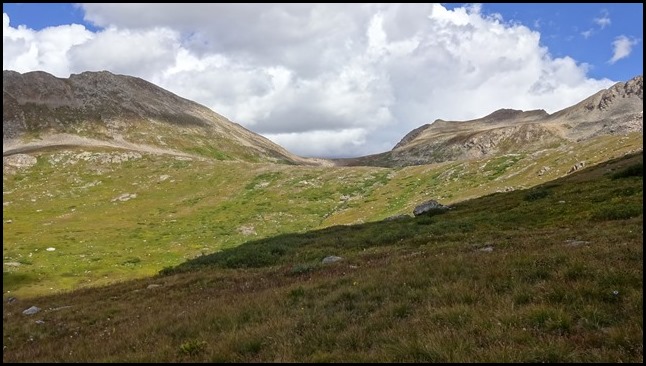 Getting closer to the pass. Jim was cold and considered going back but I wasn’t turning around. 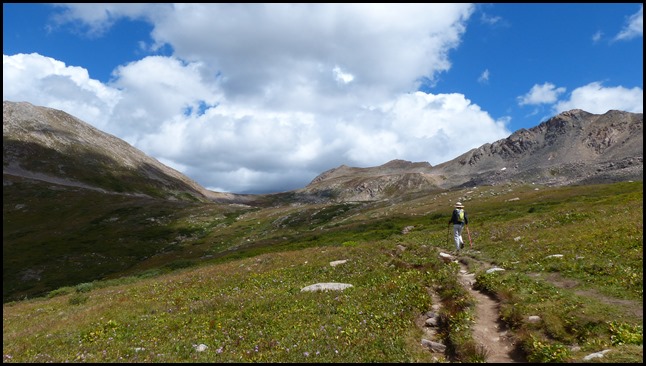 And neither did he. 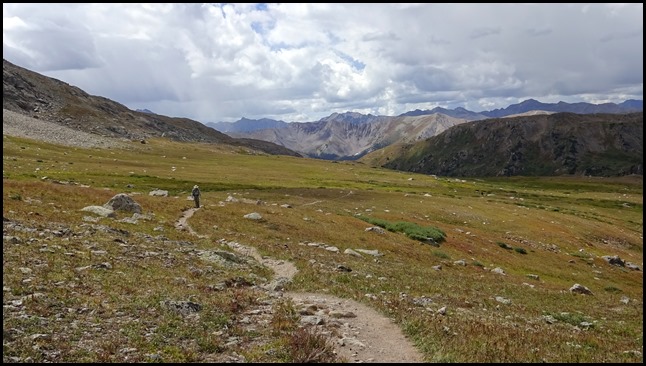 I  knew there was a lake on the other side of the pass but forgot we came to another before the final climb up. 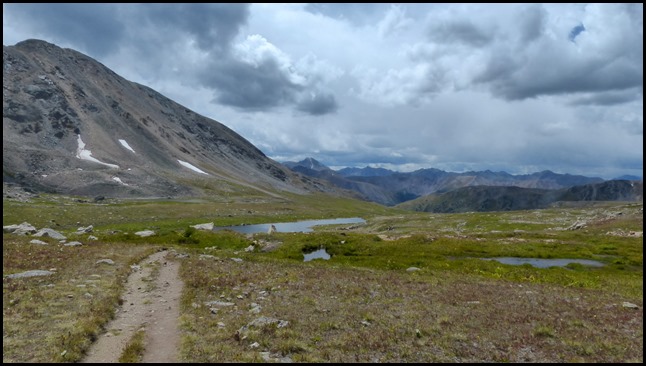 Independence Lake, the headwaters of the Roaring Fork River. 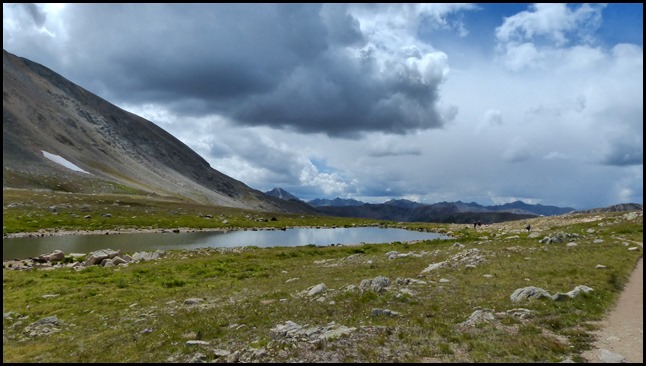 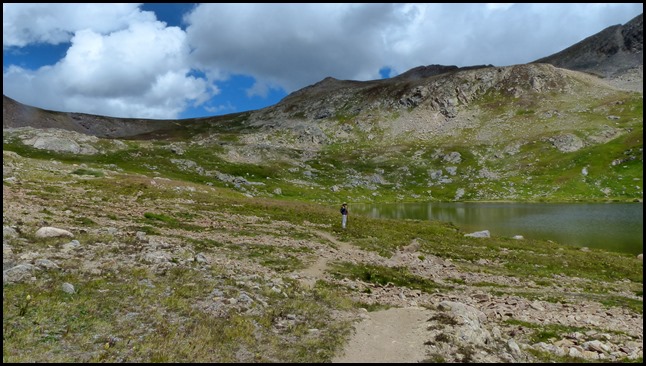 From the lake it’s still about a half mile and over 300 more feet of climbing to get to the pass. 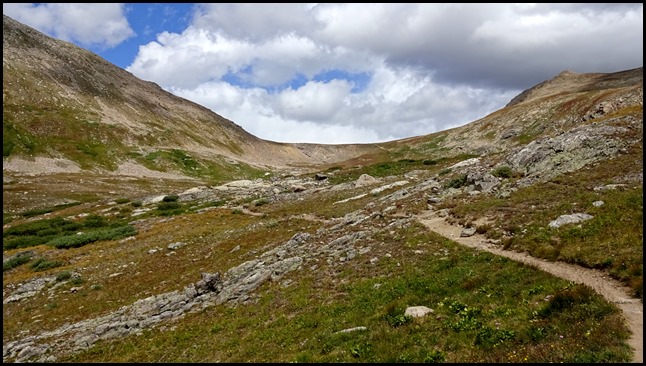 This was the hardest part of the trail. 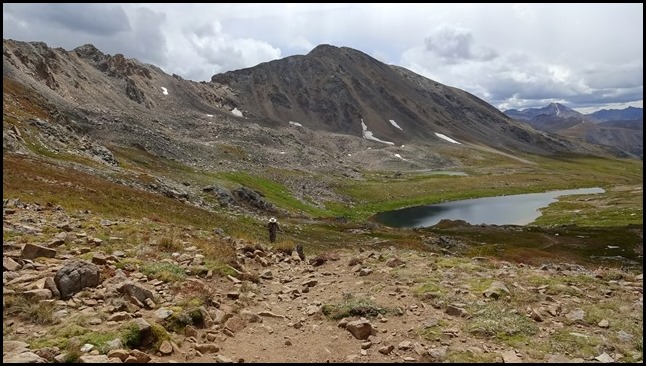 But what a reward for reaching the top. Panoramic views of Lost Man Lake, mountains, and Independence Lake. 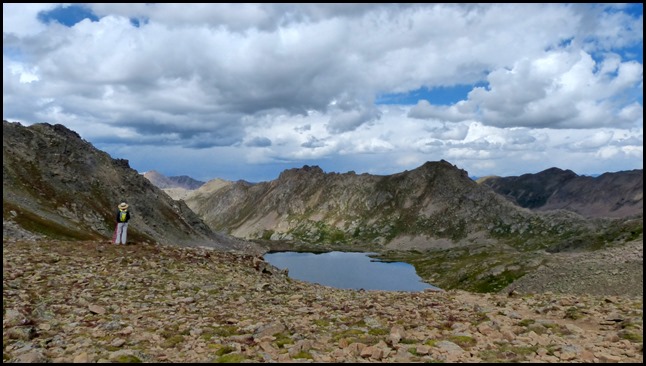 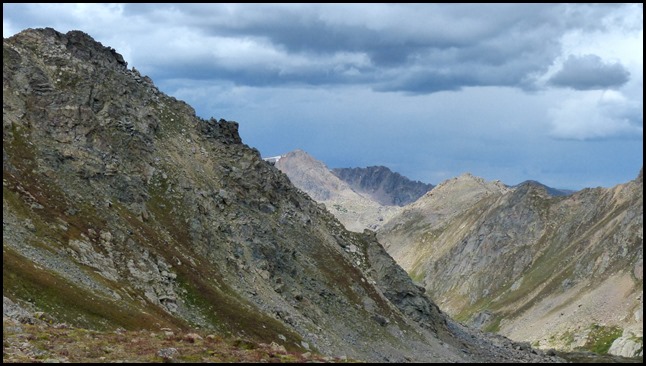 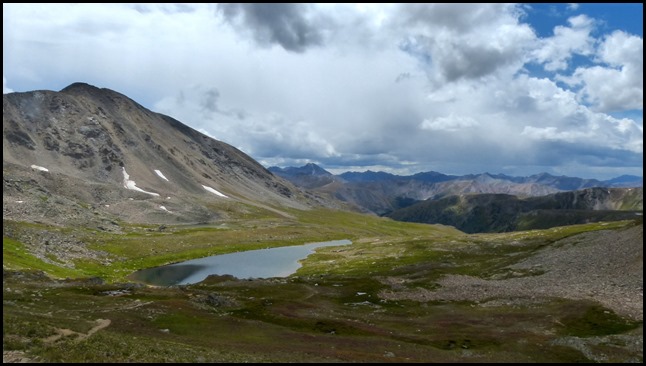 The wind died down and the sun came out just long enough for us to spend some time at the pass taking photos in the changing light and and eating a snack. 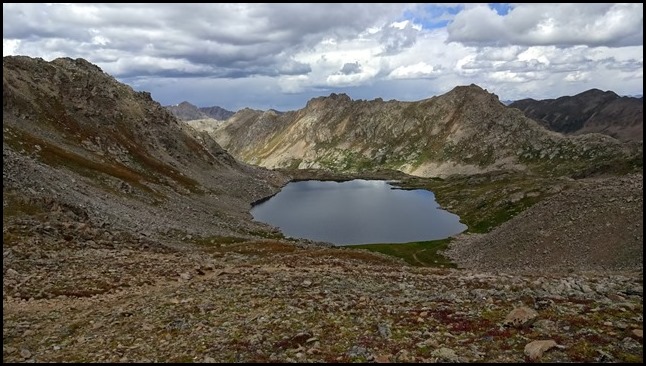 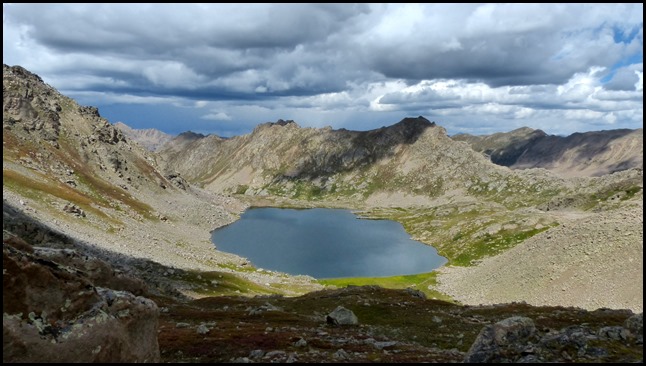 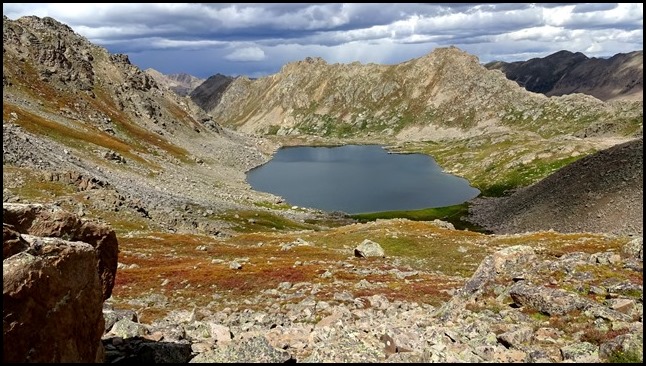 Looking behind us we saw the sky darkening and decided we shouldn’t linger. We got a little rain and thunder about a half mile from the car but it moved off. I love these high elevation hikes! 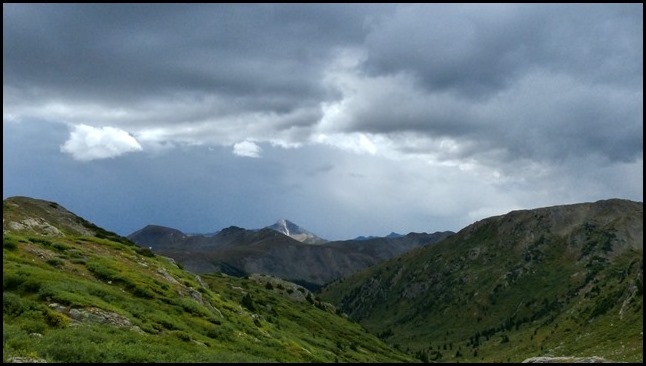 On another note, our water pump had been making odd noises for a while, mainly during the night, and a couple days ago it wouldn’t shut off when we turned off the water. It’s located under the bed, so we removed the mattress and found that it had been slowly leaking but not too bad. Yesterday morning was spent replacing the pump. We learned early on that it’s imperative to carry a spare, as we went through several bad pumps in our first year. After getting a different model this one has lasted since October of 2009. Of course Jim couldn’t get one of the compression fittings to stop leaking after installing the new pump but after removing and screwing it back on several times it seems to be dry. A good reminder to always turn off your water pump when you leave the rig.