The rain/snow finally quit on Saturday so we took a drive 15 miles northwest of Banff to Johnston Canyon, along with all the other tourists who were tired of staying indoors the previous two days. 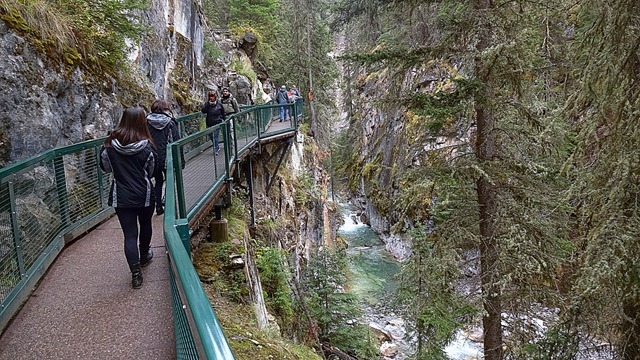 The first half mile consists of a catwalk hanging over the canyon. It is beautiful but there were way too many people on such a narrow trail. And of course there were quite a few with dogs and baby strollers. 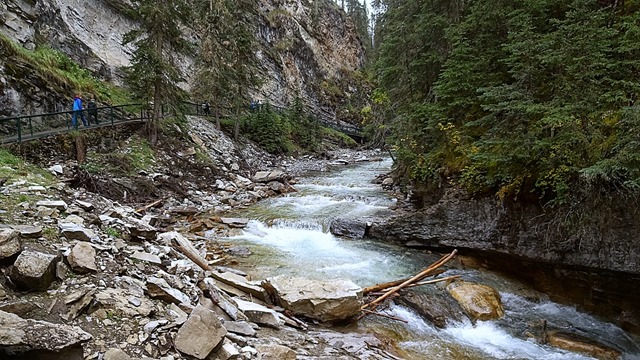 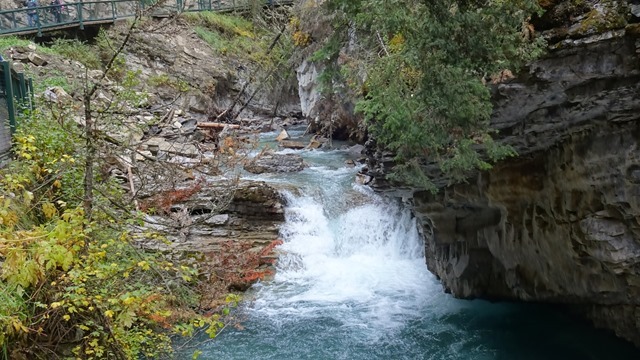 It’s just over a half mile to the lower falls, 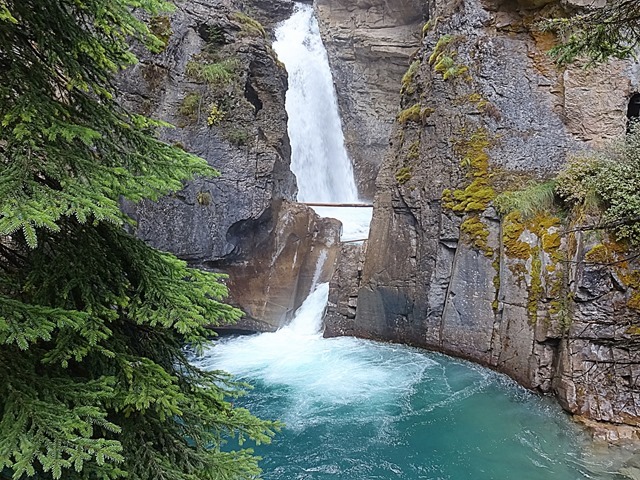 There is a tunnel in the rock where you can go in and get a closer view. Chuck and Carla waited for a few minutes but there were so many people they decided against it. 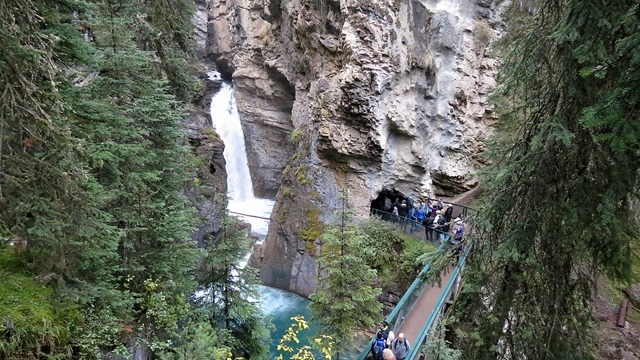 There’s the crowd at the viewpoint on the other side of the tunnel. 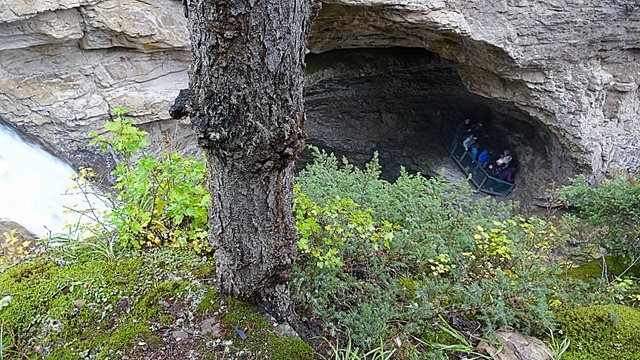 More catwalks and a wider asphalt trail continues climbing along scenic Johnston Creek for another mile and a half to the upper falls. We lost a lot of people after the lower falls. There is just one beautiful fall or cascade after another along the way. 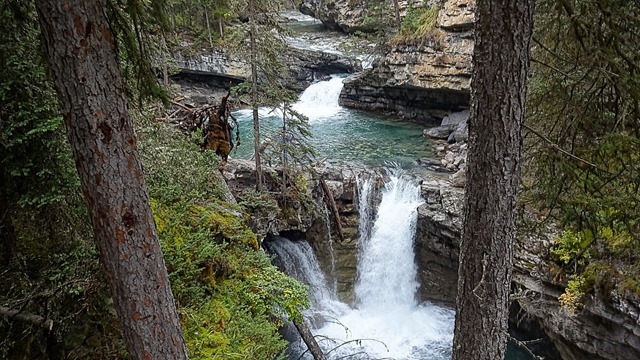 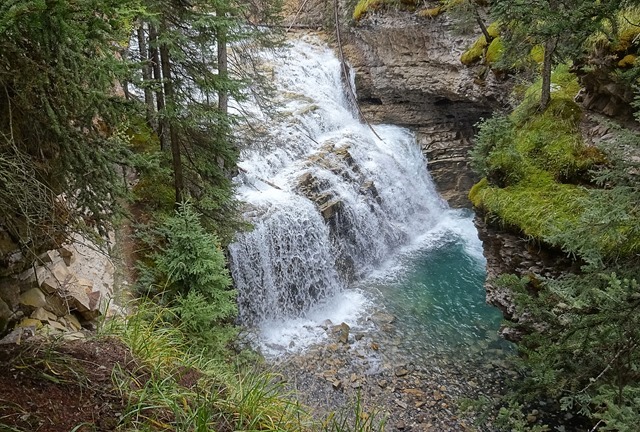 Jim made a cute friend. 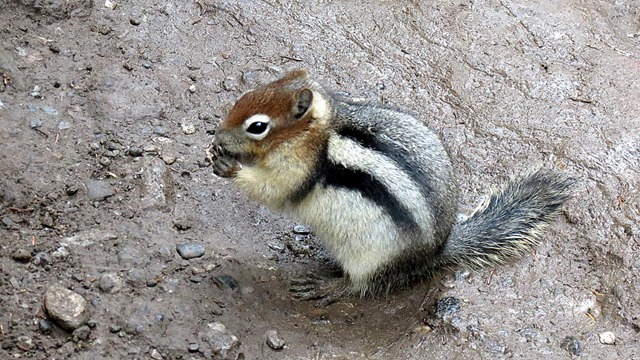 There are two viewpoints for the upper falls. The bottom of the falls is reached by a side-trail and catwalk leading to a viewing platform, where we took these photos. 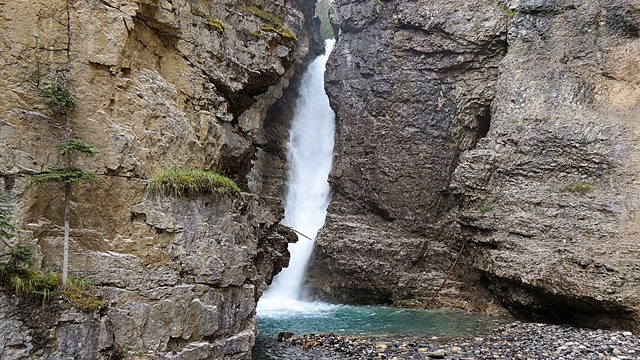 A rare photo of us with Jim smiling, sort of. Carla made him do it. 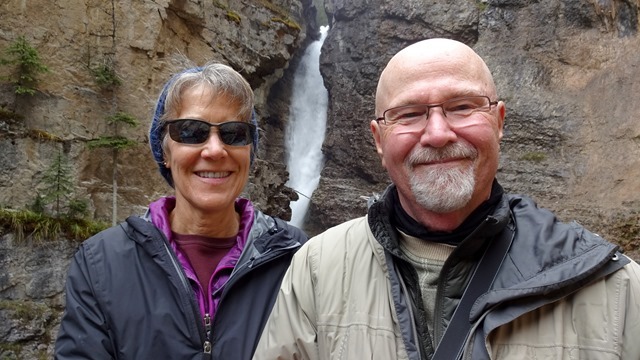 Then a short steep climb on the main trail takes you to the top of the falls and another viewing platform, which hangs out over the gorge above the waterfall. 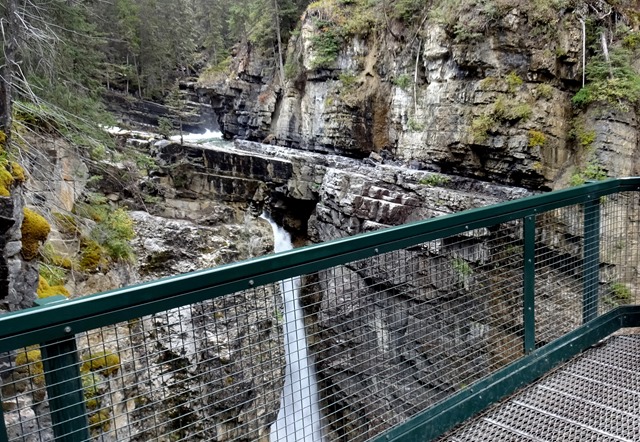 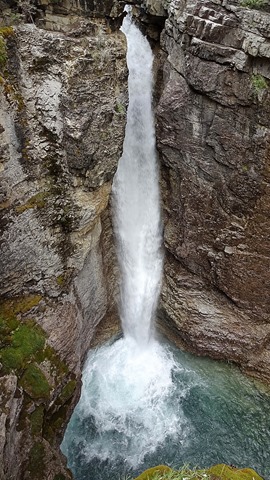 From here the trail continues almost two more miles to the “paint pots”, several cold bubbling mineral springs, but we turned around at this point. 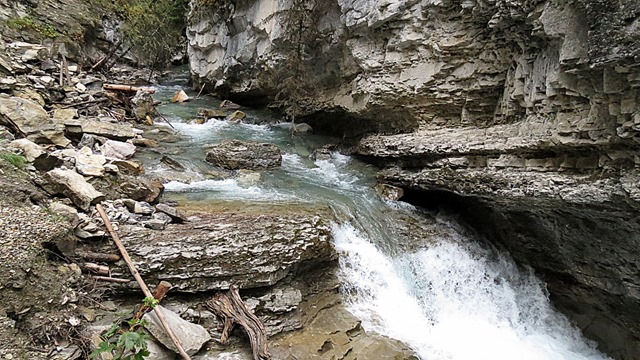 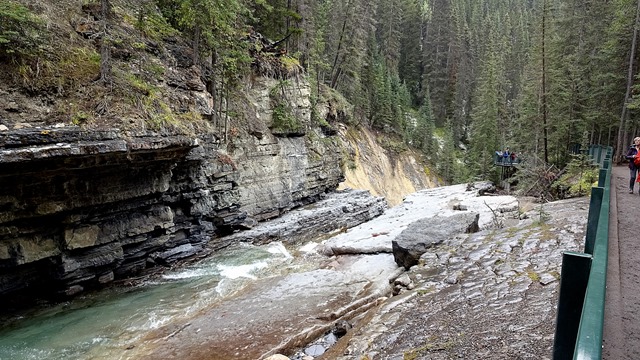 We woke up to this on Sunday morning, so everyone decided it would be a good day for a visit to the Banff Park Museum, also free admission with our parks pass. 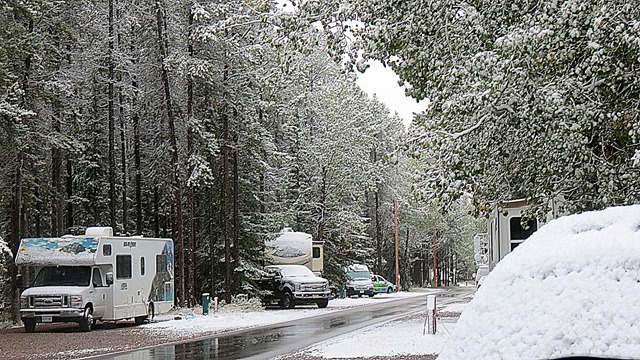 This natural history museum was built in 1903 so early visitors could see the park’s animals without having to actually go into the forest, even though they were stuffed. There was also a short-lived zoo and aviary on the grounds. The museum was scheduled for demolition in the 1950s, but it was spared and later restored for the park’s 100th anniversary in 1985. It’s a very nice building. 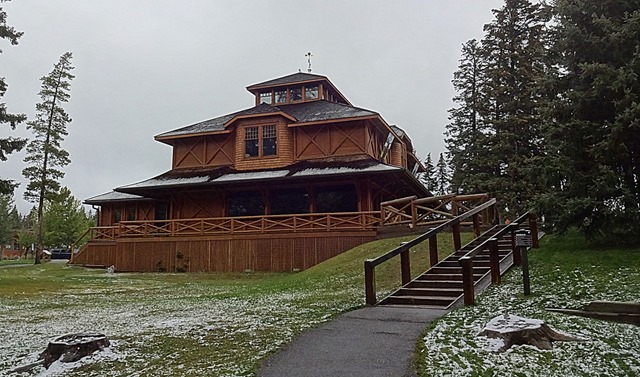 Some of the displays, which also include birds and insects. We all enjoyed it more that we thought we would. 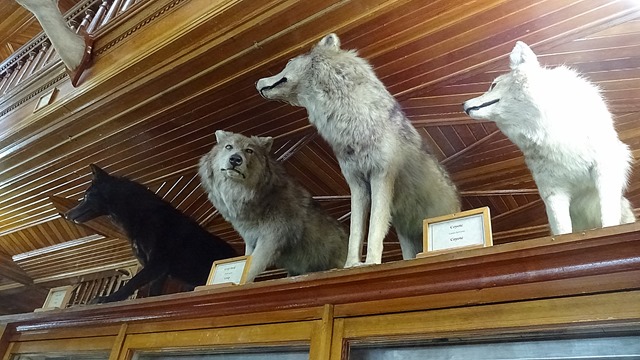 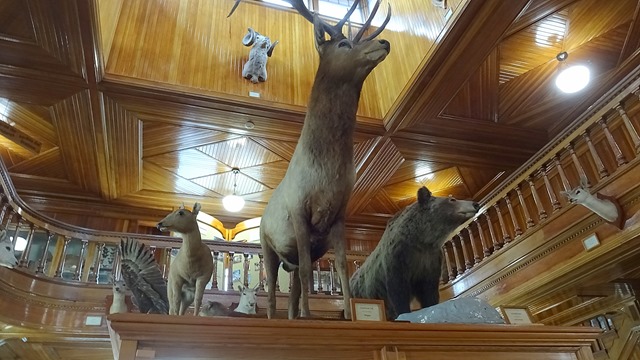 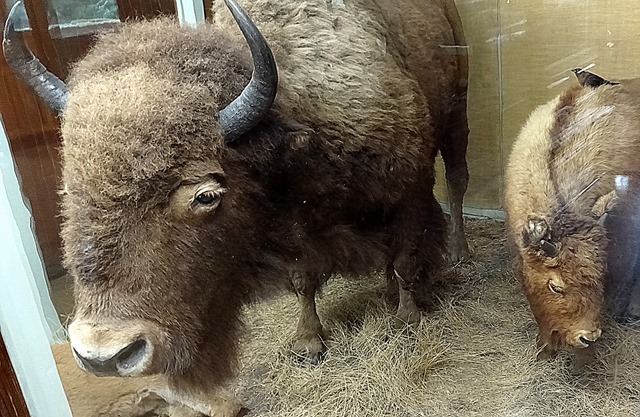 After the museum we decided to drive about 15 miles east to check out the cute little town of Canmore. It used to be a prosperous coal mining town but after the last mine closed in 1979, tourism took over. It’s also a popular place for movie making, such as big budget films Legends of the Fall, Snow Dogs, and the 2016 Leonardo DiCaprio film The Revenant. Canmore also hosted the Nordic events of the 1988 Winter Olympic Games.

We looked in some shops and had a great lunch and margaritas at Aroma Mexican Restaurant. Eating out in these tourist towns in Canada is not inexpensive, but at least we’ve been getting anywhere from a 23-30% discount due to the exchange rate.

This is the only photo we took in Canmore since it was too cold to take our hands out of our pockets. This translates to about 38 Fahrenheit. 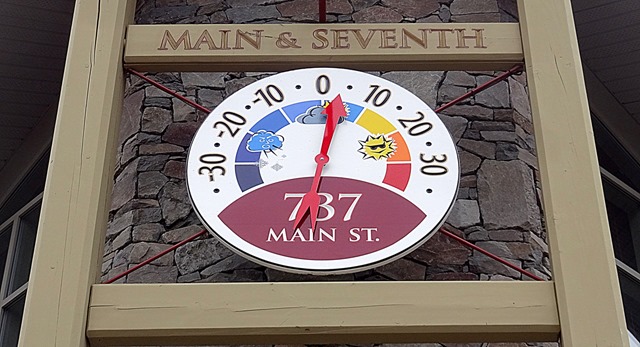 On our way home just a few miles from the campground we saw a couple cars stopped in the road, and for good reason. The bull had no intention of moving until a bicyclist came from the other direction and startled them. After seeing so many elk in Jasper we were happy to finally see some in Banff. 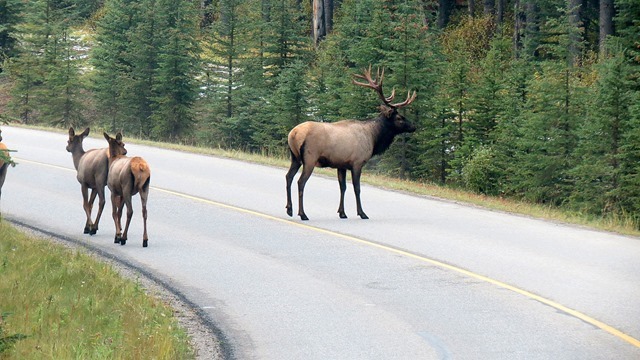 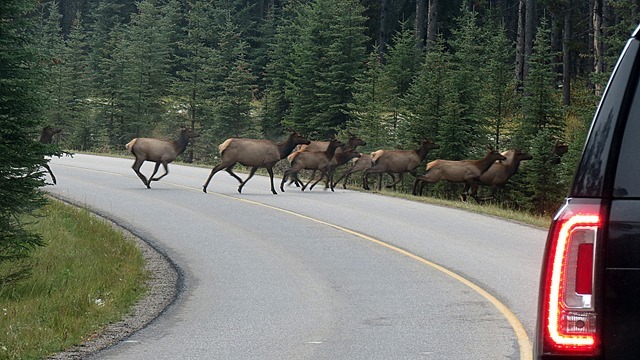