One of the reasons we came to Albuquerque this week was to attend The Rally, an annual RV show put on by the Affinity Group, which owns Camping World, Good Sam Club, Trailer Life magazine, and a few other RV related businesses.

Unfortunately, it was snowing while we were driving to the fairgrounds and by the time we left late in the afternoon it was raining and still cold. It was pretty seeing the snow on the Sandia mountains when we got back to the campground, though. 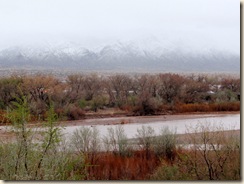 We enjoyed the Rally and all the vendors, which sold everything you could think of related to the RV industry. We spent some money on a couple really clever hose and cord holders by CordPro, RV polish,  a TV antenna booster, and crystal nail files. We also looked at many of the new rigs on display, although the only one we really liked was a 39’ New Horizons 5th wheel. It was really impressive, but for $134,000 it ought to be!  We also got to see a couple of  Born Free class C’s, which are often compared to Lazy Daze. Luckily we still liked ours better.

We also met up with Bill and Tina Pratt from Maine, more Lazy Daze owners who have been on the road since October. They are heading back home now, and it was fun to meet them and share our experiences.

Today it is clear but the clouds were still hanging over the mountains when we left. 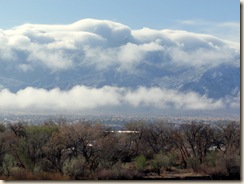 We are now in Bluewater State Park near Grants, NM. It was a lovely drive today along I-40 to get here. We want to believe the weather report that is saying warming to the mid 70’s this week, but we’ve been in New Mexico long enough to know it could change at any time. We still like it here, anyway. 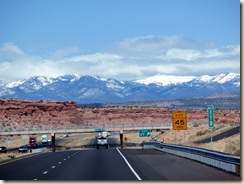 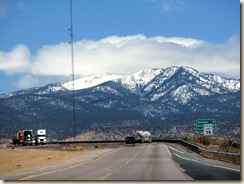