We spent the rest of our time here at Henry’s Lake State Park exploring the area around Island Park, west of Yellowstone. The city of Island Park was apparently incorporated by owners of the many lodges and resorts along Rte. 20  in 1947 to get around Idaho's liquor laws that prohibited the sale of liquor outside of city limits. It is only 500 feet  wide in most locations but 33 miles  long and claims to have the longest "Main Street" in the world.

It is mainly a resort area for fly fishing, camping, hiking and boating. We wanted to check out some of the Targhee National Forest campgrounds and do a little hiking. Yesterday we went to Upper Coffee Pot Campground and hiked the trail there. It is a 2.5 mile beautiful, fairly flat trail along the Henry’s Fork of the Snake River. It was one of the prettiest spots we’ve seen, and would definitely come back to camp there. This is the view from site #3. which was our favorite. No hookups, but some of the sites did have electric, and # 15 had a great view of the river, also. 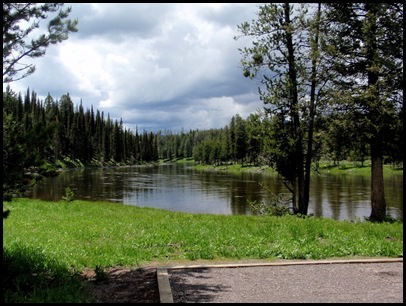 Here are some photos from the trail.  The river starts off so calm, but after a couple miles turns to some pretty rough rapids. 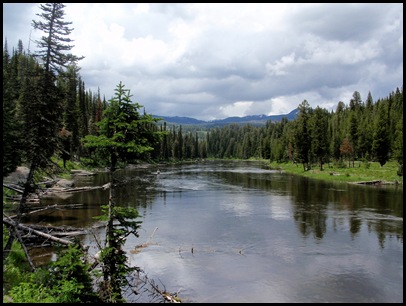 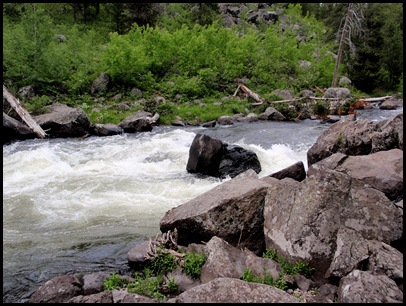 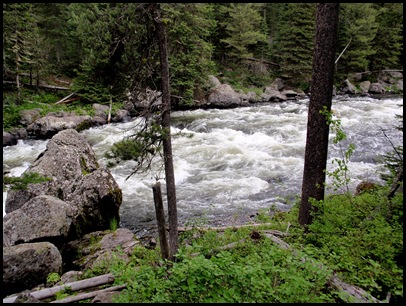 Today we went to the Box Canyon campground. Nice area with secluded, wooded sites but no views. The trail there goes along part of the Buffalo River as it meets up with Henry’s Fork. It was interesting as there was a small dam and hydroelectric plant and they’ve built a fish “ladder” system so the rainbow trout can get downstream.

Drove a little further down Rte. 20 to the Mesa Falls Scenic Byway, which is a beautiful drive to Upper and Lower Mesa Falls. Our falls photographer didn’t do a very good job today. He blamed the camera,  but I think it was the sun, which actually came out this afternoon after our morning rain stopped. It only got in the upper 50’s today, but we heard it was near 100 in Pensacola so we aren’t complaining.

This is the Upper Falls. 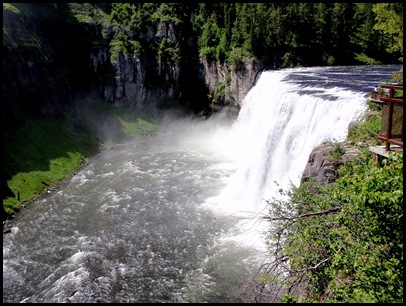 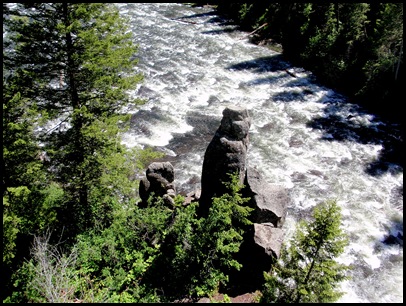 There is a nice walkway with overlooks and the restored Big Falls Inn, which is now used as an interpretive center. 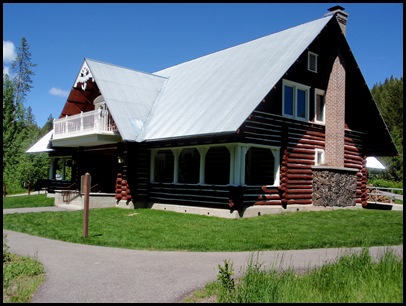 This is the Lower Falls, but you can’t get close to it like the upper. 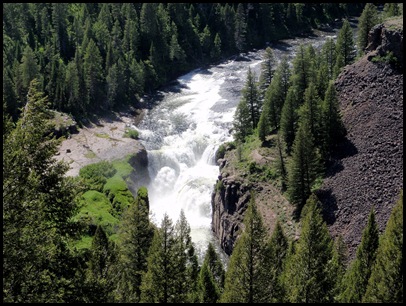 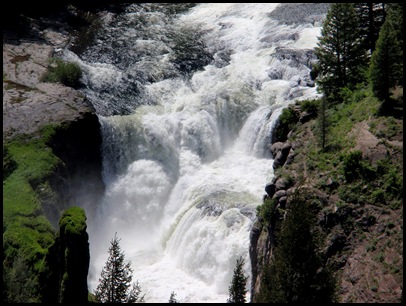 This has been a great area to spend some time. It’s off to Bozeman tomorrow. There is supposed to be great gourmet pizza restaurant there!