Our short 15 mile drive south to Cattail Cove State Park ended up taking over an hour and a half yesterday morning. An ambulance passed us shortly out of Lake Havasu City, and sure enough there was a major accident on Hwy 95 a few miles ahead of us.

When the Life Flight helicopter came to the scene we knew we were in for a long wait. There was a pick up truck towing a long travel trailer that flipped and rolled. The truck was crushed and on it’s roof. The trailer was demolished and debris was everywhere. I read online this morning that the preliminary investigation showed that a strong wind gust caused the truck to veer off the road with 5 people and 3 dogs inside. Only one was killed, which is amazing considering how bad it looked when we finally got by. Also 2 of the dogs were found but a chihuahua was missing. Sad story.

The area around this park is beautiful but the campground isn’t the greatest. We do have water and electric at our sites, though, which is really nice since it got in the low 30’s last night and is supposed to be cold for the next several days. They had the pay for 5 nights, get 2 free deal, so we signed up for a week. The nightly rate is $23 but with the deal it comes to a little over $16/night which is well worth it to be able to run our electric heaters! 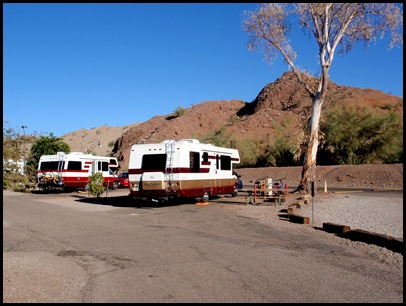 We have no TV at all here but a fairly good internet/phone connection. No malfunctions of anything yesterday at our place but Debbie’s 2 week old Cradlepoint router quit working yesterday. It replaced the one that died a few weeks ago, so I guess our bad luck is rubbing off on her.