Pickleball and a Hike

We tried a new sport this week, pickleball, which is a cross between tennis, badminton, ping pong and racquetball. It is played on a badminton court with wooden paddles and a plastic ball with holes, a little smaller than a whiffle ball, and is becoming the latest craze for the over 55 crowd. Sorry, shuffleboard!

We were invited to come and play with the group that plays every morning at 8, but before we attempted to join in, we decided to give it a try one afternoon when nobody else was on the court. It was fun but much harder than we expected. We played racquetball for many years, so we thought this would be similar but easier. Wrong! The ball doesn’t bounce very high, the paddle is much shorter than a racquetball racquet, and the holes in the ball cause it to bounce erratically, making it easy to miss. We got a really good workout, but Jim was envisioning his back going out during every lunge. At his advanced age he thought it was too risky for him, but I may go up one morning and join in on a doubles game. Here we are attempting to play. You can see how I won by serving to Jim while his back was turned. 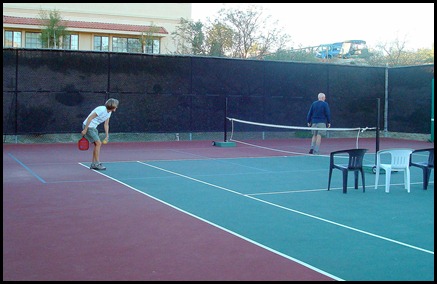 Tuesday morning we were invited to join the hiking group for a 6 mile hike on the Pacific Crest Trail. They were to meet at 8 in Friendship Hall and carpool to the trail head. I had to do a lot of persuading to get Jim up and ready so early, but we arrived a few minutes before 8 and saw a sign that the hike had been cancelled. Since we didn’t know where the trail was, we drove to one we had seen at a Forest Service campground, Dripping Springs, a 7 mile trail in the Agua Tibia Wilderness section of Cleveland National Forest just a few miles east of Temecula. It was in the low 40’s when we started out, but it quickly warmed up as the sun got higher and we climbed and climbed. We turned around after a couple hours, and enjoyed the beautiful views along the way. 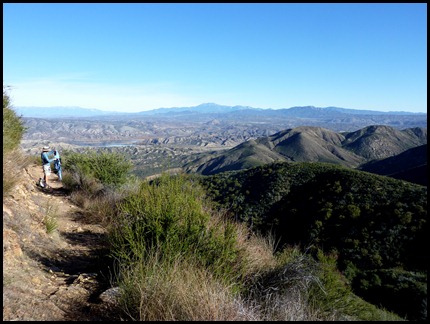 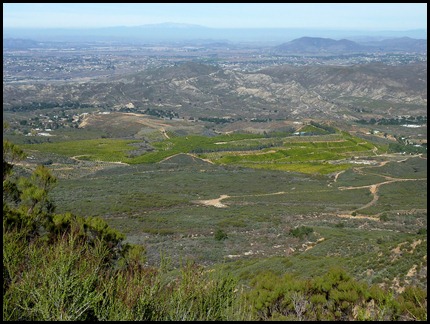 The sprawl of Temecula and beyond to the Pacific. We think the haze was a combination of fog and smog. 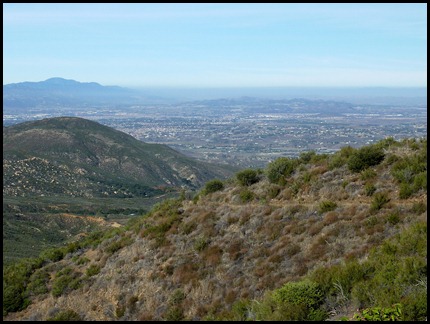 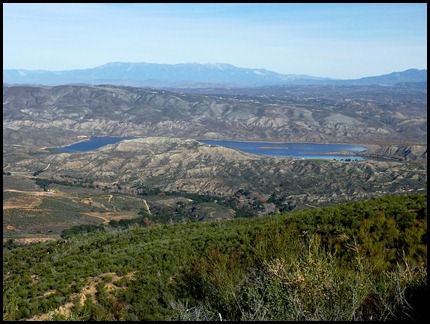 And the best part was we didn’t see another soul on the entire trail.

This afternoon at three is free ice cream at Friendship Hall. Guess we’ll have to stop by on our way to the gym. We like it here!