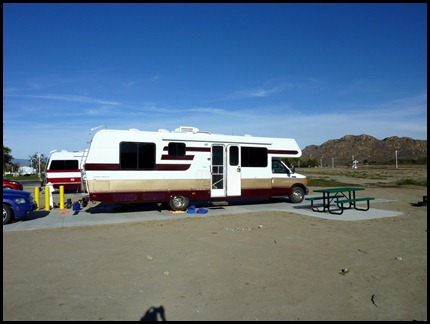 Yesterday we moved on 80 miles west to Rancho Jarupa, another Riverside county park. The nice thing about these parks is they accept Passport America on weekdays, so we are paying $12.50 a night for a site with water, electric, sewer, WiFi and cable. A real bargain for California.

Their registration process is quite tedious, though, since we had to produce a driver’s license, registration and insurance cards for the RV, along with the Passport America card. Apparently they had an incident where someone sued the park for damages caused from a stolen, uninsured trailer, so now they won’t let you in without proof of ownership and current insurance.

We are in the new section of the campground, but they ran out of money before completing it so our sites are pull through but they never finished the road we are supposed to pull through. So we will have to back out when we leave, which is no big deal. The other thing we don’t have is grass around our sites. We could have paid half of $35 for a grassy pull-through, but we’ll be gone during the day, so it didn’t matter to us. 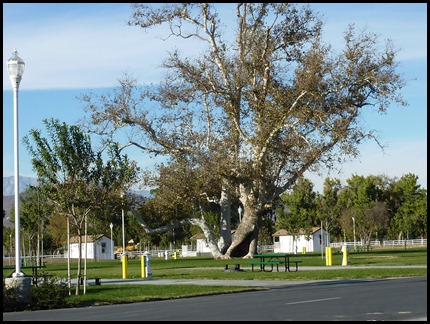 When we were dumping before we left Lake Cahuilla yesterday, Jim noticed a little drip from the black tank valve. Many months ago the handle broke, and he bought a new handle and the entire valve assembly in case he wasn’t able to just replace the handle, which he did. Since the valve had been hard to open, he kept the assembly for future replacement, and it turned out yesterday was the day.

It was a dirty job, but somebody had to do it. 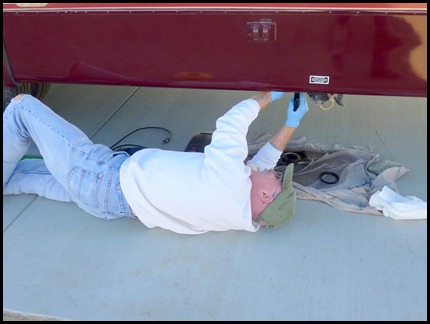 And it only took him about ten minutes. He said it was one of those jobs you want to finish as quickly as you can!

Today we are going to visit the Lazy Daze RV factory in Montclair, only 22 miles from here.