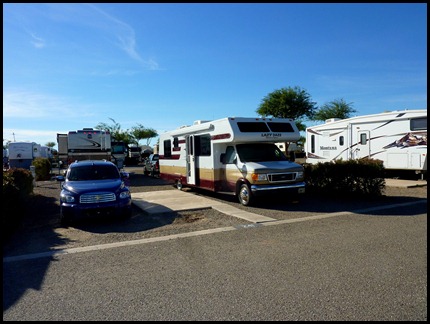 It was a short 36 miles from out spot in Anza Borrego to Rio Bend RV and Golf Resort, 5 miles west of El Centro. It is a nice RV park, but even with our Passport America discount, still cost $25 a night. We do have full hookups and cable, though.

The park has 500 sites, but it looks maybe half full, and there are quite a few park models. Most of the license plates are Canadian. Since we are only 4 miles from the El Centro Naval Air Facility, there are military planes flying overhead all day long, beginning about 7AM. Jim can’t understand why anyone would spend the entire winter here, with the noise, but I guess it beats the cold and snow in Canada.

And they have a great exercise room, pool, restaurant and lots of planned activities for the snowbirds. 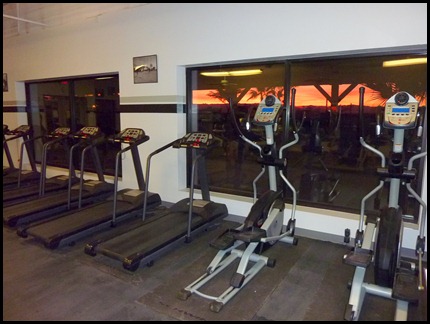 El Centro is the largest city in the US that is below sea level, at –50 ft, so the winters are usually pretty mild. In fact we’re to have low 80’s this weekend, which sounds great to us. El Centro’s other distinction is having the highest unemployment rate in the country, which was 29.3% as of Dec. 2010.

We went to the bank, post office, and mall yesterday afternoon, and felt like we were in a foreign country (think Mexico). We only saw a few other Anglos  wherever we went, and rarely heard anyone speaking English. Guess that shouldn’t be surprising since we are less than 10 miles from the Mexican border. We aren’t too impressed with El Centro, but we weren’t expecting much.

The sunset last night was something, though. 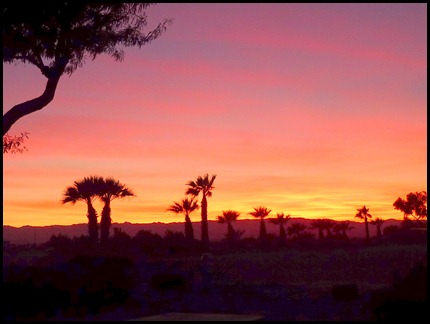