Jim was recovering nicely, and then on Monday he started having pain on the right side of his back in the same place he had it before his gallbladder was removed. The first couple days it was intermittent, but by Wednesday night it got pretty bad, and by the time he saw the surgeon on Thursday it was worse. She immediately sent us to the hospital to run some tests and make sure nothing had gone wrong. They admitted him again to the Mayo Clinic Hospital, gave him pain meds, took blood, and sent him for a CT.

Good news is everything looked fine on all the tests, but the Vicodin didn’t help his pain much. Then they gave him an IV anti-inflammatory, which helped quite a bit. So they think he is just having some post operative inflammation, and they discharged him yesterday. He’s supposed to go back and see the surgeon again next week and go from there depending on how he’s feeling. His back felt pretty good most of the day yesterday, and he is only taking Ibuprofen now, so maybe they are right about it just being inflammation.

And to make things even better, I also came down with a cold a few days ago, the first one I’ve had since I retired and got away from all those snotty nosed  kids at work.

Then Oreo had an out of litter box accident this week so he got a trip to the vet. He has a slight bladder infection, but also is now in stage 3 renal disease. He had some kidney damage years ago from having 4 surgeries for bladder stones over a 9 year period, so we knew he was bound to have problems. He’s close to 16 years old now, and 13 was our previous record for cat longevity in our house, so he’s doing better than the others. But since he’s our all-time favorite, it makes it hard. 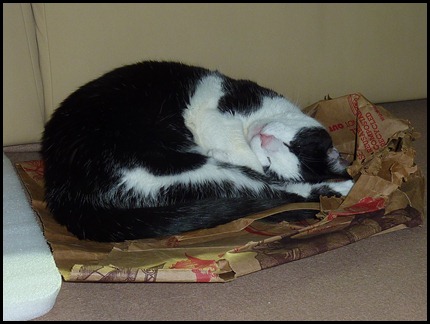 The one good thing about all this is even though there is a two week limit here at McDowell Mtn, normally they let you extend but you have to move to a different site. They told us we can stay in the site we’re in for as long as necessary, and since we have a really nice site, that made us very happy.

I hope I’ll have something more positive to talk about next time I post.