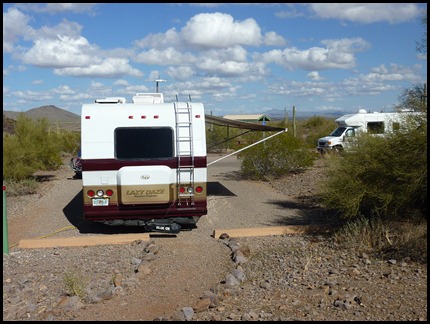 We finally got away from the Phoenix area yesterday. and it felt good to be back on the road. Drove 100 miles south to Picacho Peak State Park, where we spent a few days in 2009. Since then the park was put on the list for closure, but the nearby small town of Eloy gave them funding to keep it open this year. Arizona raised the rates at all of the state parks, and also added electric to all the sites here, so it is $25 a night, more than we like to spend.

We have a nice view of the peak from our site. Here is Oreo, with Picacho Peak above his back. 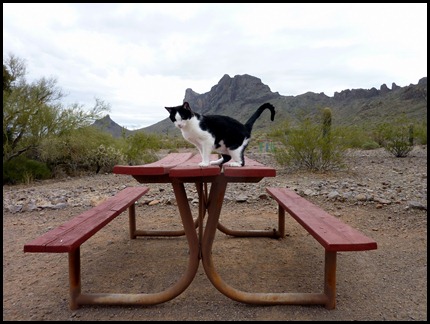 We took a short hike yesterday on the Callaway Trail, which climbs to an overlook. 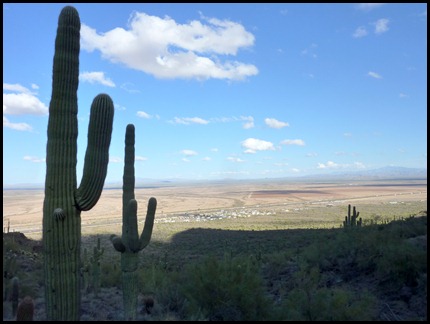 Today we hiked part of the Sunset Vista Trail, which is a 3 mile trail to the peak. When we were here in ‘09, Jim actually made it to the top but I chickened out .You can read about it here. This time he wasn’t even going to attempt the climb, so we turned around after about 2 miles, before the trail got really steep. We came across this gray fox near the trail not far ahead of us. It was so busy smelling and rolling in some dried poop that it let us get fairly close. We thought at first it was a small coyote. 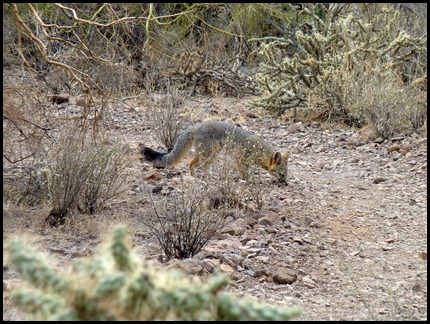 We ran into another couple here with a Lazy Daze whom we met in Tucson two years ago, and also had a nice chat with our next door neighbors, who are on their way back to California driving their new-to-them Class A that they bought in Meridian, MS. They invited us in, and even though it is only 33’, with the slides it looked much bigger. We’re always lusting after something bigger, but it seems like Jim would rather invest our money in health care!

Debbie is in Casa Grande visiting her mother, about 25 miles from here, so tomorrow we are going to meet them for lunch. It’s supposed to rain tomorrow, which will be our first rain since New Years weekend. Then Sunday we’re heading to Tucson.