Things Aren’t Always As They Appear 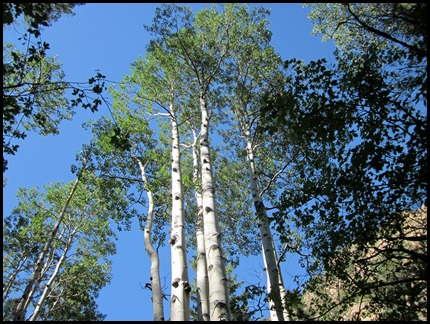 On the way to the trash yesterday morning I got to meet the mystery woman in the old VW Beetle. She asked me if I had room in the freezer for a few of her Blue Ice packs. Sure, I said, bring them over. Well, she has her routine. She wanted to wait until later in the afternoon, then come back and get them 24 hours later. No problem, and that’s what she did.

I asked her if she was just traveling through, and she said no, she was spending the summer at higher elevations to avoid the heat. She winters at a friend’s property just west of Tucson, and finally had to leave by the end of April when temperatures were nearing 100. She plugs an extension cord into her friend’s house to run a lamp and fan, but basically lives in the car. Her friend is now in a nursing home, and she is concerned that her friend will die and the property will be sold.

She told me about going to college, living in Cambridge, MA, then moving to Oregon. She got sick from environmental sensitivities, and was a teacher living in a co-op house. The co-op dissolved and she had to find someplace else to live. She couldn’t find a place with no carpet, drapes, etc, that would be good for her allergies, so she started living in the VW. This was in 1983 and she’s been living in the car ever since!!  She bought the red Beetle new in 1968 after a friend gave her a ride in his and she fell in love with it. She said she doesn’t feel good when she stays in one place too long, and likes traveling around out west in the low humidity. I can relate to that.

She asked me where we were going and I told her Colorado. She wanted to know if we could recommend any forest service campgrounds with water. She buys drinking water, but likes a campground with water, a bathroom, shade, and hiking trails. She doesn’t require much.

I told her we were going into Red River and did she need anything from the store. She said she stocked up at the health food/organic grocery in Taos on her way so she had plenty of food. She was running low on D batteries, but that could wait until she got to a Wal-Mart somewhere.

She seems happy and spends a good part of her day hiking. When she brought over the Blue Ice she said she had taken two hikes already and was going back home for breakfast. This was 3 pm! Probably why she looks so emaciated.

I’m glad we got to meet. She obviously lives this way by choice, and yes she is probably mentally ill, but appears content, and isn’t that all that really matters in life?