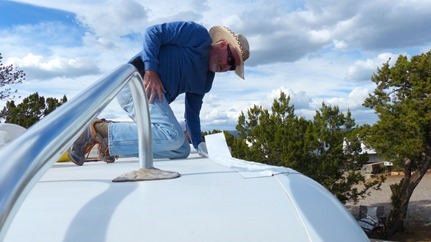 That would be the roof seams on the Lazy Daze, thanks to some help from Debbie. Jim washed the roof the other morning, and of course whenever you try to do one thing, something else needs attention. He discovered the cap over the sewer vent had broken off, so I went to the nearby RV dealer to get a new one while he finished washing. The one we had was metal and had rusted, and since all they had was a plastic one, that’s what I bought. As per Lazy Days usual overkill, the old one was screwed in place with 10 screws and gobs of caulk. Getting the old one off took lots off elbow grease, but he finally removed it and installed the new one.

Later that afternoon he and Debbie got up on the roof to cover the old seam caulk with Eternabond tape. We’ve been carrying it around since we were in Mission, but it was so humid there Jim was afraid it was always too damp to apply it and was waiting for just the perfect time. I had every intention of getting up there to help, but I found out the previous day on a hike that my fear of heights has come back with a vengeance, and there was no way I was climbing all the way up that ladder to the roof. He and Debbie worked well together and got the tape applied without too much trouble, and I was their gopher.  He plans to help her do the same to her rig in a couple days. We are glad to have that project done, as we hope this will last for as long as we own the Lazy Daze.

The previous day we took a drive to Saddlerock Canyon Rd, just west of Silver City. This is a lovely area with interesting and colorful rock formations. 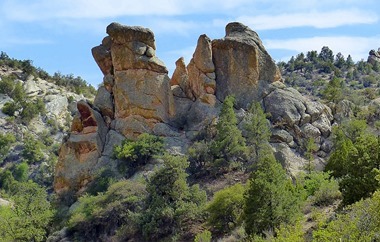 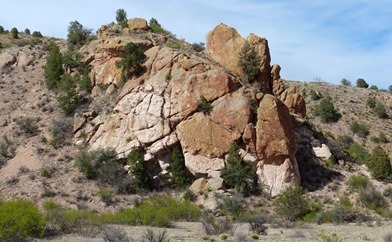 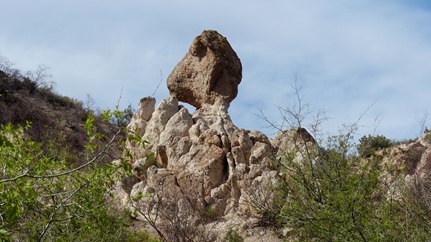 There are no formal hiking trails, but there are plenty of dirt roads, and you can walk through the canyon washes. The place we picked involved lots of rock scrambling, which we haven’t done in a long time. I had a hard time getting back down some of the places we climbed, and had a couple panic attacks due to my fear of heights, and fear of bees and wasps, which were gathered by a tree we had to pass. Jim finally went on without me until he found a spot even he wasn’t comfortable going up. 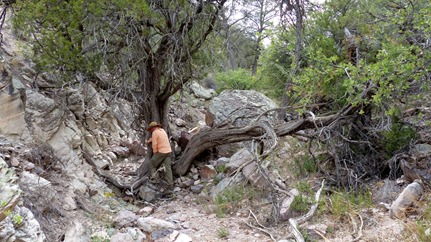 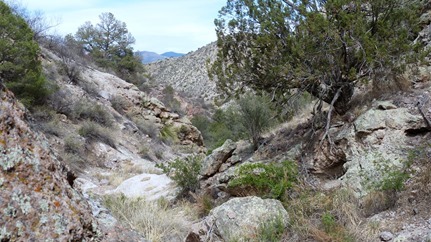 Where I lost my nerve. 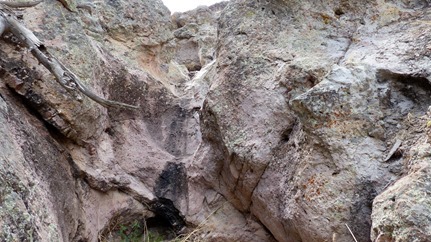 We found several large, level boondocking spots which would be doable. but  we had no cell signal at all. 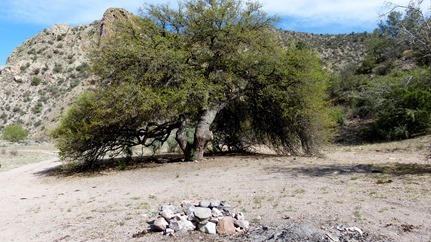 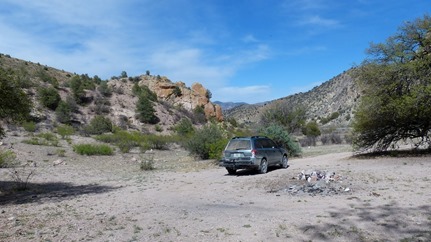 It’s a lovely area, and we will probably go back and explore it again before we leave Silver City.