Our next stop was in Eureka, CA at the Redwood Acres RV Park in the fairgrounds. It’s a Passport America park, but in order to get the half price rate of $17.50 you have to spend two nights. It isn’t the greatest place, but it turned out to be convenient to town and the hospital, which came in handy later on. 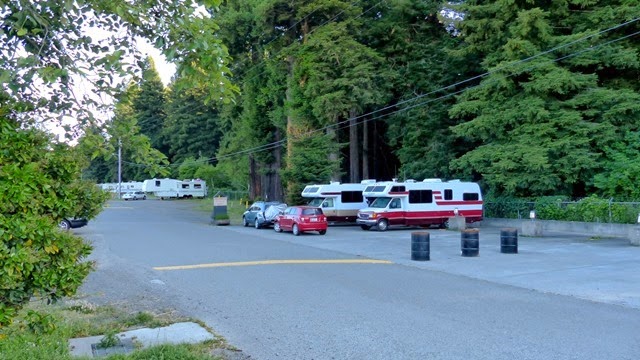 While there we checked out Eureka’s old town and waterfront. It was a bit disappointing. Not many people around except for a large number of homeless. We just didn’t get a good feel for the area, but we did have a good meal and beer at Lost Coast Brewery. 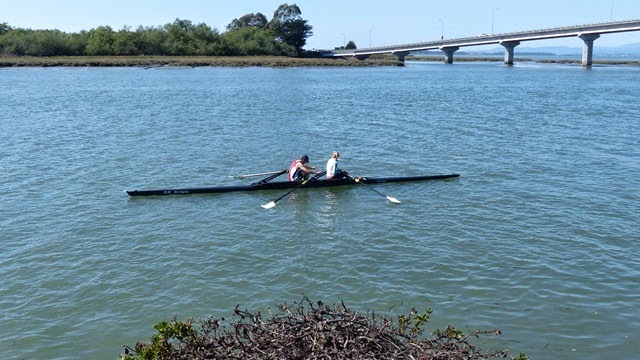 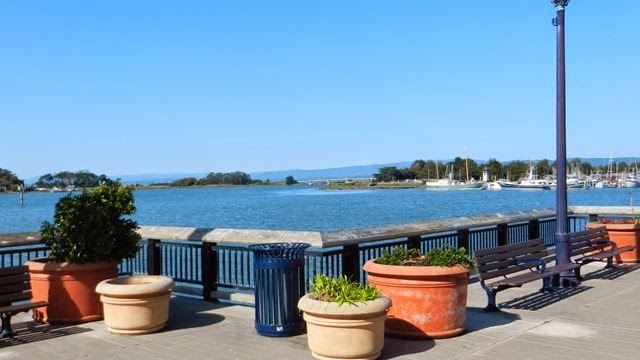 Old Town contains over 150 Victoria-era buildings. This is the Carson Mansion,  built in 1884 by lumber baron William Carson. 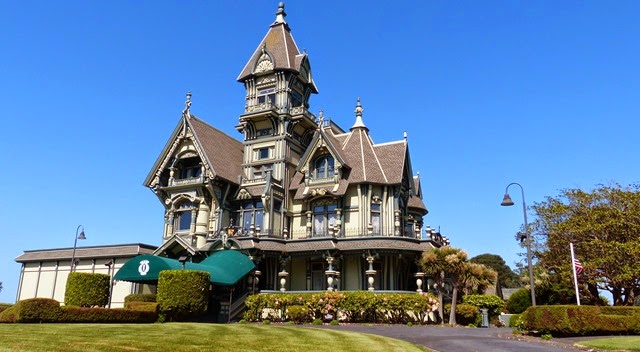 It is now a private club. I have a feeling we wouldn’t get an invitation to join. 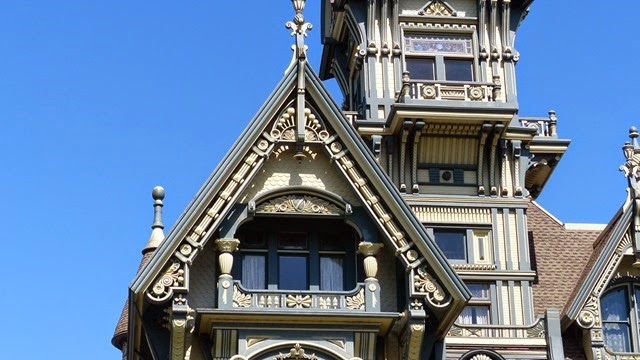 The Pink Lady mansion across the street, built by the Carsons in 1889 as a wedding present for their son. Nice parents! 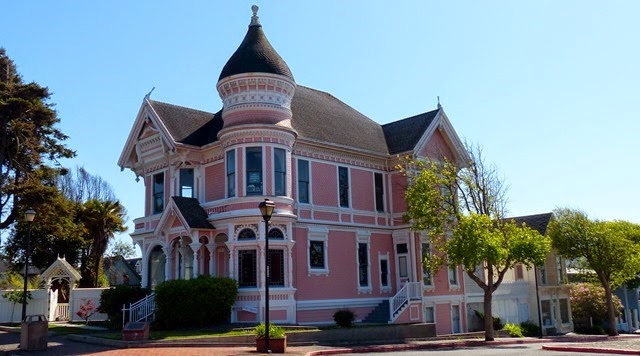 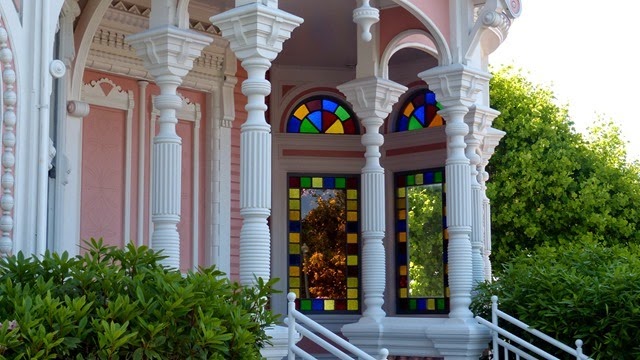 We liked this lawnmower/bicycle outside a shop in Old Town. 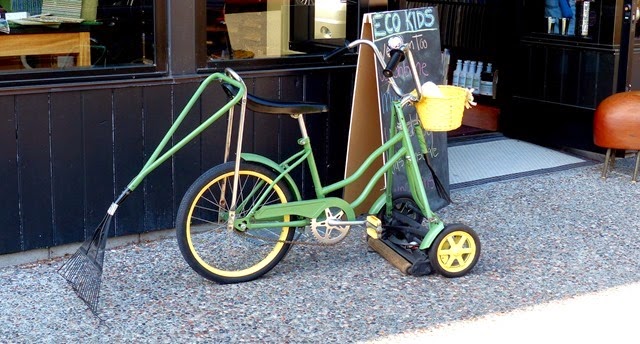 The next day we took our bikes to Arcata, the next town north on 101, to the Hammond Trail. The trail follows the coast and is mostly paved, although there were some gravel sections. 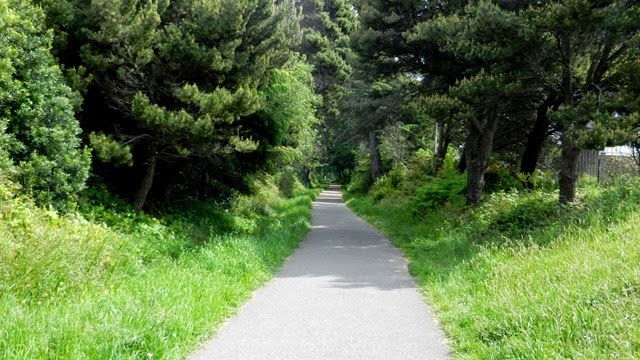 Views of the coast from the trail. 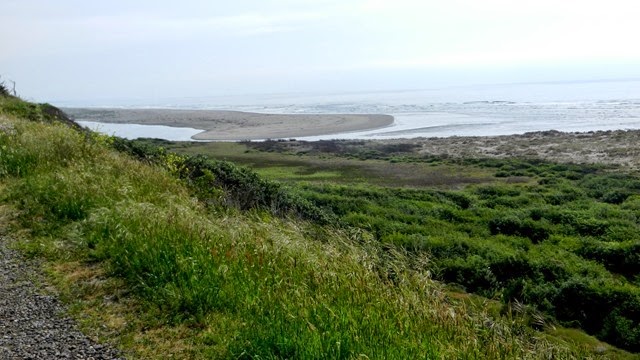 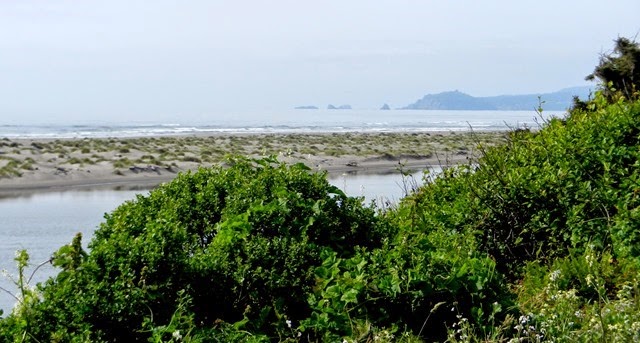 Since we weren’t too far away, after our bike ride we drove along the coast to Samoa Boat Ramp to say hi to Brian and Leigh, who were camped there all week. Just past the county park is the BLM Samoa Dunes Recreation Area, on a spit of land between the bay and the Pacific and home to a huge Coast Guard station. 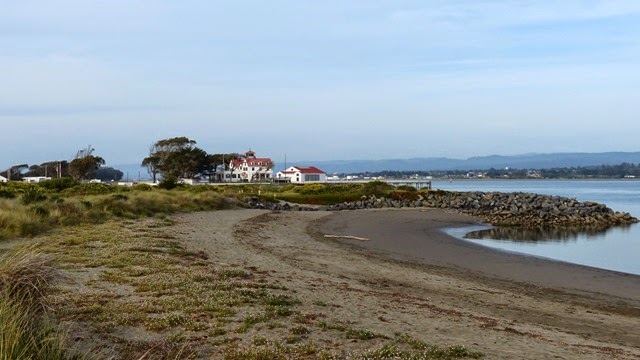 Jim was having some sharp pain under his ribs and shoulder when he breathed in deeply, and by that evening was running a fever. He got ready for bed and couldn’t get comfortable lying down. Of course I Googled his symptoms, which could be signs of a pulmonary embolism. He insisted it was just a pulled muscle, although didn’t remember doing any particular activity which may have caused it. Luckily St. Joseph’s Hospital was just a mile from the fairgrounds, and I finally convinced him to let me take him to the ER. By this time it was 10:30pm. Just us and a few homeless people there at that time, so they were very prompt at getting him in.

Because his d-dimer blood test result was positive, an indication that the body is trying to dissolve a clot, they wanted to do a CT scan. Jim had an allergic reaction to contrast dye years ago when he had a kidney stone, so instead they did a pulmonary ventilation/perfusion scan. This test showed no evidence of a pulmonary embolism, but did show that he had atelectasis of his left lung, which can be caused by not breathing deeply, which he had been doing for about 24 hours due to the pain. There was no evidence of a clot in his lung, and the elevated d-dimer was most likely due to the fact that he has varicose veins in his legs.

So after almost 7 hours in the ER, and no telling how many thousands of dollars, he was diagnosed with a pulled or strained muscle and sent home with Valium, as a muscle relaxant. I won’t hear the end of “I told you so”, but the fever had me worried. The ER doc said it is not uncommon to develop a low grade fever with atelectasis.

So we came home and went to bed at 5:30am yesterday. I only slept a few hours, but the drugs kept Jim asleep longer. We didn’t want to pay $35 to spend another night at the fairgrounds, so we finally hitched up and I drove us north on 101 to Trinidad and the Cher-Ae Heights Casino.

Not a big RV lot but in a quiet location well off the road in a scenic location and we can see a bit of the ocean through the trees. We signed up for their player’s club and got $10 in free slot play. While Jim was asleep Debbie and I went in to try our luck. She came out with $40 and I came out with $30. Not bad for a free campsite! And we got a card for another $10 in play for today. We would eat a meal at one of their restaurants to help support them but non-meat or seafood options are almost non-existent. I guess not many vegans are into gambling. 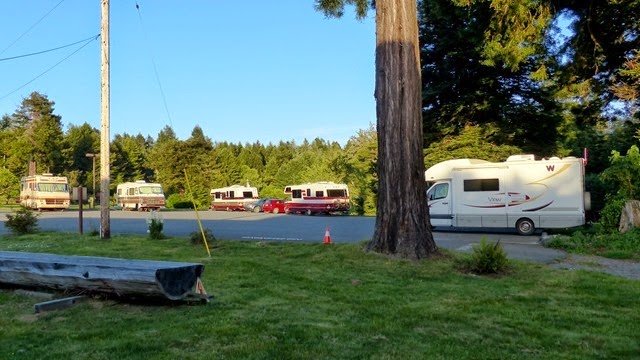 A few days ago we got a comment from blog reader Suzanne, who has her own very nice blog Take To The Highway. She was heading to the coast yesterday and saw that we were nearby and wondered where our next stop would be. Coincidentally she was also planning to stay at Cher-Ae Heights Casino last night, so she stopped by to visit. In fact that is her RV on the right in the above photo. And this is the view from behind her site. 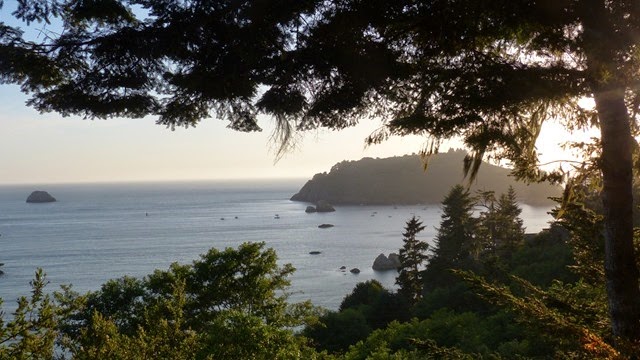 We had a nice evening of conversation and hope our paths cross again soon. She even gave us her Oregon Benchmark Atlas, which she decided she wasn’t going to use. Thanks, Suzanne, we really enjoyed meeting you!

I could do another entire post about Jim on Valium but I won’t go into any of the gory details. Brian happened to stop by the casino on work related business (at least that’s what he told us) shortly after we pulled in, and he got to witness Jim’s crazy behavior. And Jim has no idea he is behaving oddly. Pretty funny! His pain is much better and he can breath more deeply, so it appears to be working its magic. We are slowing moving towards Bend, OR where I have an appointment with a urologist on June 2. If all is well we hope to be able to stay away from hospitals and doctors for a long time to come.