On Tuesday another 100+ miles detouring around Teton Pass took us on a gorgeous route along the Snake River with fall colors at their finest. This is a perfect time to visit Grand Teton National Park, especially this year with unusually warm temperatures. It is still a crowded and popular place, but with kids back in school and mostly quiet mature folks (like us) around it is quite pleasant.

I just can’t  express how happy we are to be back in the land of wide open skies. 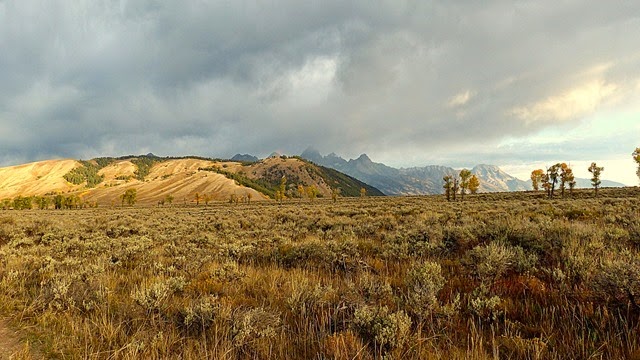 We really liked Gros Ventre Campground when we visited the Tetons in 2010 and decided to stay here again, although we had a very kind invitation from Brian and Leigh to join them at their dispersed site up the road.

We had packages and mail coming to Jackson and didn’t want to be that far away from town so here we are. With the senior pass it is $11.50/night. Water, dump, flush toilets and trash dumpsters. Nice to have those amenities nearby but the bonus is having wildlife wander through the campground coming and going from the Gros Ventre River, just a short walk behind the campground. 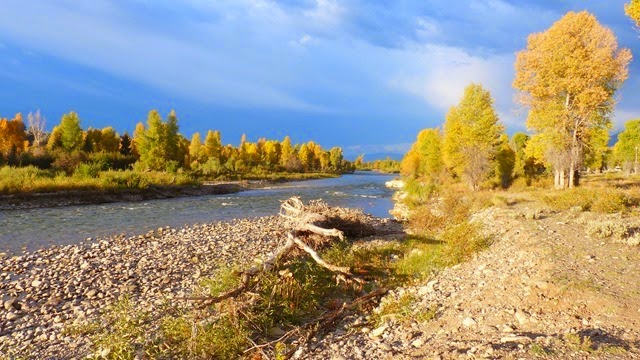 This handsome fellow walked right behind our site this morning and I had a close encounter with his sons yesterday. 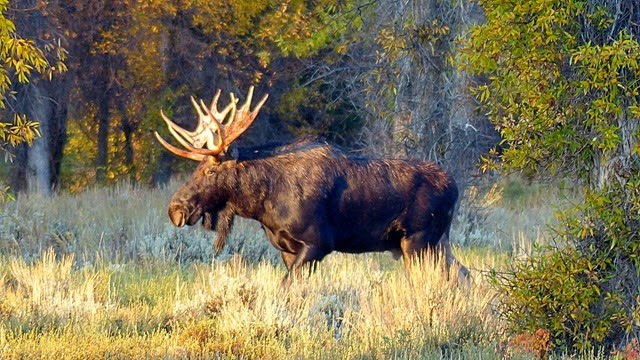 Another reason we wanted to stay here is that it just so happened our Fort Bragg, CA friends Tom and Nancy were heading to Iowa and decided to come through the Tetons, coincidentally at the same time we were getting here. They arrived a few hours after we did and got a site nearby.

It was great to see them again, and since they could only spend two nights we decided to take them on one of the classic hikes in the park at Jenny Lake, to Hidden Falls. 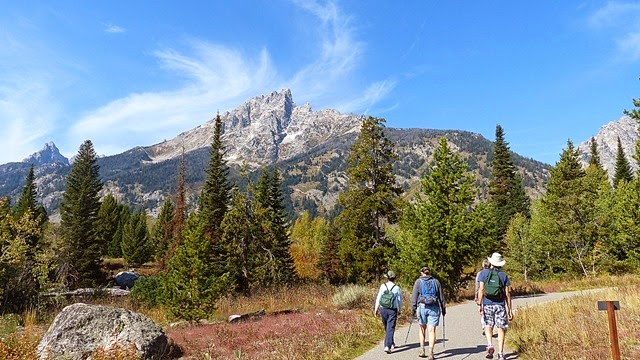 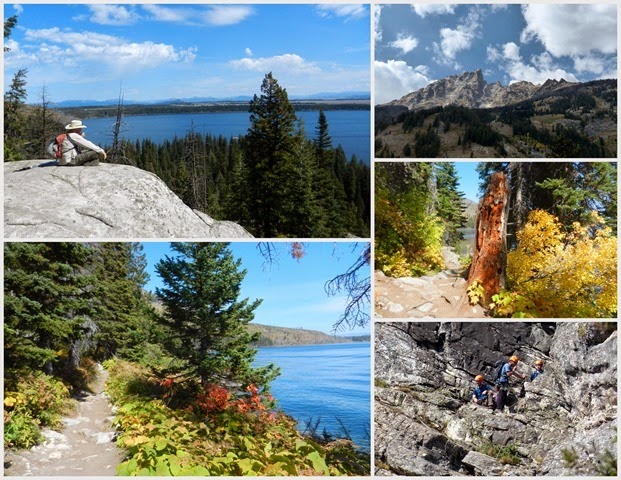 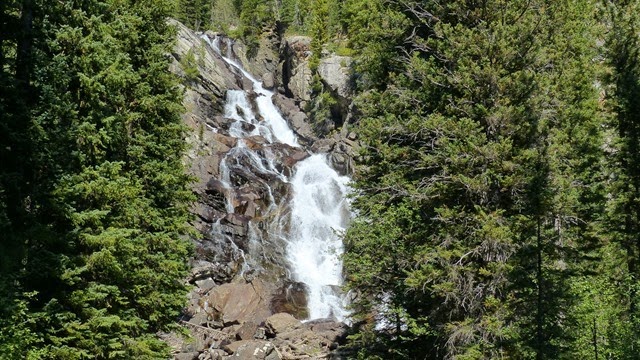 After the falls we wanted to make the loop hike all the way around Jenny Lake, but they were working on the trail and had the bridge closed, so we ended up taking the horse trail back, which took us higher and gave us even better views. 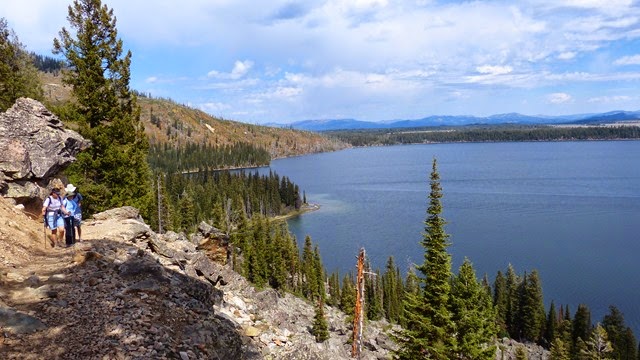 After intersecting the main trail some other hikers told us about a moose and her baby off the Moose Ponds trail, so we went down to take a look.

Only saw this youngster in the pond although we kept a close watch out for mama in case she didn’t like us being so close to her little one. 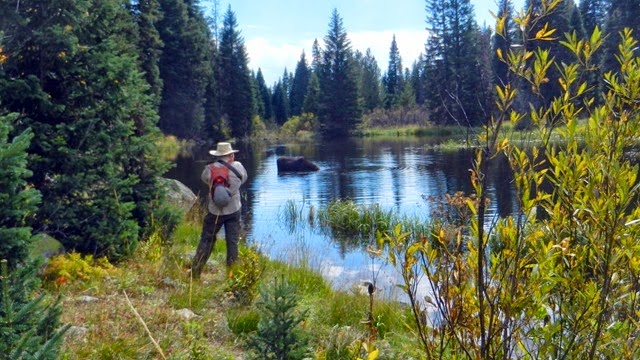 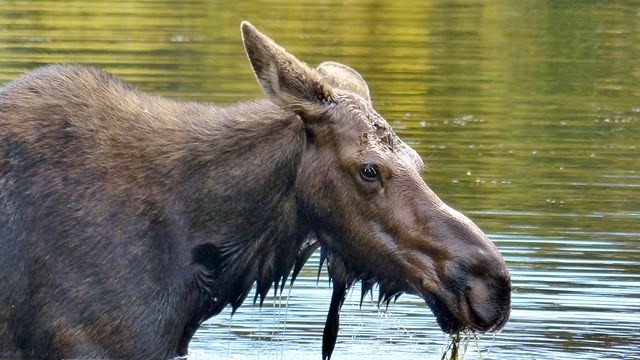 Then yesterday after I got up I went for my usual early morning walk and just around the other side of our loop spotted a bunch of people standing around watching the antics of these two. 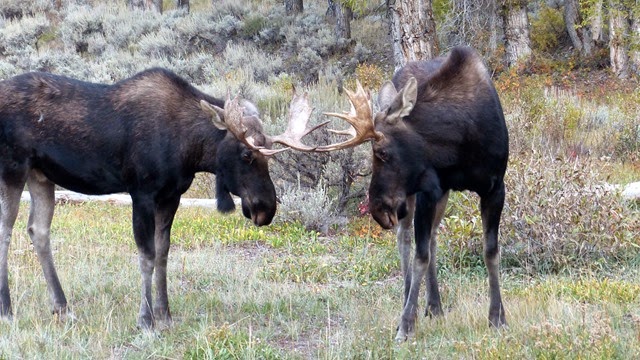 They were fascinated by this satellite dome, and yes, you know where this is heading. Apparently the owner was still in bed, but the rest of us watched the drama unfold and did not try to stop it. 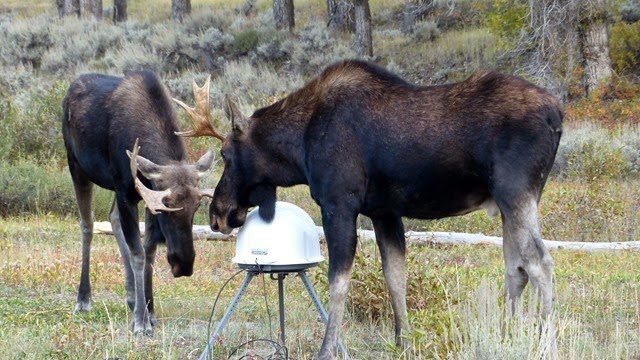 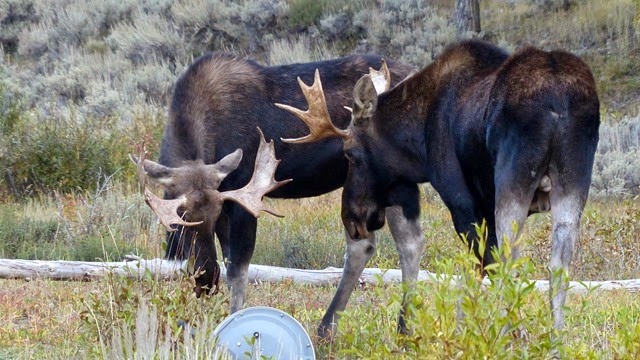 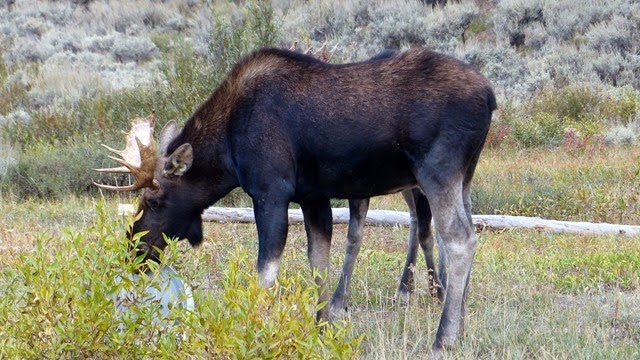 Finally the owner came out and started yelling at them to get away. The spectators, including myself, hurried away also. An interesting study in human nature, don’t you think? 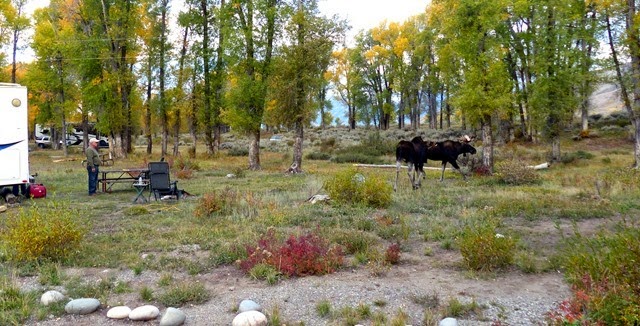