This is what I saw when I opened the blinds this morning.

Jim had a nice visit with Dr. Moats at Mayo Family Medicine on Friday. After looking at the ER report, I think she was surprised that he was actually alive and well, not having leg pain and having no problems breathing. We read that in nearly 25% of patients with pulmonary embolism the initial clinical manifestation is sudden death. Fortunately for Jim he was in the other 75%. She said most people with his diagnosis would still be lying in bed with their leg elevated due to pain and having shortness of breath. Just goes to show the benefit of regular exercise all these years.

Unfortunately now he must take blood thinners, probably for the rest of his life, which of course have their own risks. Dr. Moats advised him to not do any really strenuous exercise for another couple weeks, as they think the risk of the DVT in his leg throwing off another clot to the lungs is greatest in the first month. So he will keep walking, which she said was fine. He asked about mountain biking, and of course she said it was up to him to weigh the risk of bleeding from a fall off the bike. Of course he could fall off the step walking out of the Lazy Daze and would not be wearing a helmet, so everything we do has some risk involved.

She ordered some basic blood work but the hematologist will do more specific testing next month. She also referred him to a cardiovascular specialist who has an interest in coagulation disorders. The first appointment he could get wasn’t until January 30, so we will be hanging close to this area over the winter.

On the way home we stopped at Office Max, Best Buy, and Target. For being Black Friday we were surprised that there was little traffic and very few people in those stores.

Sherry wondered what we ate for Thanksgiving dinner so here goes in case anyone else is interested.  I made Portabella Pomodoro, Brocolli-Walnut Stir-Fry (I left out the oil and used olive oil spray), and baked a loaf of whole wheat bread in my little bread machine.

For desert we had Crustless Pumpkin Pie. I used EnerG Egg Replacer, almond milk, and just 1/4 cup of half sugar and half stevia. I’ve made this recipe many times before and it turned out fine, but for some reason it didn’t really thicken this time so it was more like eating pumpkin pudding, but it tasted great. And there was enough of everything left over for dinner the next day.

Yesterday Jim installed a new fan in the refrigerator. He wired it into the light, and it attaches to the fins and blows back onto them. From what a couple people on the Lazy Daze forum have said it keeps ice from forming on the fins, so we’ll see what our experience is after it’s been in there awhile. 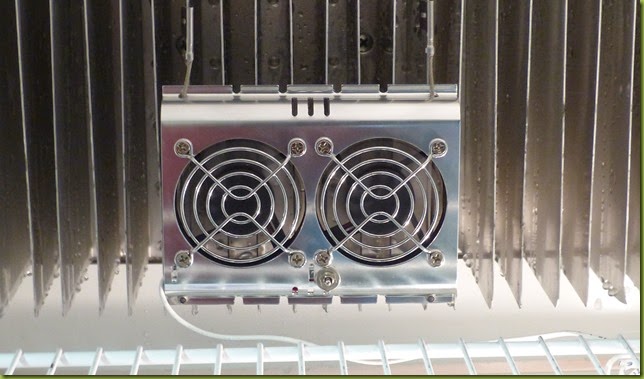 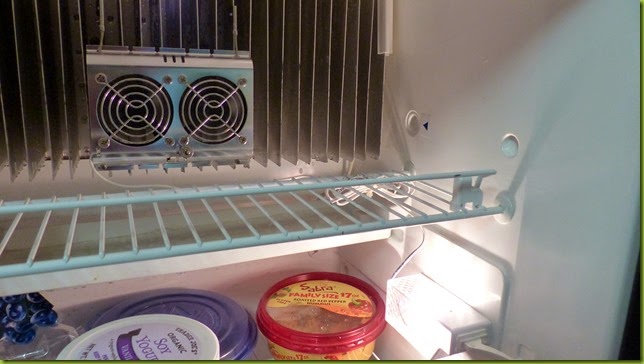