A Ouray Kind of 4th

We are not big on celebrating holidays, especially events where crowds of people are involved, But we wanted to visit our friends Mark and Bobbie (Box Canyon Blog) in Lovely Ouray, and watching the water fights downtown sounded like something fun and unusual. Plus it got us out of attending the BBQ and country music performance at the RV park!

We made the 70 mile drive, stopped for lunch in Ridgway, and arrived at their house around 1. After Jim and Mark, aka “the blood clot brothers” had a riveting conversation about their health, we walked downtown to pick up Bobbie from work at the gift shop at 2, when the water fights were scheduled to begin. Then we pushed our way into the throngs of people waiting for the big event. 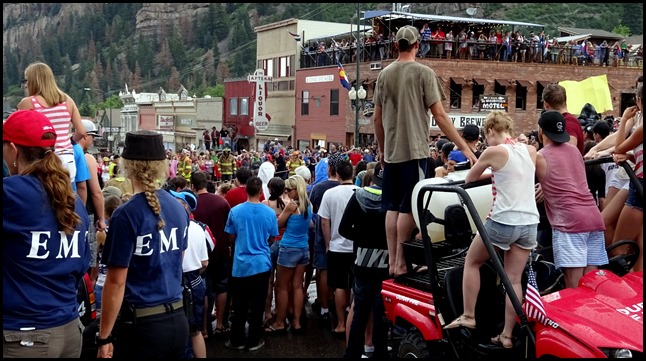 A few of them even looked familiar. 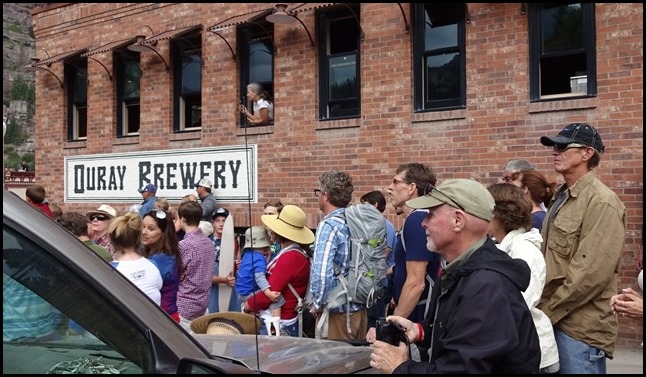 The water fights are a 4th of July tradition dating back to the mining days of the late 1800s where teams of two wearing protective gear battle it out with fire hoses. As a spectator you can expect to get wet, depending of course on how close you dare to stand. 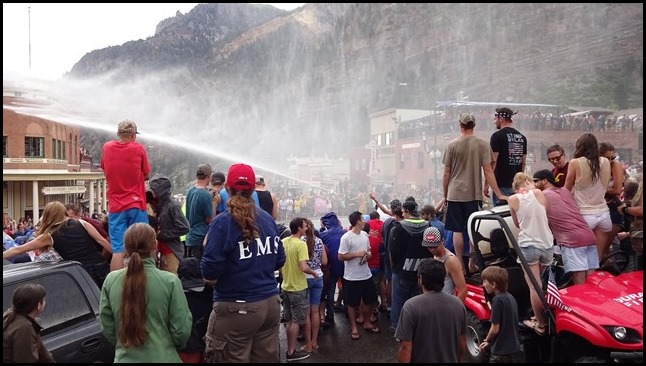 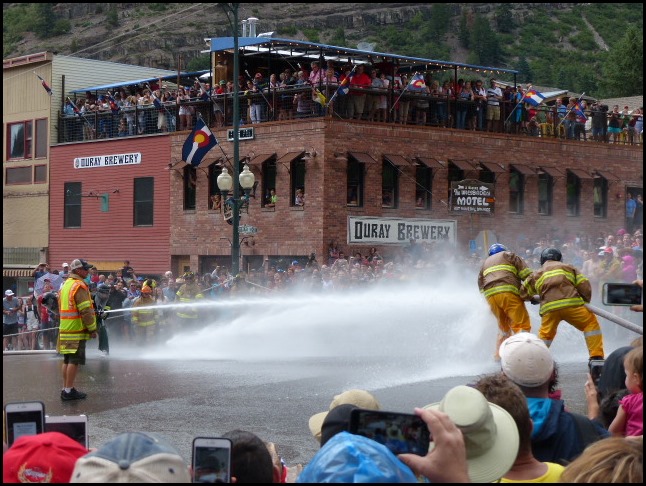 These guys, the winners, were rock solid. Mark said they try to aim for the head so the spray will get under the face guards and fill with water, a sure way to give up the fight before drowning. 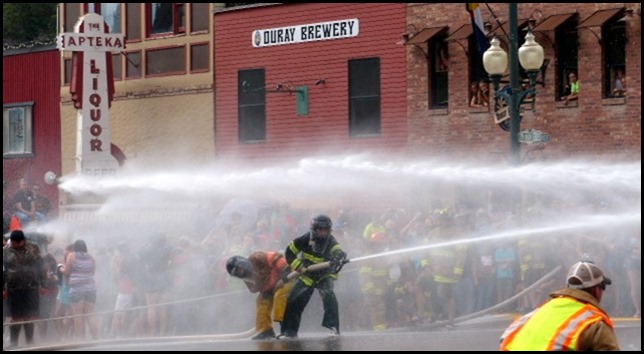 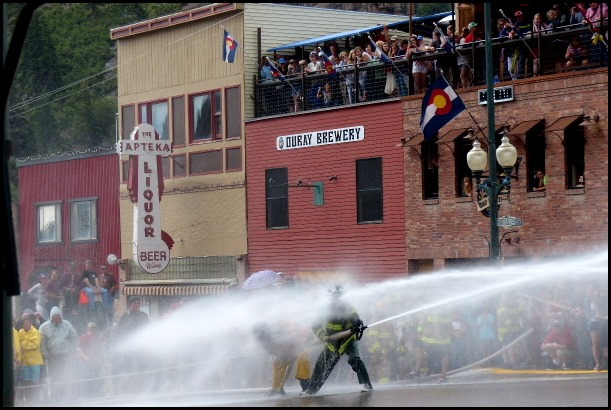 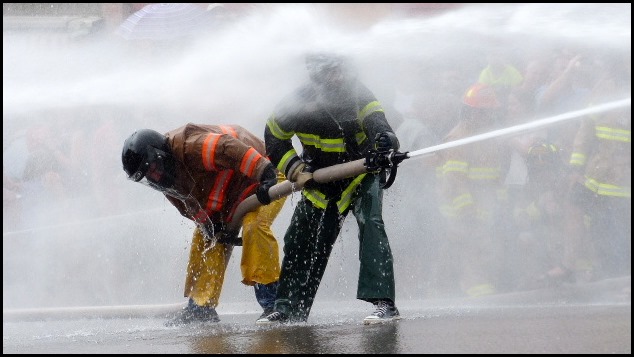 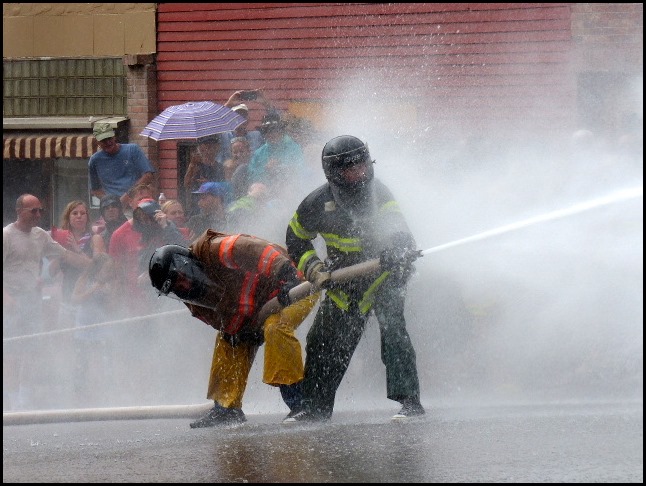 The losing team was just all over the place, and withstood a lot of head shots before finally calling it quits. I was thinking this does not look like fun! 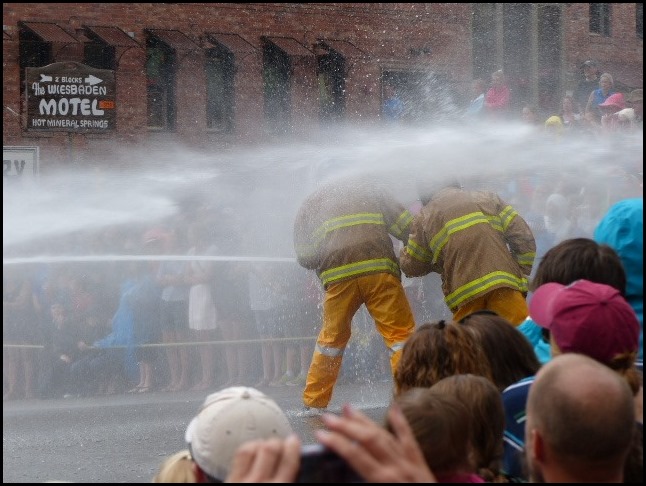 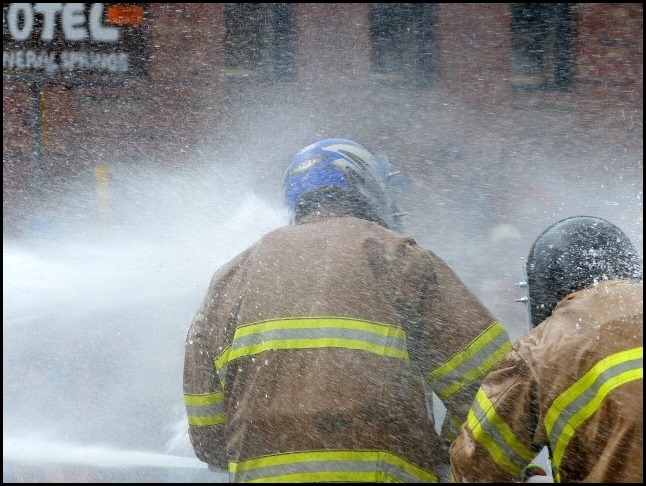 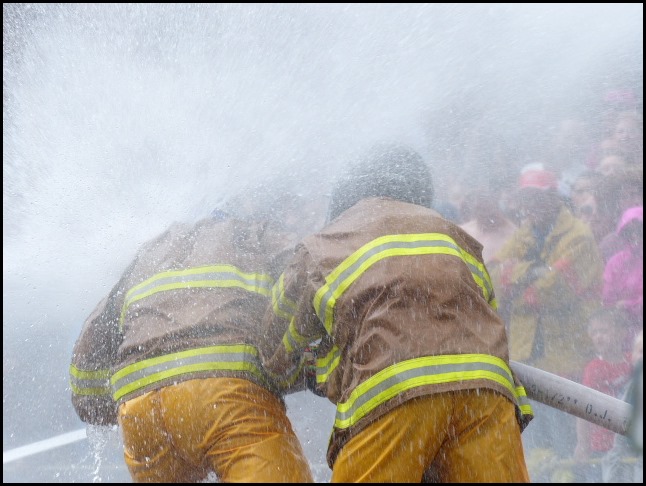 After walking around town for awhile we went back to Mark and Bobbie’s place for a beer and had planned to order a pizza for dinner. Hard to believe but the pizza places were closed, and the other restaurants were so busy they would not do take out orders. No way were we braving the crowds again to go wait for a table at a restaurant, so Mark whipped out a pan, whole wheat tortillas, and a can of pinto beans and put together some bean burritos. Bobbie and I cut up tomatoes, onions and avocado, while Jim supervised as he sipped on a Samuel Smith’s Organic Chocolate Stout. Then it was a tour of some possible boondocking sites for when we return for a longer visit in a couple weeks. We managed to stay up until the fireworks at 9:30, alternating between watching them on the cool, breezy balcony and out the master bedroom windows. 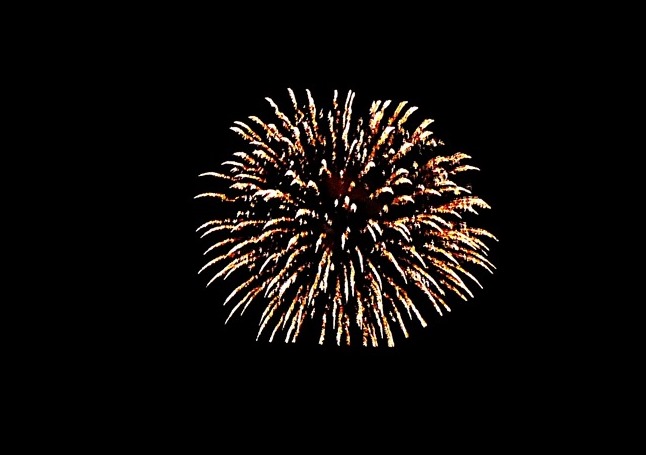 Yes, our gracious hosts invited us to spend the night in their luxurious guest room, nervously leaving the cats home alone. Our neighbors had a key barring any strange noises or flames coming out our roof, but all was well and they behaved.

View from Mark and Bobbie’s IMAX window. We can’t believe they are trying to sell this place. 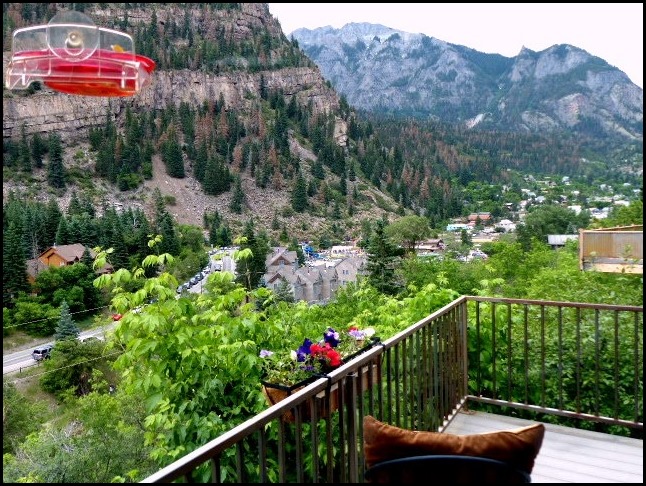 It was a very pleasant night out, and the first time since October 2008 that I did not sleep in the Lazy Daze. Jim unfortunately has spent a few nights away in the hospital over these years. Yesterday morning we took an hour long walk before heading back to Cedaredge. Neither of us brought a camera but we’ll be back to Ouray later this month when I’m sure there will be no shortage of photos.