Last week we took the bikes up on Grand Mesa where we rode the 14 mile Flowing Park loop trail. We had hiked 4 miles of the trail the previous week and thought it would make a great place for a ride. 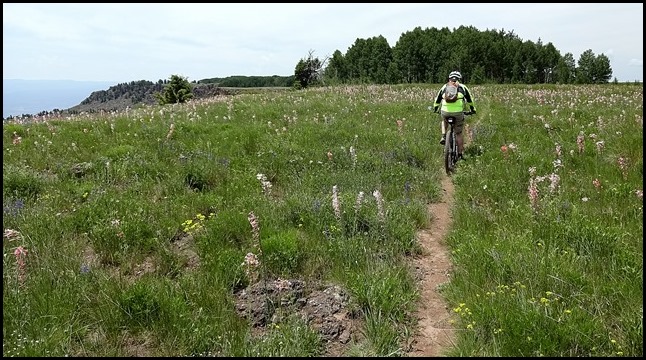 And it was, for maybe half of the trail. The rest is riding over lava rocks along the rim of the mesa, a bumpy ride for sure and too risky for an old guy on blood thinners who has a habit of falling off his bike. So this translated into us walking the bikes for many more miles than we care to remember. And due to the very narrow single track, walking was almost harder than riding. 14 miles doesn’t sound like a lot on a bike, but at that elevation it pushed us to our limits.

On the positive side there are the views and the wildflowers. And very little elevation change, which unfortunately means no coasting. 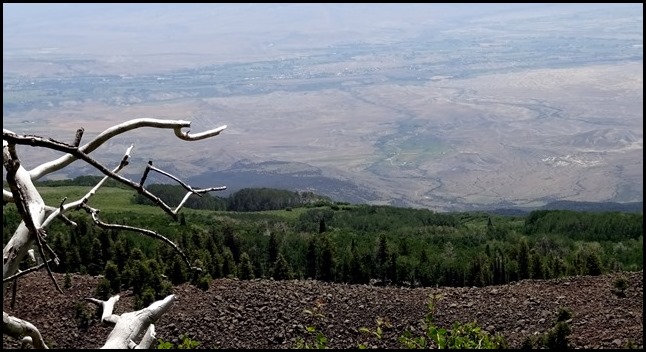 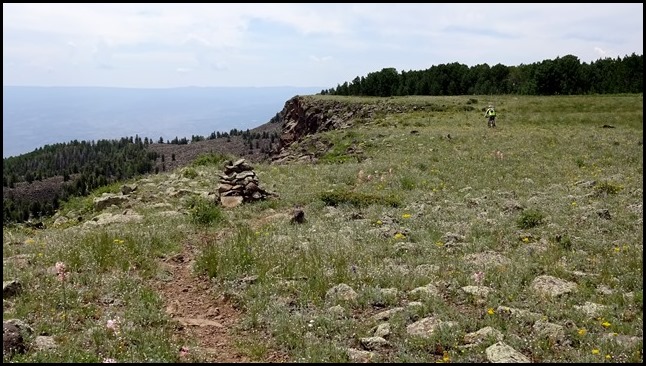 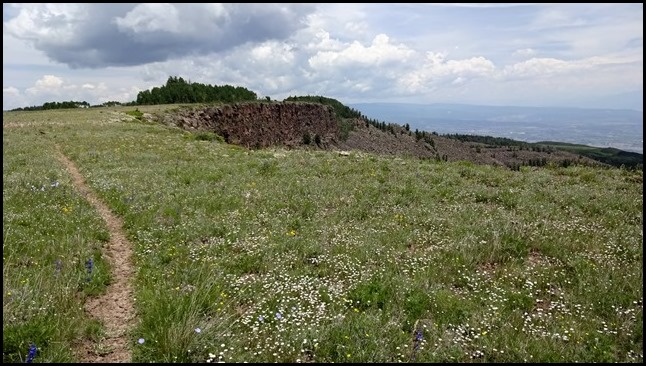 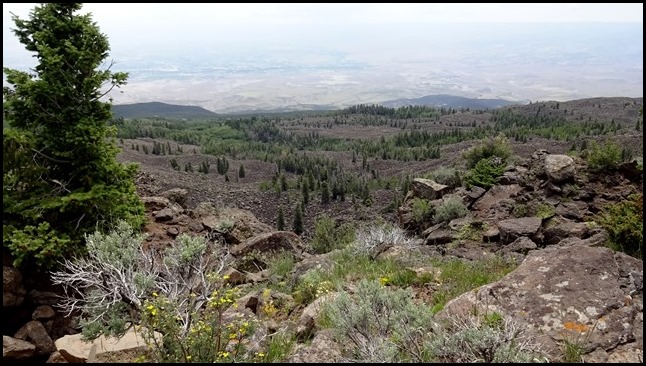 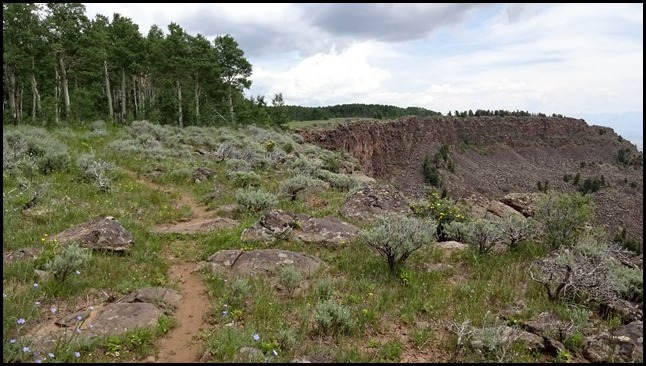 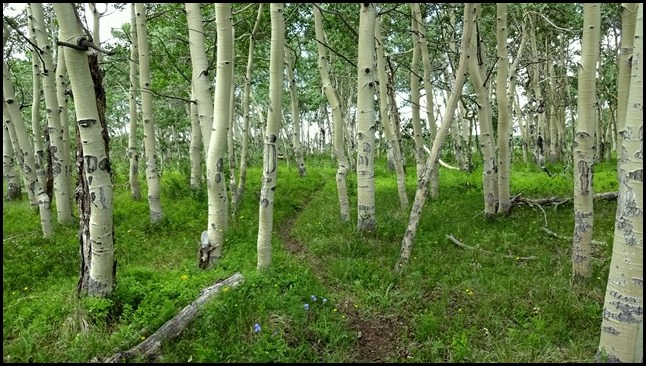 We stopped a lot, but this was a short detour off the main trail that goes to Indian Point. 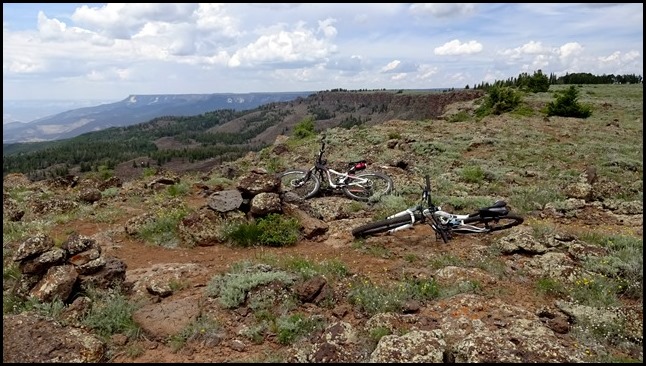 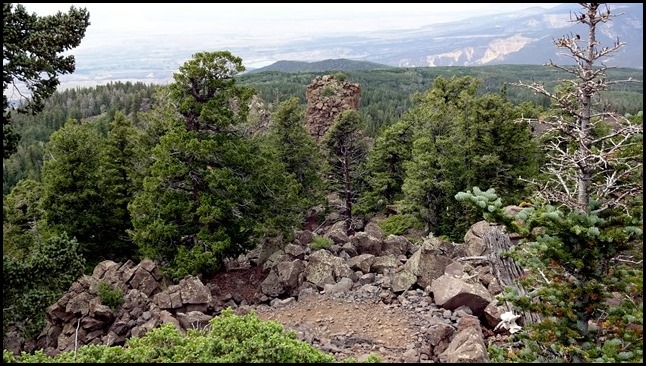 We shared the entire trail with one other biker and quite a few cattle. 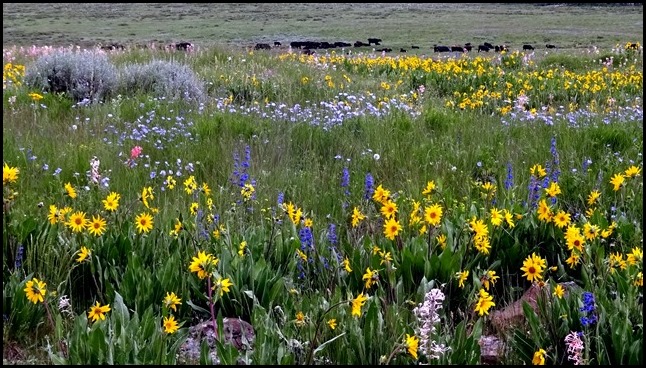 We rode the loop clockwise based on the advice of the riders we met on the trail the day we hiked. I think this was the right decision if you do the entire loop, but if you want an easier out and back we suggest turning right at the start of the loop and going towards Indian Point. It is less rocky for the first few miles going this way and it’s a gentle climb, so coming back is a nice little downhill. It saved us from bonking as we were wiped out from the rocks and pushing the bikes by this point.

When we got back to the car this van with British Columbia plates and a bike rack was still parked at the trail head. 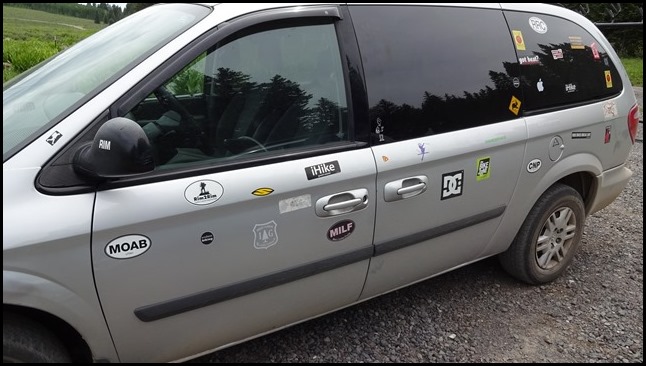 We couldn’t figure out how we missed seeing the riders, then spotted a woman standing by the van who asked us if we had found a car key on the trail. Her friend put it in her pack but it wasn’t there when they returned from the ride. A kind couple took her two friends to try and find cell reception to call a locksmith, while she stayed behind hoping maybe someone found the key. She also had no food (they left it back at their cabin) but we had eaten the only bars we brought. Luckily the other rider we met on the trail had a couple extra so he gave them to her. She still had plenty of water.

The other biker was a nice guy from Provo, UT who had driven 4.5 hours to Grand Mesa just to ride this trail. His car was at the Mesa Top trail head off Hwy 65, another rocky, uphill 7 mile trail from where we parked. He was dreading having to ride it back so Jim offered to give him a ride to his car, and he accepted. But since we can only carry two bikes, Jim put theirs on the rack and drove him to the parking lot. I stayed and chatted with the waiting woman for awhile then rode my bike a couple miles on the dirt road to intercept Jim on his way back. Jim ran into the couple who helped the van women and said they left them at the visitor center, where they were waiting on a locksmith from Delta (40 miles away) to arrive. We wonder how long it took for someone to come. The moral of this story is always have a spare car key, and bring extra food. You just never know.

It was a long day, and this is how we felt when we got home late that afternoon. 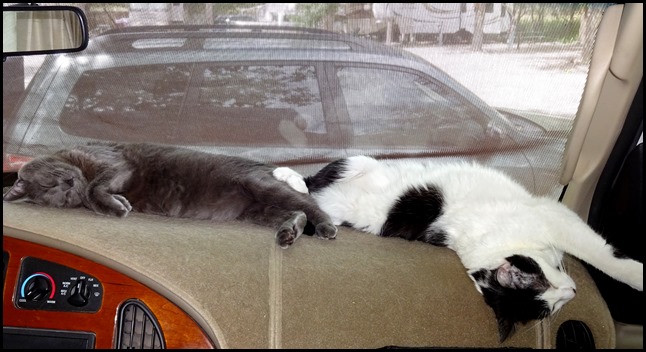