After we got done working yesterday, we tackled the adjustment screw on the water pump. Jim had to undo the screws holding the pump in place, and managed to get to the adjustment screw. Only a quarter turn clockwise and  now the water pressure is great with no varying pressure like we were having. Only problem was that one of the fittings started leaking after we messed with the pump. After many attempts to tighten it, we still had some minor dripping. Found a water leak detector at True Value in Washouga, WA, a  20+ mile drive. Now we have a small bowl under the fitting and the leak detector under the bed. It does appear as of this afternoon that everything is dry, and the pump is now working properly. Maybe the problem is resolved!

Wanted to ride bikes today but it was extremely windy, so we went back to Beacon Rock State Park and hiked up the Hamilton Mountain Trail about a mile and a half to Rodney Falls and the Pool of Winds. It was the typical Columbia Gorge trail, uphill all the way to the falls, very green and lush, with some nice views of Bonneville Dam and the river. How surprising to find such an interesting pool and waterfalls, unlike any we’ve seen around here. This is the lower part of the trail which continues on another 2.6 miles to the summit of Hamilton Mt. 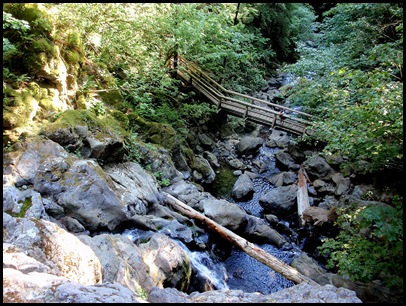 We were up on the trail which dead ends at the Pool of Winds, which wasn’t even visible until we climbed up on some rocks and leaned over a railing. 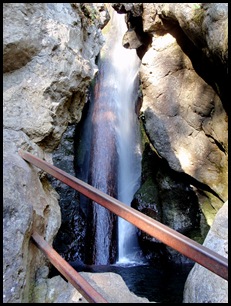 From there you had a great view of the falls and pool. What was so unusual is there is a tree which fell into the water and is leaning against the side of the rocks under the falls. It almost looked like it was growing out of the rocks at the top. As with most of our pictures, you had to be there to really appreciate it. 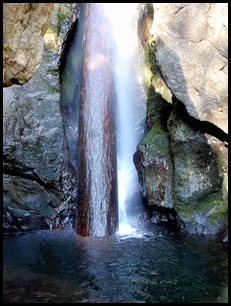 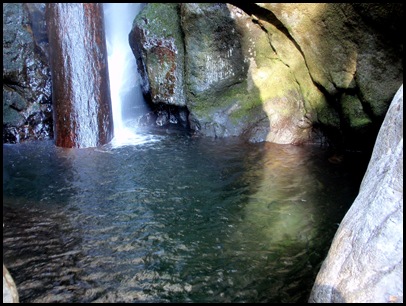 Checked under the bed when we got back tonight and we are nice and dry, so tomorrow we’re taking a drive to Mt. Hood and taking a day off from RV maintenance. (we hope!)