We braved the bad publicity and drove 68 miles into Mexico to Puerto Penasco (or Rocky Point). We heard it was a popular spot for Americans and Canadians to spend the winter, and we were curious to see why.

Crossing the border into Mexico is no big deal, they just asked us if we had more than $1000 in cash. Guess they are checking to see if we were going to buy cocaine or something. The worst part of the drive was going through Sonoyta, a few miles south of the border. The stop signs were hard to see and not always pointed in the right direction, and we appeared to be the only ones obeying them.  We saw lots of stray dogs, as we have in every little Mexican town we’ve visited. Also there were frequent speed limit signs for 20 kph at pedestrian and school crossings, which is a very slow 12.4 mph. Again, we were the only ones going that slow, and then there would be no signs telling you to resume the normal speed, which we weren’t sure of anyway.  Jim just knew he didn’t want to get a ticket and get thrown in a Mexican jail, so we got passed much of the way to Puerto Penasco. On the positive side, the road was good and traffic was very light.

We found our way to the Old Town area, which was on the waterfront and not too bad looking. 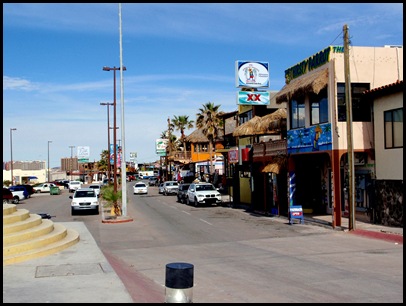 One of the restaurants with quite a view. 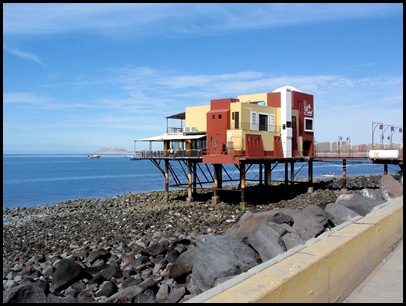 They also have a nice plaza with an amphitheater right on the Sea of Cortez. There were very few people around, and most appeared to be Americans. 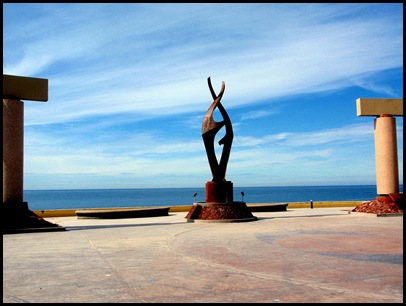 We walked around and looked at some of the shops, which were the typical Mexican touristy t-shirt and jewelry shops, and were accosted by the vendors. They all spoke excellent  English and had a good sense of humor when we said we weren’t interested in their wares. Then we ate lunch at Sr. Amigo, where we had veggie fajitas.  I enjoyed them, but the veggies were a bit too crunchy for Jim. Debbie had some huge shrimp which she said were delicious.

After lunch we drove down the road to the beaches. There were the typical high-rise condos and beach resorts, except that many of them were abandoned in mid-construction, a result of the economic crisis, I suppose. This is a photo from the Old Town waterfront. You can see the condos and RV parks on the beach behind the shrimp boats. 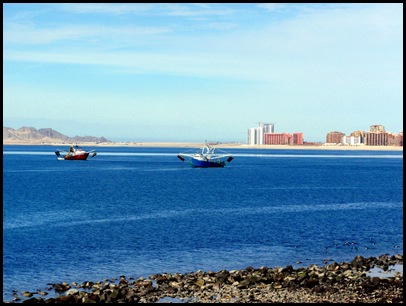 This is what we found the RV parks to look like. Playa Bonita is one of the larger ones, on the grounds of a big resort. It was not completely full, but enough so that we knew it wasn’t our kind of place. There is a long row of beachfront sites, but it was so tightly packed we couldn’t figure out how some of these huge motor homes could come or go. And the other sites had no view except of their neighbors. We found it to be pretty depressing. 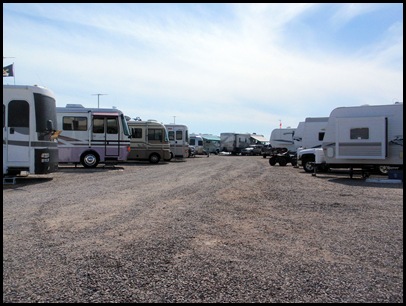 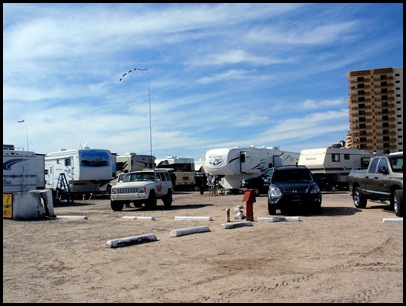 We made it home safely and are glad we went, but this is one place we have no desire to return to. In fact, I doubt I will ever get Jim to go back into Mexico again,  unless he uses some of that cocaine we bought before we go!