Thursday morning Debbie and I joined the Ride with a Ranger shuttle bus tour of Zion Canyon. It is a two hour ride with five stops along the way. The ranger was a very nice young woman who talked about the geology and rock formations in the park, and various other topics. She showed us some good photos of rock slides in the park over the years. Amazingly no one has ever been injured by one. It was pretty cold and windy when we got out of the bus, but it was sunny and we got to see lots of deer and a couple wild turkeys. She also took us to a hidden waterfall, Menu Falls (so named because this falls has been pictured on many restaurant menus), that is not far from the road but easy to miss. It was a nice way to spend the morning. I only took a few pictures since we have taken hundreds here already. 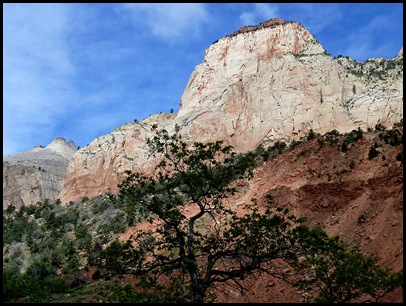 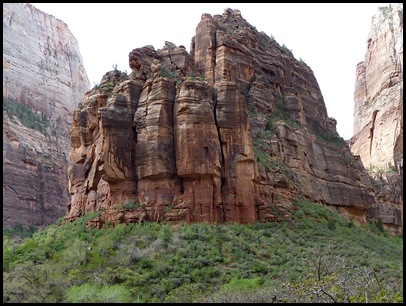 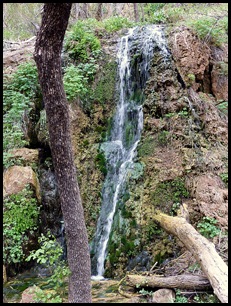 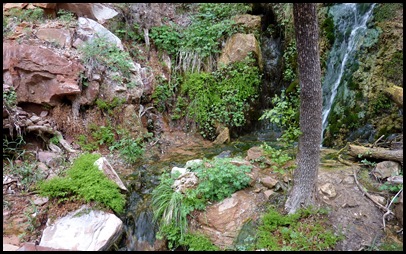 After one last walk on the Pa’Rus trail yesterday afternoon, we went into Springdale to try out a new restaurant, The Flying Monkey. They have an excellent roasted vegetable pizza, and really reasonable prices for a tourist town.

On our way back into the park last night we were passed by a speeding ranger, and were told at the entrance station there had been an accident in the tunnel. We talked to a couple cyclists the other day who saw a vehicle that had gone off the mountain near the tunnel. And we learned on the ride with the ranger there was another death in the park this week, a 60 something year old woman who fell (or possibly jumped) from Angels Landing on Tuesday. The park has had a rough week. I did read that although Angels Landing is the most dangerous hike in Zion, more deaths have occurred on the Emerald Pools trail, probably because it is an easier trail and is taken by lots of families with kids.

Here is a press release on the two young Darwin Award nominees whose bodies were recovered from the Virgin River earlier in the week.

Zion National Park (UT)
Two Rafters Drown In Virgin River
On Sunday, April 25th, rangers received a report of an overdue party from a float trip down though the Virgin River Narrows.  Investigation revealed that two 23-year-old men from Las Vegas had hiked into the Narrows with the intent of constructing a log raft and floating approximately 50 miles through the Narrows to Hurricane, Utah.  The men were not equipped with wetsuits or PFDs, did not have whitewater rafting experience, and had limited camping experience, little food and no overnight gear. They told their father that they intended to record their entire trip on video camera as an entry into the “Man vs. Wild” competition. The SAR operation concluded on April 26th when both bodies and a small amount of personal gear were recovered from the river. [Submitted by Cindy Purcell, Chief Ranger]

It must be quite a job being a law enforcement ranger in a park like Zion that attracts close to 3 million visitors a year. But at least they get to see this beautiful scenery every day. 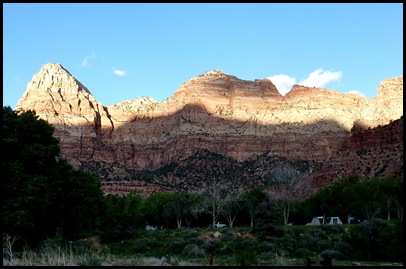