Critters, The Good and the Bad 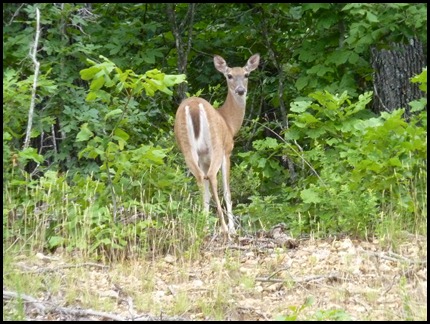 So far the deer have left us alone, and we are enjoying a new window hummingbird feeder. 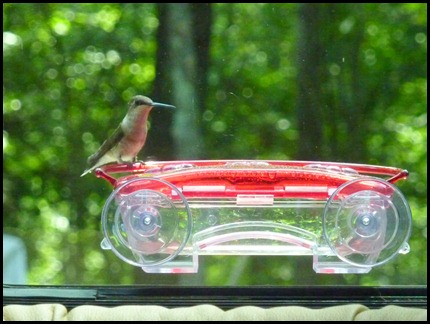 It’s been up a few days but today is the first time we saw three feeding at once. 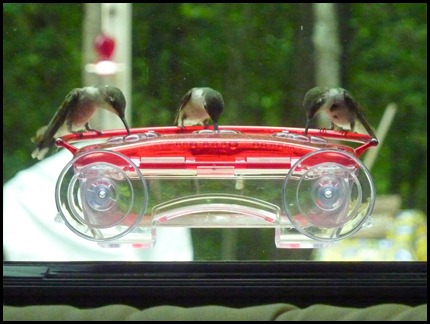 Now for the not so pleasant critters. I found another pest to add to Jim’s list. Today I spotted a trail of ants crawling up the power cord and along the bathroom window on their way to the roof. Tried to remove as many as possible and put Vaseline on the cord below where it plugs in and that seems to be keeping them off.
While I was working on that little problem, I noticed a mud dauber crawling into the hot water heater vent. Yesterday at Home Depot we bought some quarter inch hardware cloth, which Jim installed on the back of the refrigerator vents. It’s not pretty but it appears they can’t get through. 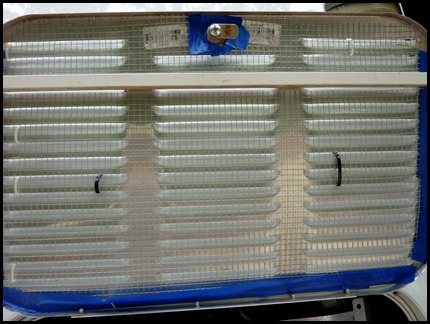 We forgot all about the hot water heater having similar vents. Sure enough, they had already been working hard at building a nest. It was attached to the pressure relief valve. 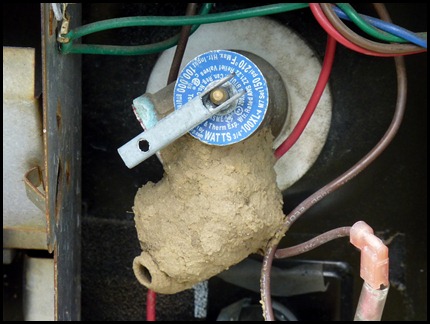 So Jim cut some more screening and put it behind the opening. Later he opened it up and a wasp flew out, so it appears there is another way in or this one squeezed through the holes. Great!
He also checked under the hood of the rig today and inspected the air filter. It looks like the little mice were eating away at the filter. He sprayed all around with peppermint oil, which is supposed deter them. Carl, the concessionaire, also loaned us a bunch of rope lights which we put out on the ground since we’ve heard they don’t like the light. We’ll see if any of this voodoo actually works. At least we don’t have them inside yet like the hosts at the other campground do!
Posted by Jim and Gayle at 5:41 PM