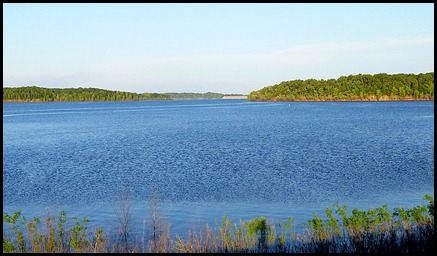 Can’t believe we’ve been here at Lake Wappapello for three and a half weeks now.  Asher Creek Campground reopened on the 16th, so it’s been a slow week at our campground, but this weekend we had quite a few reservations and the 4th of July crowd will be coming in next week. The park superintendant has given us some more responsibilities, which will keep us a bit busier. Nothing too difficult. We are responsible for a weekly inspection of the equipment at the two playgrounds, checking up on the cabin guests, and when the beach opens next week it will be our job to be sure everyone is out at sunset and lock the gate. Also pick up any litter on the beach, which may be the job that keeps us the busiest. Hope not.
We attended the naturalist hike to Allison Cemetery last weekend. We are so impressed with Hannah, this nice young woman who just recently took an exam to become certified. She does an excellent job of public speaking, and has a passionate interest in 19th century life. She even wore a period dress to do the hike, which she made herself. 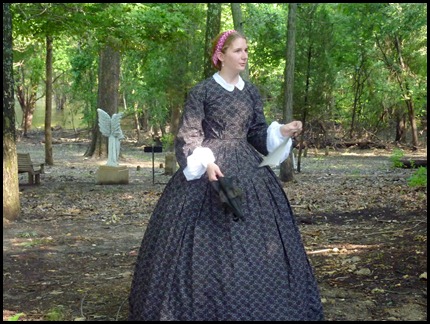 We managed to wash and wax both the car and motorhome this week, as it was cooler and hasn’t rained. Our mud dauber problem seems to be resolved, but it took replacing the quarter inch wire cloth behind the refrigerator vents (which they were still able to get through) with some screening fabric. After defrosting the fridge, it seems to be cooling better in spite of the screen.
We haven’t had any evidence of mice under the hood, so maybe our tacky rope lights and peppermint oil are scaring them off.
We had a bit of excitement yesterday, when the park superintendant radioed the camp hosts and asked us to come to the office. She wanted to let us know that she received a phone call from a distraught aunt, whose nephew had just called her and said he was on his way to camp at Lake Wappapello State Park, and was going to commit suicide and take others with him. They had his name and truck license number, so she wanted us to be on the lookout. Fortunately he never arrived at the park, but we found out later they had found him near Poplar Bluff, he had been released from a mental hospital that morning,and the police got his therapist to call and speak with him. The therapist thought he was fine, and told the police to let him go. We’re still watching out for him.
A couple of nights ago, at 10:40 pm, we heard a truck running outside and then a knock on the door. Some idiot wanted to know where he could put in his boat to go fishing! How inconsiderate. We do have a sign that says we are off duty after 9 and not to disturb us unless it’s an emergency, but we haven’t put it out. Guess we should start doing that, especially with the number of people who are expected here next weekend.
Thursday the Missouri Conservation Dept. came to the park to round up the geese. They band them every year and do an annual count. I thought it would be interesting to watch, but they had a difficult time catching them.and let the young summer employees assist them. I had to leave after one of the geese tried to escape and beat it’s wing on the ground until it was bleeding. Seems like there has to be a more humane way to do that. 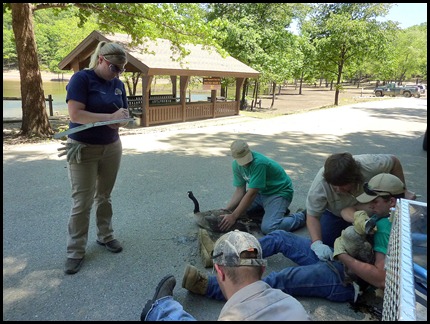 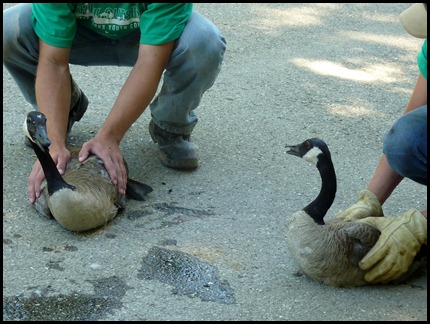 This afternoon we attended an interesting program on wild mushrooms in Missouri. We found a huge edible “chicken-of-the woods” near one of the campsites. I thought it might be good on pizza, so Jim suggested I try it on my half and if I didn’t get sick he would try it the next time. What a caring husband! Tonight we are going to a program on snakes. At least we’re getting a little education.
Next week is the employee picnic, and we were invited to go out on a pontoon boat with the other camp host’s brother to watch the fireworks over the lake on the 2nd of July. It will be August 1st before we know it!
Posted by Jim and Gayle at 4:01 PM