The Exciting Life of a Campground Host 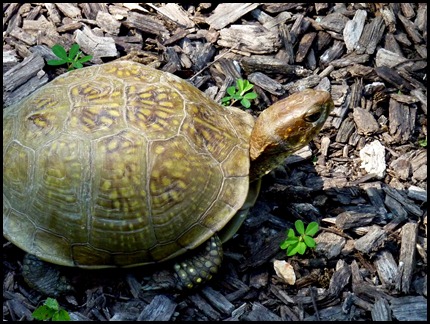 This ornate box turtle was one of the contestants in the turtle race we attended Saturday morning. Our turtle lost but they were fun to watch. After the race we let them all go back into the woods or wherever they came from.
The park has several college students who are the summer naturalists. Unfortunately for them, with attendance so low this year due to the flood, they haven’t had many people coming to their programs. In fact, at the Saturday afternoon “flood talk”, the 4 camp hosts were the only ones there. We learned that this was a record flood event, beating the big one in 1945.
One day we took a drive to Wappapello Dam, about 2 miles from here by water, but a 14 mile drive in the car. They had a video of the floodwaters going over the emergency spillway and eroding away a nearly 400 foot section of Highway T. It was impressive. 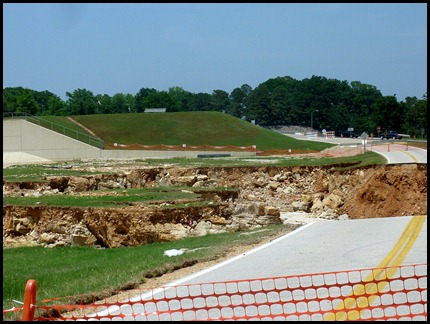 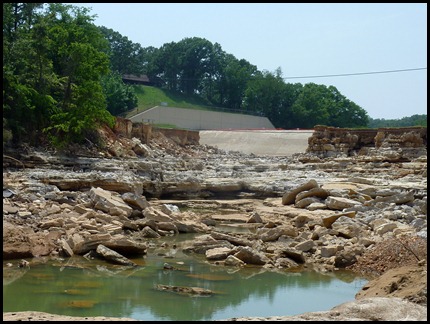 There are several nice Army Corps of Engineers campgrounds around the dam, some of which are still closed. We drove through two of the open ones farthest from the lake, and were impressed with how nice they are. They both had water, electric, and sewer at all the sites for $20 a night, or $10 with the Senior Pass. Probably why not many people are at the state park, since we charge $21 for power only, and a $2 discount for over age 65.
We are getting the hang of our job, which is actually pretty easy. It’s fun zipping around on the golf cart, although I am still making Jim walk everyday, which he complains about since it is hot, humid, and he is full of bug bites. I’m glad the bugs don’t like me as much as they like him. I’ve only had one bite so far, which really irritates him!
Today on our walk we had the pleasure of meeting this juvenile cottonmouth snake. We didn’t know what it was but we showed the picture to one of the naturalists and he identified it. We were close enough to see it had a diamond shaped head, so we didn’t get any closer. It was not a happy snake. We finally managed to get him off the road before someone ran him over. I told you it was exciting here! 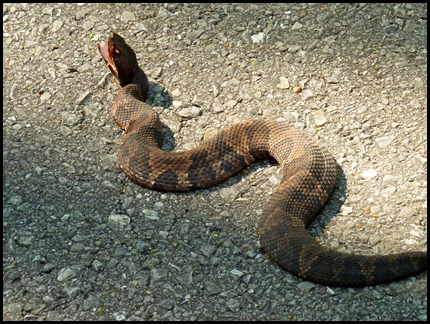