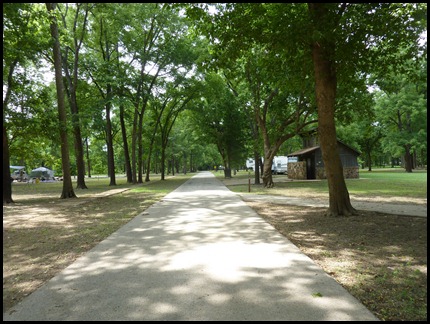 A couple days ago we took a ride about 20 miles north of here to the Greenville Recreation Area, an Army Corps of Engineers campground along the banks of the St. Francis River. It suffered serious flood damage and just reopened this week, although the website says it’s still closed. They wanted to be sure everything was in good working order before they put it back on the reservation system, but through word of mouth there were quite a few people camping there already.
It is a really nice park with electric at the sites, and $18 a night or $9 with the Senior Pass. It’s also just off Hwy 67, which heads north towards St. Louis, so it would be a good place to spend a night if you’re traveling that way.
Back in 1941 when Wappapello Dam was built, the Corps of Engineers moved the town of Greenville 2 miles north to higher ground, and there are a few remains of the old town, including sidewalks, a few foundations, and a cemetery in the campground.There is a mile or so of sidewalk called Memory Lane, marked with signs explaining what used to be there, and we had a nice stroll around and enjoyed reading about the history of the town.
Union Cemetery 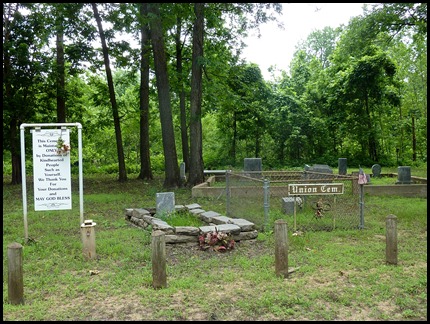 The most interesting tombstone. It was carved like a tree trunk sitting on a pile of logs. The steps from the old courthouse. 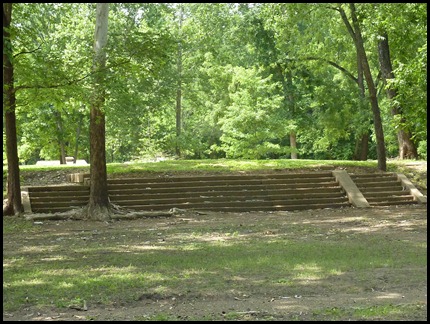 The story of the car dealership. It says one brand he sold was the $600 Whippet. We had to look that one up. Jim had never even heard of it. 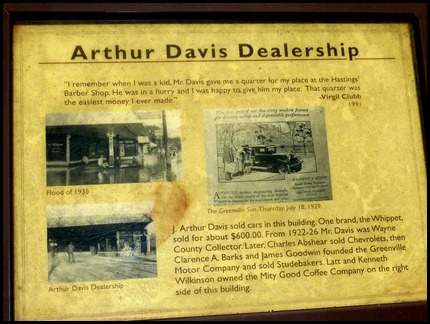 We have 28 reservations coming into our campground tomorrow, and there are over 20 first-come, first-serve sites, so we aren’t sure how full it will get this weekend, but it will be a change from the few people we’ve been getting. Maybe I will have some stories to tell come Monday!
Posted by Jim and Gayle at 4:16 PM