A Quiet Week at Lake Wappapello 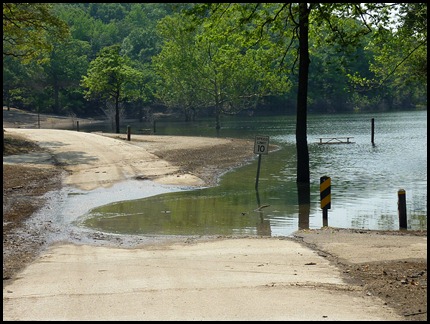 The water continues to go down, and Asher Creek Campground is reopening on June 16th, although some sites may still be out of commission. We are settling in here and it feels like home now. The Ridge Campground has been very quiet. Last night we had only two sites occupied, and the most we’ve had has been ten in one night. The computer system is up and running at the office again but the manager wants us to register and collect at the sites until the 16th. Since we have only been registering a few people every day it hasn’t been bad. Some of the locals that come here to fish are a little rough around the edges, but we’ve really enjoyed meeting and talking to the travelers who just stop here for the night.
Locals who’ve been here for a week. It’s the first time we’ve seen anyone hook up an air conditioner in their tent. 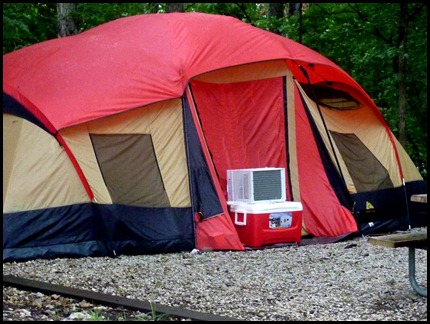 It is nice to be settled in one place for awhile to be able to do things like wash the car, which I did the other day, and receive mail and packages. It’s been like Christmas. We got something in the mail almost every day this week!
We made our first trip to Poplar bluff on Tuesday. Jim had an appointment with a dermatologist to get some spots burned off. Luckily the doctor said they were all just precancerous, but he has to go back next month to see if he needs any more treatment. Jim’s mother used to tell us when you get old things just start sprouting on your skin, and she was right!
I also had to go to the lab and get my thyroid and Vitamin D levels rechecked, and we did a big Wal-Mart spree. Poplar Bluff has a population of about 16,000, and is pretty easy to get around in. We’ll be making the 25 mile drive to town once a week for sure.
The hiking trails here at the park haven’t been cleaned up yet, but most of the trail to Allison Cemetery stayed dry so we were able to take a little hike. The cemetery was under water from the flood and some of the tombstones were knocked over and broken but most are still standing. 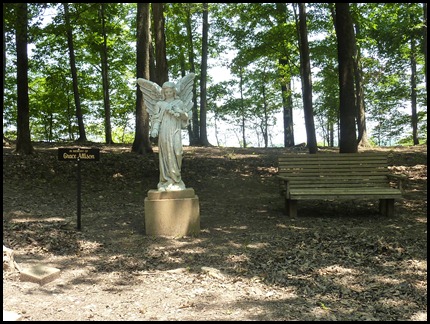 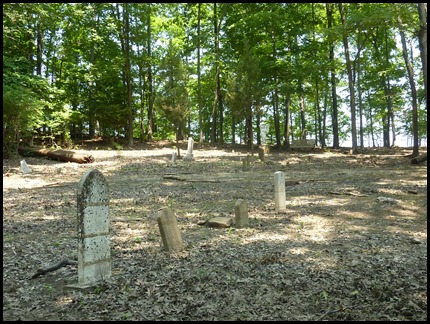 It’s always interesting to read these old stones, especially the birth and death dates. Most of the graves contained children. 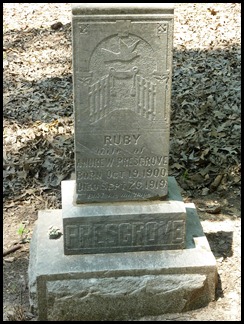 But there were some folks who led fairly long lives. 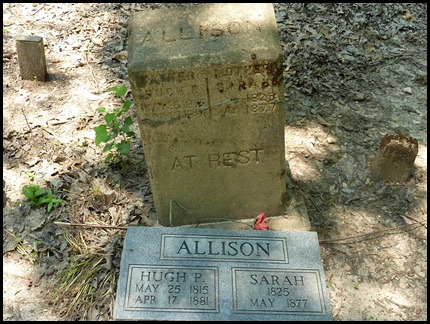 We’re guessing he served in the Civil War. 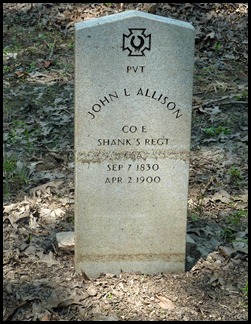 I liked this anonymous stone. Yesterday we attended two naturalist programs, the first being a talk about insects and bites, and how to avoid and treat them. Jim decided he just needs to stay indoors.
Last night was a program about the 13 year cicadas that hatched this summer. There were so many in Branson it was almost deafening outside. Again, the program yesterday morning was only attended by the four of us camp hosts, and Carl the concessionaire who runs the store and cabin rentals. Last night a few people from the cabins also came. This morning it’s frog races, but I’m hoping we can avoid that one.
We were told there are two family reunions coming to the park this week, and that it will be much busier. We kind of like the peace and quiet, though.
Posted by Jim and Gayle at 7:42 AM