Since we didn’t want to wear out our welcome, yesterday we moved from our friend’s driveway to Sara's, a campground just at the entrance to Presque Isle State Park. It’s the only campground near the peninsula, so it tends to be crowded during the summer season. As of Labor Day, it honors Passport America, so we’re paying $20 a night with full hookups and cable that works. The best part is that the 13 mile paved trail through the state park starts just next to the campground, so it’s a great place to walk and bike.

After our miserable weekend of the 90’s, the weather changed overnight, and for the past two days now it’s only been in the 60’s, cloudy and windy with occasional rain just like the Erie weather I remember.

We took a few pictures from our walks along the bay and lake.

White caps in the bay, looking towards downtown.. 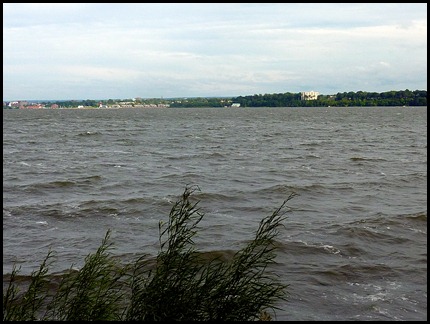 It was much calmer on Lake Erie. 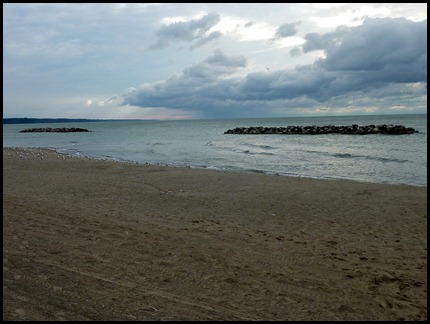 We both went to the dentist yesterday afternoon to get our teeth cleaned, so we got that chore out of the way for awhile.

On the way to the campground yesterday we stopped at a local tire store to get them to check the tires on the Lazy Daze. The sidewalls on the original Michelin tires have had cracks for several years, but they are getting much worse. The guy didn’t try to push new tires on us, but said they should probably be replaced soon to be safe. Since they are 5 years old anyway, we are going to have it done while we’re here. Jim is just researching and deciding which ones we should go with, since we know quite a few people with Michelins who’ve had premature cracking.

Today we did laundry, retrieved something from our friend’s trash that I accidently threw away, and visited the cemetery where my parents are buried. i was stunned that there was no headstone on my dad’s grave. I called the funeral home and they said it had been ordered in August 2007 and should have been placed within 6 months. My brother and sister-in-law came over tonight, so I asked him about it. He said he got some paperwork in the mail several years ago asking him to come in and pay another $75 but he never did it. I think I got the ball rolling again so maybe it will get done one of these years. Family can drive you crazy sometimes! (They have no computer so they never read the blog.)