A few days ago, Shurflo Extreme Series 5.7 pump #3 failed. This time it just stopped pumping water completely, no leaking or surging pressure.  Of course it had to happen with Jim in the shower, just after I had taken one with no problem. Before he replaced it with our new spare, Jim decided to call Shurflo. The woman he spoke with made a suggestion that maybe the 5.7 was too much pump for the needs of  our rig, so she is sending us a replacement 4.0 pump. It doesn’t put out quite as much water pressure, so we will see how this one works. If we get adequate pressure to take showers, and it lasts longer than a few weeks, we’ll be satisfied.

Friday we worked some more on the waterfall and pond area along the fish hatchery trail, cutting out another truckload of blackberry cane. Jim got to talking to a guy last week about using welder’s gloves to pull the vines, and Jennifer kindly got us some. What a huge difference! The thorns don’t go through like they did with the leather gloves and they cover farther up  on our arms. We are learning as we go along. Here’s a couple before and after photos of where we’re working. 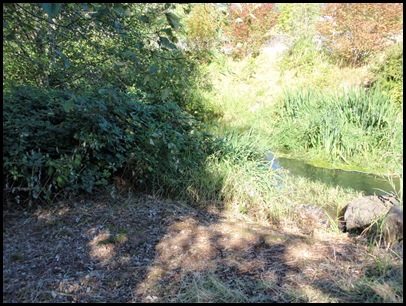 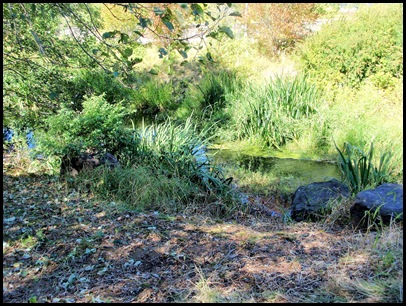 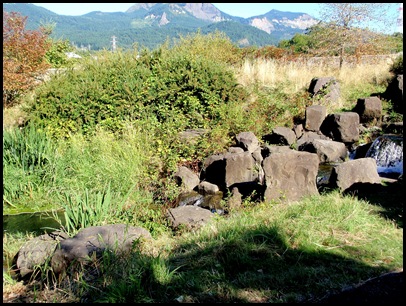 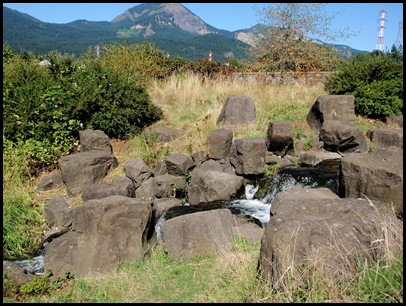 It’s a bit hard to tell, but we are exposing more water and rocks every time we work.

Saturday, we went back to the Juvenile Fish Monitoring Facility, where we are undertaking another big project. Unfortunately, a number of  Douglas fir trees  and other plants have grown up around the chutes where the fish come in (or out, I can’t remember which). Anyway, we are having to remove them, which is quite a chore since some of them are fairly tall. It was drizzling so we got pretty wet and dirty, but we put a dent in the job, with Jennifer’s help.

Today we broke camp and drove the rig to the nearest  Lowe’s and Super Wal-Mart, 25 miles west of here. We haven’t had it out on the road since we arrived here a couple months ago, and it needed to go for a ride. No problems and it sure was nice having the refrigerator right there when we came out with all the groceries!