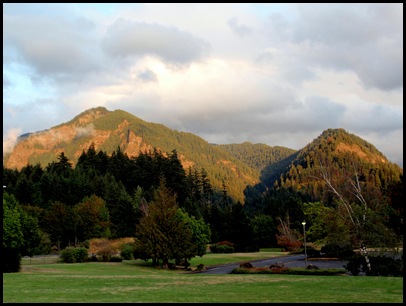 After a dreary, drizzly day, the rain stopped and the sky cleared so we took a walk over to the fish hatchery to visit Herman (the sturgeon). The salmon have arrived to spawn, so there were literally thousands of them finding their way to their birthplace, the Bonneville Fish Hatchery. It is incredible to think they can spend several years in the ocean and then find their way back home to spawn and die. Quite an interesting lifecycle.

We than decided it was time again to try out Walking Man Brewery  in Stevenson, WA. We went there for the first time last week and really liked the pizza and beer, and after this second visit,  it ranks up there as one of our favorite pizza places so far. It’s not much to look at from the outside, and the majority of the tables are outdoors. Both times we’ve been it was in the 60’s, and most of the outside tables were taken. Guess these Pacific North-westerners don’t mind eating cold pizza, but we opted to sit in the cozy basement pub. 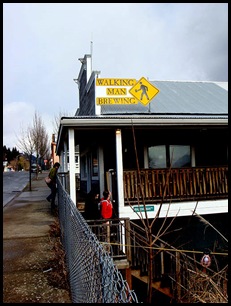 Besides serving a great pizza and excellent beer at reasonable prices, it is an adventure using the restroom. There are 2 doors, one marked Readers, the other marked Dreamers. I stood for a moment trying to decide which was men’s and which was women’s. Since the Readers door was closer, that’s where I ended up. The walls are painted with quotations from various famous people, mostly related to beer, so it is rather amusing the first time you go in.   Then the hand washing part was really challenging, at least for me, as you can see by this picture  Jim took of the faucet. 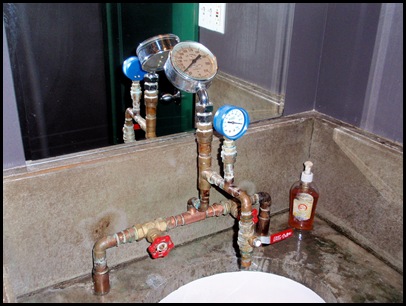 Next time we’ll try the Dreamers side and see what surprises are in store there.