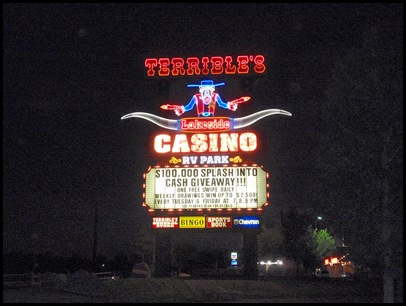 Yes, we made it to Pahrump after a very long day’s drive yesterday of almost 300 miles.  95 was a good route to take, although we had a near accident due to an idiot Sherwin Williams trucker who first almost ran Debbie off the road after he passed her on a hill and tried to get back over before he got by her. Then he passed us going up another hill and couldn’t get by fast enough so he just decided to cut into our lane while he was beside us.  Jim laid on the horn and had to move over onto the shoulder and slow down so he could get back over. I really thought he was going to smash into the side of the rig, but somehow he got by without hitting us. He then proceeded to weave off the road after he passed us, so we aren’t sure what his problem was, but Jim called and reported him to the Highway Patrol. Don’t know if they got him, but Jim also reported him to Sherwin Williams. I’m just glad I wasn’t driving at the time as I may not have been as level headed as Jim was when it happened. Thankfully we only had about 25 miles more to go because we were a bit shaken up.

Terribles Lakeside RV Park actually turned out to be better than expected, and we found an internet special for $19.95 for one night, and  you get the second night free. The sites are fairly close but we have a pretty view out the back. 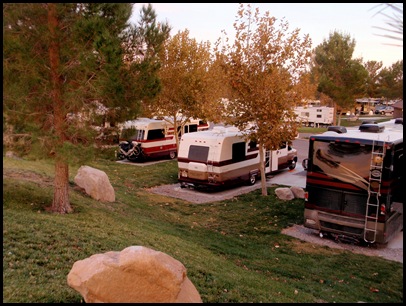 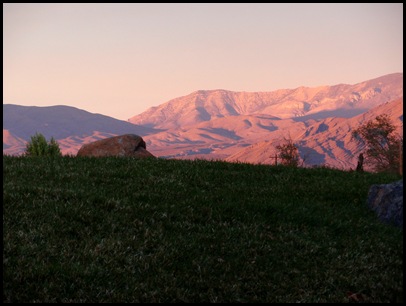 We are probably going to spend at least one more night here at the Passport America rate of $14, since we are tired of driving and also haven’t figured out where we want to go next.  We’re just happy it’s in the 70’s and can enjoy being outside. Cleaned up the rig and went for a nice bike ride today, and wore shorts!