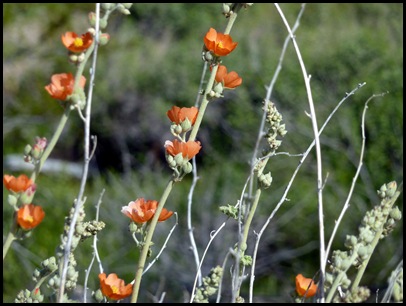 There were plenty of sites available, unlike Usery and McDowell Mtn, where they were full every night. This is another pretty park in the desert with large, well spaced sites. We were lucky to get on the outer loop so we’re hoping we’ll see some wildlife behind us in the hills. 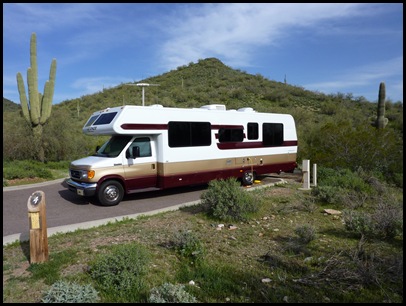 When we drove into the park, there was a sign at the entrance that said  “Snakes are Out”.  We mentioned that we’d need to be careful on the trails.  Little did we know that Jim would come dangerously close to being bitten by a rattlesnake on the road.

We were walking around the campground, looking at an RV near ours, and Jim stepped right over a big rattlesnake on the road. It coiled and rattled and we jumped and screamed. Guess we’ll have to be more careful about looking down while we’re walking. He did get a picture of the handsome fellow. 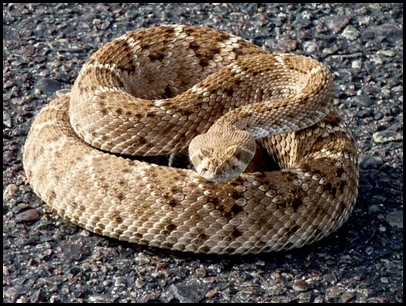 Yesterday afternoon we went to a concert in Fountain Hills Park. The music wasn’t great, but it was a nice afternoon to sit out and watch the fountain. After, we decided to drive into Scottsdale and try Oregano’s Pizza, which we tried to go to in Mesa but wouldn’t wait an hour and a half. Since it was only 4:30 we thought we’d have better luck. We got seated right away but by the time we left at 5:45 the wait was 45 minutes. Unfortunately, it was just average pizza, certainly not worth waiting for, but you never know until you try.  And we will keep trying everywhere we go.