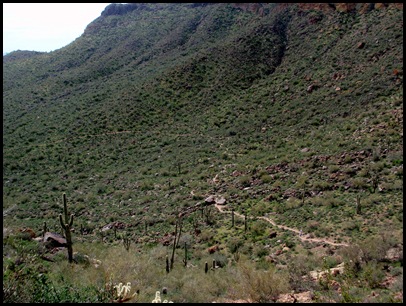 Jim’s tooth felt better yesterday and so did my ankle, so we took the 7 mile Pass Mountain hike through the Sonoran desert. It was in the mid 70’s and partly cloudy, a perfect day for a hike. The brochure recommended taking the loop clockwise since it was a more gradual climb, but we decided to go the other way because we would rather climb up the steeper way and come down the more gradual way. It’s much easier on the old knees and less chance of falling. It wasn’t a horrible climb but there were some steep, rocky areas that would have been tricky to get down, so we were glad we did it that way.

The trail doesn’t go to the summit of Pass Mountain, but circles it.  After about three miles of hiking we reached the pass, which afforded beautiful views of the surrounding mountains. The desert is so green this year due to all the rain but we heard that when it all dries up in the summer, the wildfire risk will be greater. 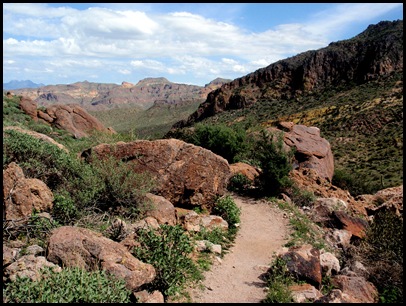 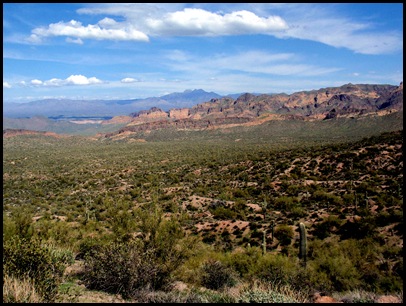 Today it’s been raining with thunderstorms, so we spent the day piddling around. The rain slacked up later this  afternoon  and we went in to Camping World and a used book store in Mesa. It was 6 o’clock when we got done, so we routed the GPS to Oregano’s Pizza Bistro for dinner, a place we’ve been wanting to try but  haven’t been able to with Jim’s tooth pain. Much to our surprise there was an hour and a half wait for a table. Who would have thought it on a rainy Sunday evening? It sure smelled good in there but we left with no pizza. May try them another day for a late lunch or really early dinner.