And the Tooth Pain Continues

Jim’s tooth flared up yesterday and he spent a miserable day and sleepless night in pain. He finally took some old Darvocet and got a little sleep. Today he called the endodontist, they told him to come in, and was told everything looked good. In a small percentage of patients, there is more pain after the root canal. They upped his antibiotics and gave him a prescription for Vicodin. After taking one earlier today, he is feeling better, or maybe he just doesn’t care that his tooth hurts now!  He is now wishing he just had it pulled, but hopefully it will get better soon.

Oreo isn’t too worried about him, he just loves to lay on the picnic table in the sun and watch all the birds. 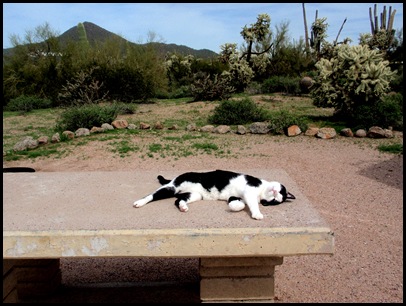