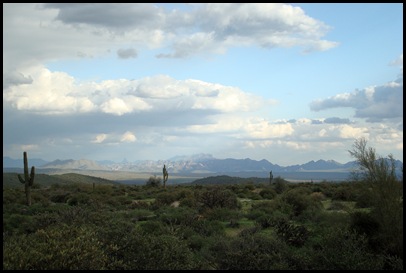 This morning we moved 32 miles northwest to McDowell Mtn. Regional Park, another Maricopa County park. We will now be 10 miles closer to Jim’s dentist in Scottsdale. This is another beautiful desert park, and most of the sites are even larger than the ones at Usery Mtn. So far we are very impressed with the county park system around Phoenix, although they aren’t cheap, $25/night with water and electric.

I dropped our camera last night and unfortunately it broke the lens so it went in the trash. Jim is still blaming all these things on his breaking that mirror a couple months ago. Luckily Debbie is still traveling with us and never uses her camera, so we are borrowing hers until we decide on a replacement.

We arrived here around 10 this morning, knowing that we needed to get here early to try to get a site. There was only one available but the host told us to both go to the site, and if we wanted, we could both stay at the same site since it was so large.  Or one of us could take the next site if someone else left. We just decided to stay at the same one, since we have great views , we aren’t that close, and it is a long way to our neighbors. In fact I don’t think we’ve ever seen such huge campsites in a developed campground anywhere. The only irritating thing is that they charged each of us the $25/night, although since they have 30 and 50 amp outlets, sharing the power box isn’t a problem. 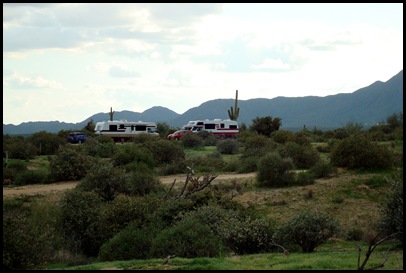 We’ve had 2 cold, rainy days, but that is changing and the 7o’s are back in the forecast.  We did spend some time at Usery Mtn visiting with Chris and Pat Horst,  Lazy Daze owners from Denver who we had never met before. They are a very nice couple and we are still surprised at how many nice folks we’ve met just because we own a Lazy Daze.!

This looks like a really nice area, although there aren’t as many Saguaro cactus and chollas as there were at Usery Mtn. There are over 50 miles of trails here, so we will keep busy. We’ve seen a bunch of jackrabbits hopping around, and we love the wide open spaces. And Jim’s tooth is much better, so life is pretty good.