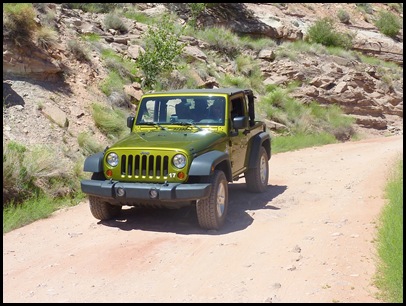 We left Moab a little after 8 yesterday morning ( a record for Jim) and made our way north past Arches to the Gemini Bridges road/trail. In our guidebook it was listed as moderate. Not having much experience in getting off road other than a few times with friends in their Jeeps on roads that were not really that bad, we weren’t sure what to expect.

It was a drive of about 14 miles, with spectacular views. We were a bit apprehensive at first because there were some steep climbs in the first couple miles, but once Jim realized the Jeep could make it, we relaxed as much as you can when you’re being bounced around that much. We stopped and hiked to the Gemini Bridges, two side by side rock bridges you can walk over. 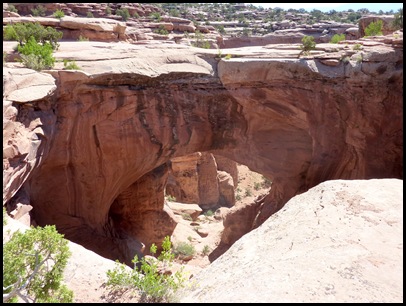 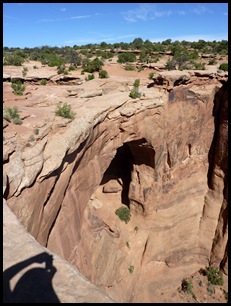 This plaque was on a rock. Beau evidently went off the edge here. 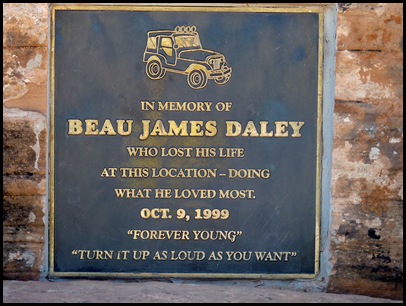 Quite a drop off. 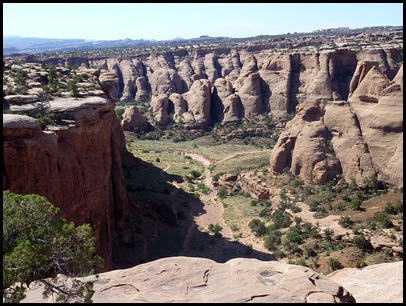 We continued on over slickrock, marveling that we could actually drive over stuff like this. We finally came to a paved road, Hwy 313, which enters Canyonlands National Park’s Island in the Sky District. Just after the park entrance there is another dirt road, the Shafer Trail. The guidebook said this was easy, so we were thinking dirt road with a few rocks and ruts. It turned out to be every bit as technical (for us) as the other trail, but the scenery was incredible. We kept seeing our road at the bottom of the canyon, and knew it was going to be a long trip down. Of course we stopped many times for pictures. Jim couldn’t do much sightseeing while trying to navigate, and I wouldn’t let him since were were on a ledge the whole way down. I didn’t want anyone putting up a plaque with our names on it! 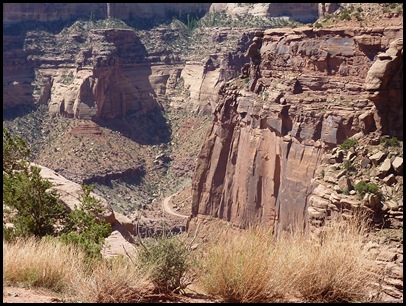 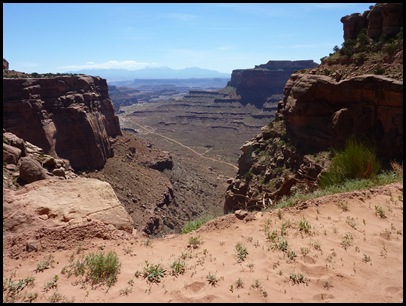 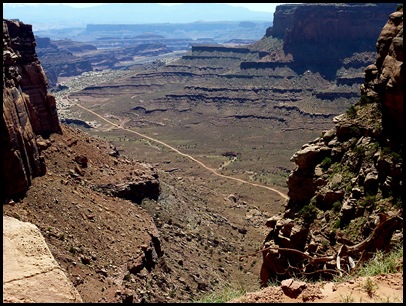 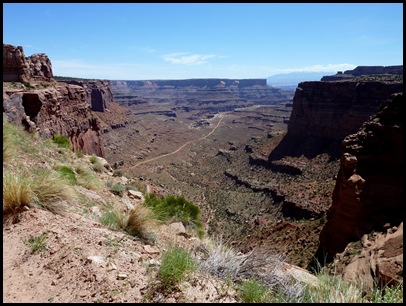 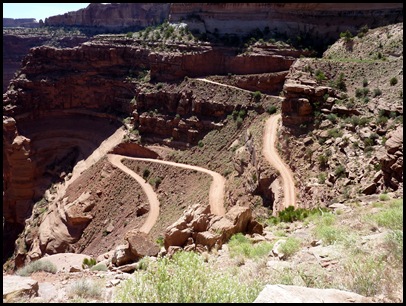 We finally got to the steep switchbacks and made it down safely, although our trip was far from over. 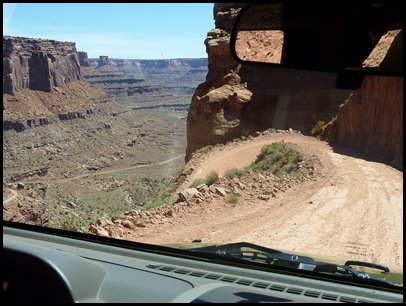 Since we had plenty of time left, we turned off on the White Rim trail to see Musselman Arch. It was even more rocky and technical, but worth it. This is from the trail we hiked to the Gooseneck of the Colorado. Pretty stunning scenery. 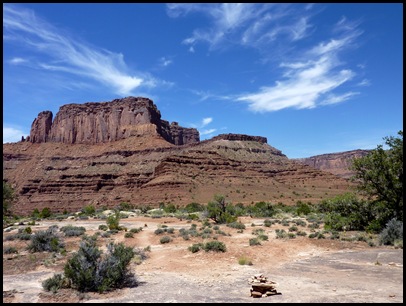 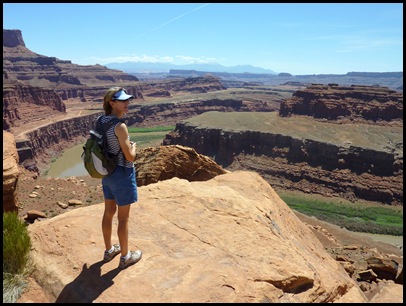 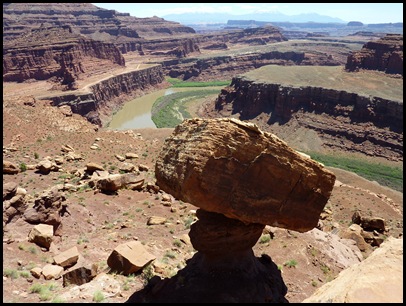 Then we found another overlook we could drive to (barely) and ate lunch. We were the only ones there until we were pulling away. Jim would have gone closer to the edge but I wouldn’t let him. 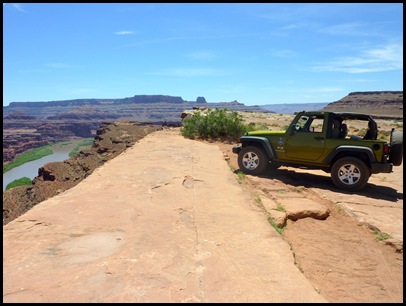 We made it to Musselman Arch, which was quite unusual. 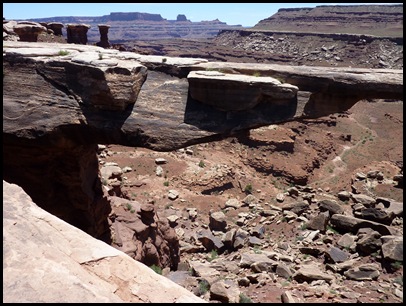 Then it was back to the Shafer trail, and more technical descending. Fortunately we didn’t run into too many other Jeeps along our route. We did see a few mountain bikers, including these two pulling their camping gear in trailers, who were coming up a really steep section in the mid afternoon heat. Young and stupid, I guess! 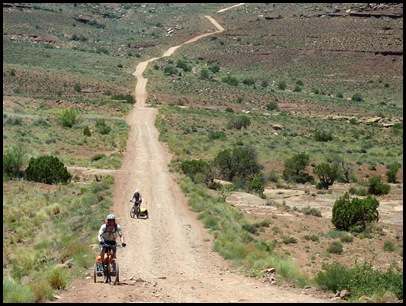 We finally ended up on a plateau under Dead Horse Point State Park, where Thelma and Louise were filmed meeting their demise. 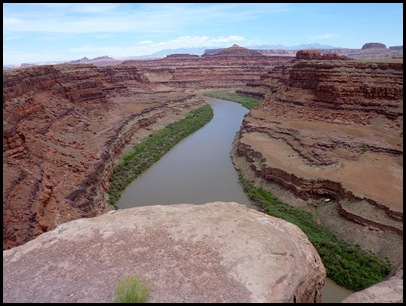 Then on our way back to Moab we passed the potash plant, where these huge “lakes” of mineral water are a beautiful color blue. We saw them last year from Dead Horse point, and they looked like swimming pools from that far above. I found out they add blue dye to the water to make it evaporate faster, leaving the potash crystals. 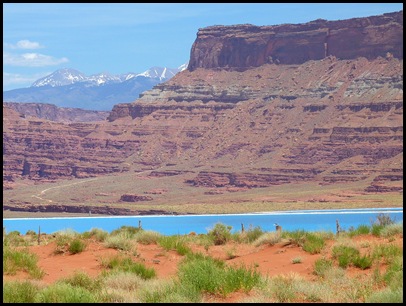 We had a fun but tiring day, nothing a beer and a good night’s sleep didn’t cure. In fact, Jim almost got out and kissed the pavement when we finally got off the dirt roads. We probably won’t buy a Jeep, but we would like a higher clearance vehicle to get off on some dirt roads a little easier.

Then last night we had a nice dinner with Bob and Kathy from Florida who are on a 7 month trip out west. They’ve done lots of traveling in the US and Canada, and got us thinking about a Canada trip. Of course there is still a lot of the US we want to see. Guess we’ll get to all these places one day.