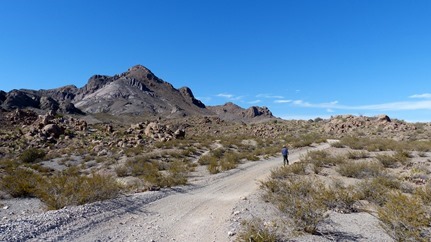 Twice now we’ve hiked in the BLM Dona Ana Mountains area, wanting to get to the mountains. Both times, for various reasons, we gave up before we got there. The other day, instead of parking in the lot, we drove down a dirt road/trail in the Subaru, hoping we could drive up to the mountain and hike from there. The road was fair, but there were a few tricky spots. Since we haven’t done a whole lot of off-roading, we (especially me) are a bit timid, so I got out to walk ahead and have a look. My first impression was not to try this, but Jim thought he could make it. He chickened out just before the top, when the wheels started spinning. So he backed down, turned around and parked. At least we were a half mile closer to the mountains. 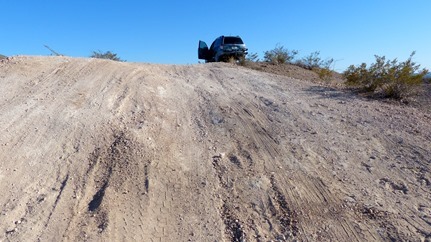 Where he got stuck. It never looks as bad in the pictures. He wanted to try it again but I wouldn’t let him. 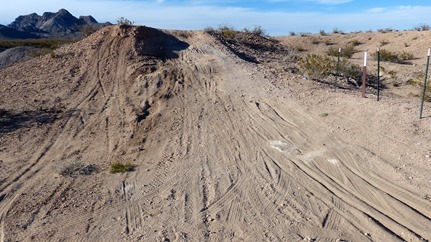 I didn’t want anyone to have to make a monument to us like this one for an unfortunate dirt-biker. 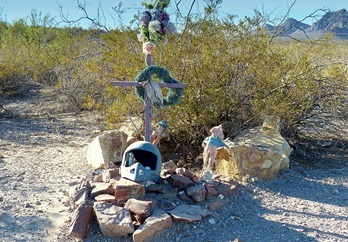 It took us less than an hour to hike to the mountains. As we followed the trail up, we saw an old pickup. The owner was a nice older man who used to work at White Sands Missile Base. We were impressed he made it up the rocky trail in his truck, and he said he almost didn’t, after bottoming out on the skidplates. 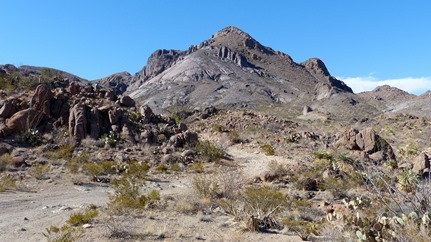 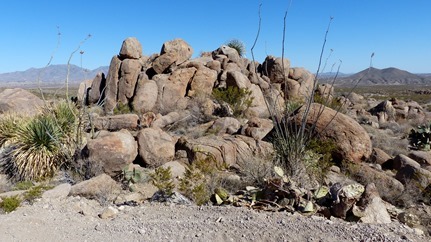 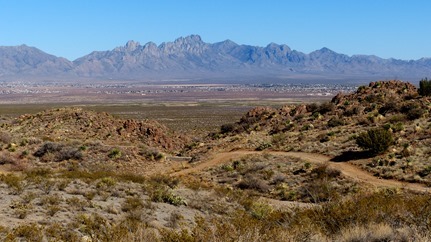 We followed the road/trail around the other side of the mountain since it appeared to turn back to where we started. Wrong! We were a long way from where we wanted to be, and had to cross the desert off trail until we recognized the scenery and found the trail back to the car. Always adds a little excitement when we think we might be lost.

Yesterday we visited Prehistoric Trackways National Monument, about 10 mles from Leasburg Dam State Park, in the Robledo Mountains just northwest of Las Cruces. No danger in getting lost as there was a ranger-guided hike at 9am. There are no signs for the monument and no facilities, so you have to follow the directions on the BLM website to get there. And the road to the parking area was dirt and very rough. Jim liked it, though, another opportunity for some off-road driving.

This area became a national monument in 2009, and the ranger told us they have been working on a management plan for three and a half years. Until it is completed, they can’t build any trails or facilities, but that made it feel more remote. We hiked almost 2 miles to the Discovery Site, where the majority of the trackways were discovered by a private citizen in 1987.

There was no formal trail much of the way, we just hiked through an arroyo. 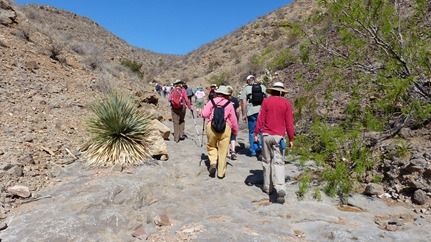 The trackways contain fossilized footprints of 280 million year old animals from the Permian Age. About 2500 slabs of trackways were removed and most of them taken to the New Mexico Museum of Science and History in Albuquerque, but there are still some left at the Discovery Site. It would have been hard to find this without the ranger leading the way. 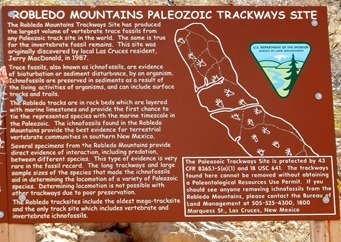 Fossil of an ancient sea creature or plant, we don’t remember. The southern part of New Mexico was covered by a tropical sea during the early Permian period. 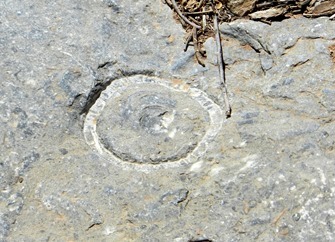 Dimetrodon tracks. The dimetrodon was a pelocosaur, a mammal-like prehistoric reptile that lived entirely on land. 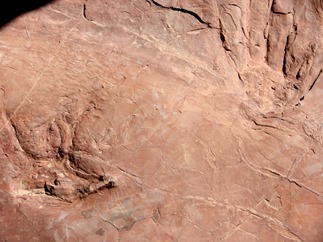 Another dimetrodon, along with other smaller reptile tracks. It is not known exactly what happened to preserve them. 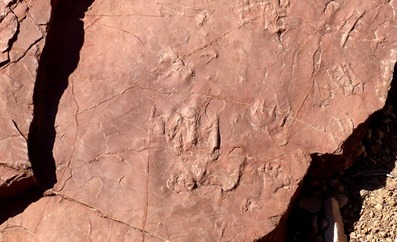 There are also plant fossils, this one the leaves of an ancient conifer tree. 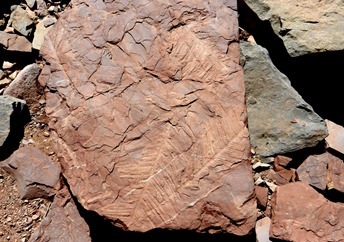 We took a different route on the way back, which took us through the quarry, where thousands of brachiopods are found. They are similar to small clamshells, but look like gray rocks. There are so many, they even allow people to take them. and we did manage to find a few.

Lots of rocks in the quarry. 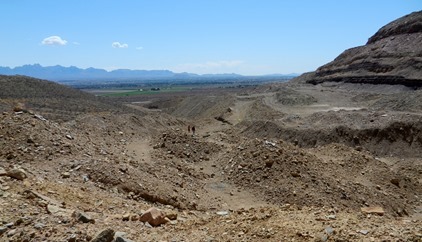 And we had a good view of the volcanic plug on the monument. 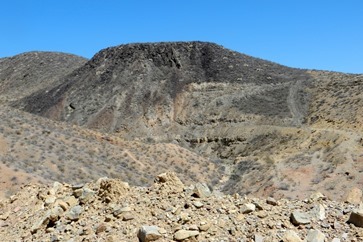 It was a very interesting and educational hike, with Ranger McKinney Briske as our guide. We will definitely go back there and do some hiking on our own the next time we’re in Las Cruces. In fact, we are really growing to like the Las Cruces area. It’s not a huge city, traffic isn’t all that bad, much better than the 83 corridor in Mission/McAllen, Texas where we spent the winter, and there are lots of outdoor recreational opportunities. Also there is a Pizzeria Uno, which we frequented a couple times over the past 2 weeks, and a brewpub. If it just had a Trader Joe’s, we could see ourselves living there one day.