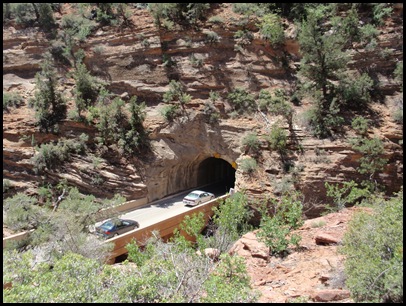 Took a ride in the car along scenic Hwy 9, or the Zion-Mt. Carmel Rd. You may drive your own vehicle along here since this is the only way out of the park to the east. There are 3 miles of switchbacks and a mile long tunnel through a mountain. We purchased a $15 pass to drive the motorhome out when we leave here for Bryce Canyon in a couple days.  There is a ranger stationed at both ends to stop traffic so large vehicles may drive through. Due to the height of the tunnel, large RVs and trucks must drive down the middle. We were a little apprehensive, so we wanted to see what it was like in the car before we attempted to drive the RV. No vehicles longer than 50’ are allowed, so we are going to leave the car unhooked and I will drive it separately.

The road was not too bad since the speed limit is only 20-25 most of the way along the switchbacks. The tunnel is long and dark, but there are “windows” carved into the rock every so often. Must have been quite a feat to build this in the 20’s. Other than some reinforcements over the years, it remains just as it was originally built. You can see this window from the Canyon Overlook Trail, just outside the east end of the tunnel. 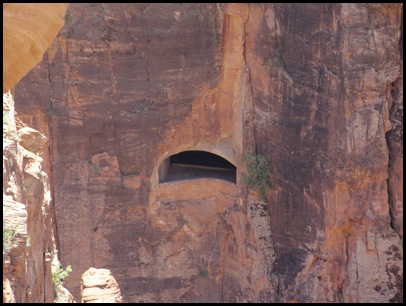 The trail leads to a lovely view of lower Zion Canyon.  You can see the switchbacks in the  road before the tunnel. 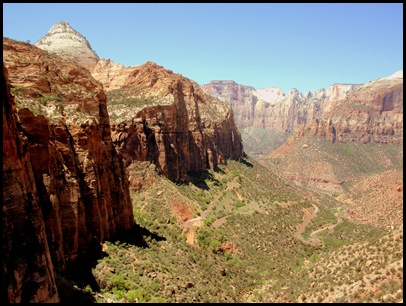 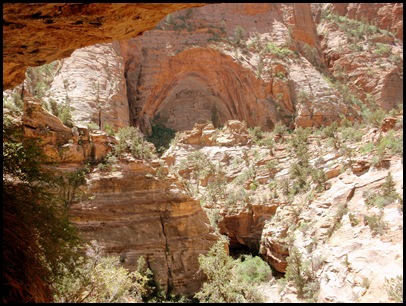 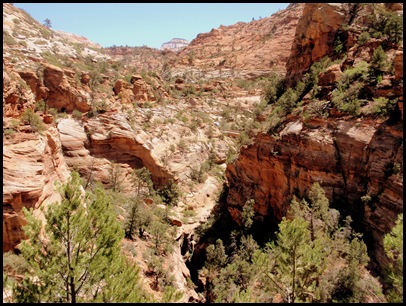 This van was waiting to enter the tunnel when we were walking to the trail.  Jim liked the bumper sticker. 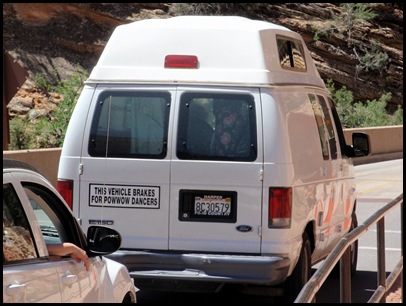 We could only get reservations at Watchman Campground for 4 nights, but we liked the park so much, we moved over to the non-reservation South Campground on Thursday. We will be here another couple days before heading to Bryce.