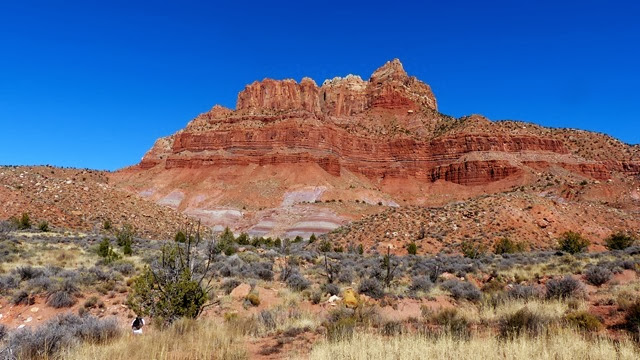 We joined Mark and Bobbie for another Zion hike, this time on the Chinle Trail. It begins near Anasazi, a subdivision of luxury homes in Springdale about 3 miles from the park entrance. The first mile or so of the trail circles around the houses before coming to the actual trailhead in the Zion Wilderness. 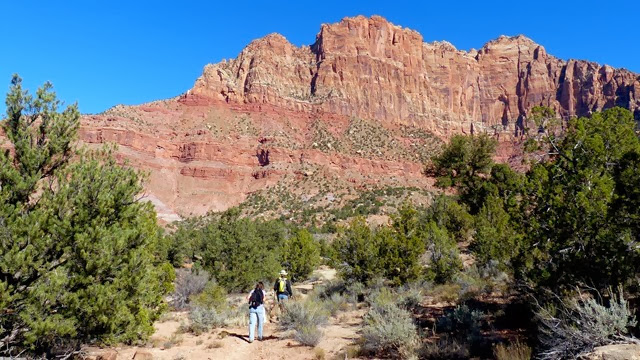 Mark and Bobbie had hiked this trail before as an out and back, turning around at an arroyo with some interesting rock formations, which makes it about 8 miles round trip. They suggested we take two cars and leave one at Coal Pits Wash, a few miles before Springdale. That way we could make a loop out of it instead, which they said would only be about 6 miles. While looking at the sign and map at the trailhead, though, it appeared that it would be much longer than 6 miles, so we gave ourselves the option to just make it an out and back hike if we didn’t feel up to the loop.

Other then some initial climbing, the trail was mostly level, so it was actually an easy hike, at least for the first five or six miles! We passed through a petrified wood forest, where the trail gets its name, as Chinle is a Triassic shale that contains shards of petrified wood. 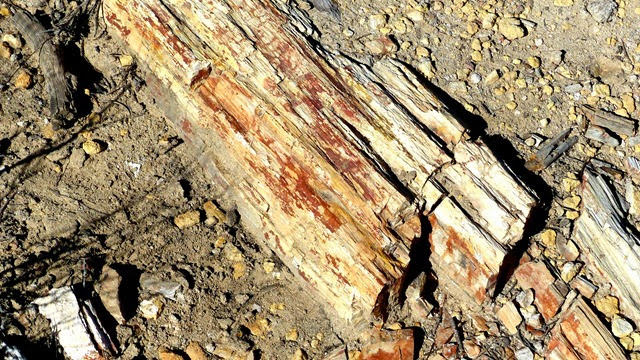 Jim has pretty much become addicted to the trail app he has on his cell phone. Of all days he left it at home on the charger, but Mark thought it was a good idea and had installed the same app on his iPhone just the day before. Not being familiar with the app yet, although he thought he started the track at the trailhead, when he checked our distance somewhere along the way, it said we had come over 90 miles! Bobbie does walk pretty fast, but not quite that fast.

Sometimes two heads aren’t better than one. Jim couldn’t figure it out, either, so we just continued on. 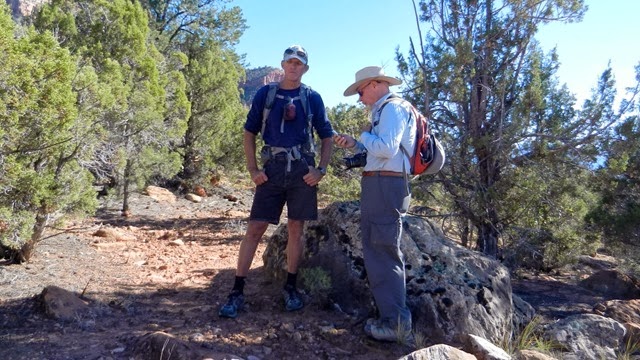 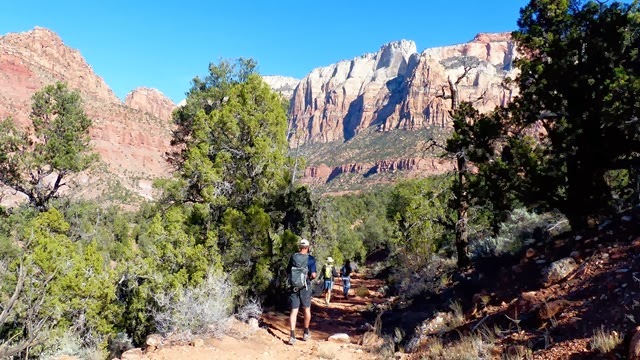 After a quick snack, we went off the trail and into a really cool arroyo. 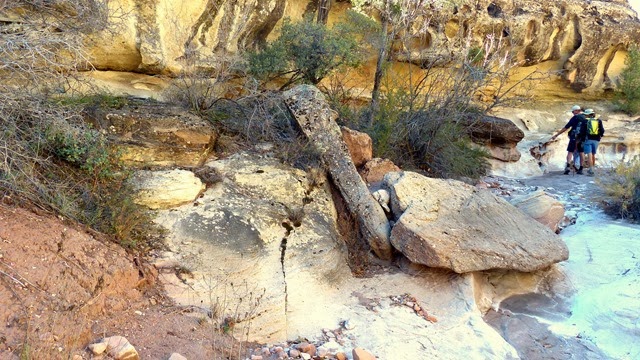 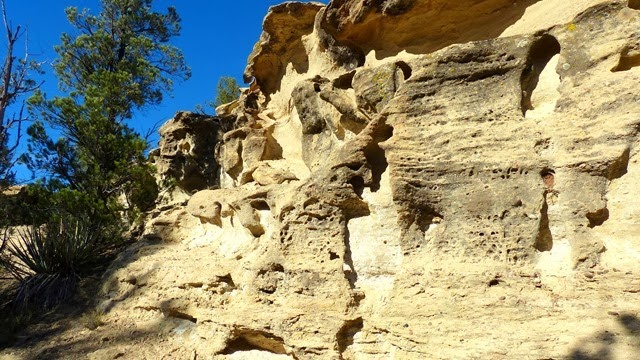 It was after this when things started to get a bit dicey. Mark and Bobbie had never done this as a loop, but Mark was confident we were heading in the right direction. There were some tricky spots that involved rock scrambling, but we followed some horse hoof prints, figuring that if the horse could make it, so could we. And by this time, we were way past the turn around point, so we were committed to making the loop.

Jim and I were pretty confident the horse didn’t go this way, and found an easier path. 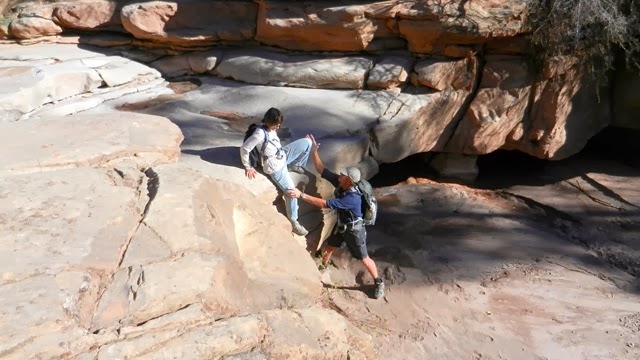 After walking much farther than anyone thought we should have, we finally came to Coal Pits Wash. At least that’s what our intrepid guides kept telling us!

Bobbie getting a snack out of Mark’s backpack. I think even he was getting tired from all the worrying about whether or not we would get off the trail before dark. 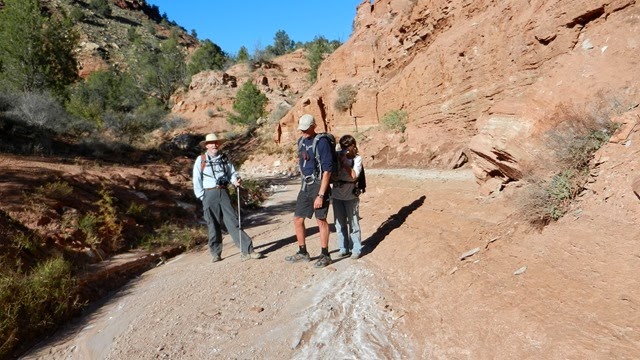 But that didn’t keep us from stopping to take more photos.

Rocks with a sprinkling of powdered sugar. 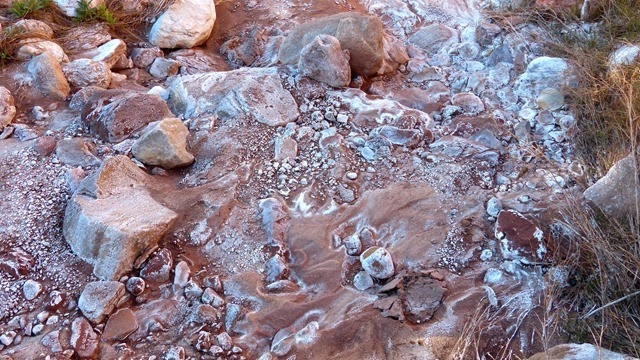 Not much farther to go. It was a good feeling to hear the sound of traffic, and see our car right where we left it. 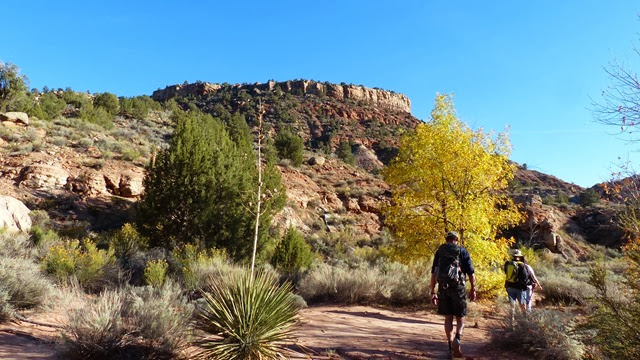 We ended up hiking for five hours, and although we aren’t sure of our distance, we guessed it had to be at least eight or nine miles. Since there wasn’t a lot of elevation change, though, we weren’t nearly as tired as we thought we would be. Great scenery and great company, what more could we ask for in a hike? 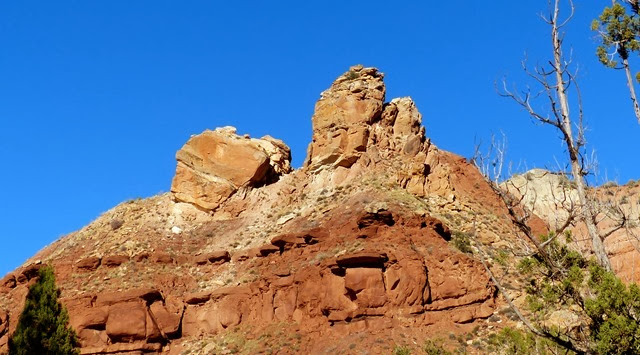 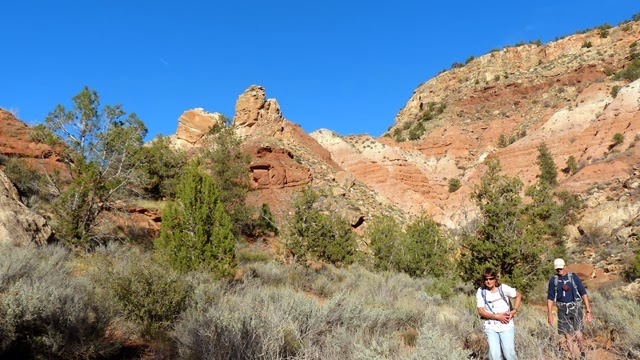 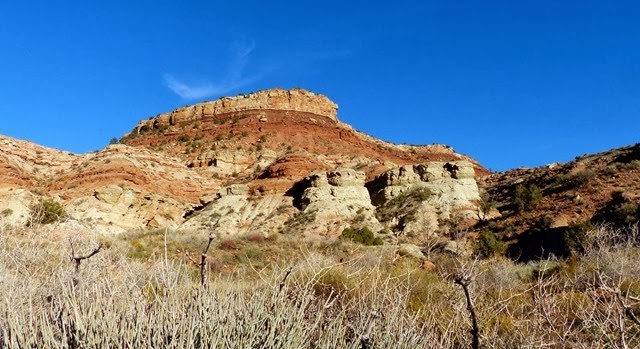 Mark beat me to the post about this hike, so if you haven’t read todays Box Canyon Blog yet, be sure to check it out for some more photos and Mark’s humorous take on the day.

And if you think all we do is hike, we have also been mountain bike shopping the past few days. Bit the bullet today and bought a couple new full suspension bikes in St. George. When we got back we took about a five mile ride next door on the BLM roads, and it was great fun. Since we have no plans to go back to south Texas where we got a lot of use out of our road bikes, we figured we may as well break down and go back to mountain biking. At least we can ride them anywhere, and we spend most of our time on dirt roads anyway. Now we’ve got to clean up our old bikes, take pictures, and post them on Craigslist. We have to sell them in the next three weeks because we have no way to carry four bikes, so wish us luck.

On another note, our sewer hose developed a leak so we ordered a new one from Amazon. At least the giant box it came in has given the cats some entertainment. They are about a year old now and all grown up but as rotten as ever. 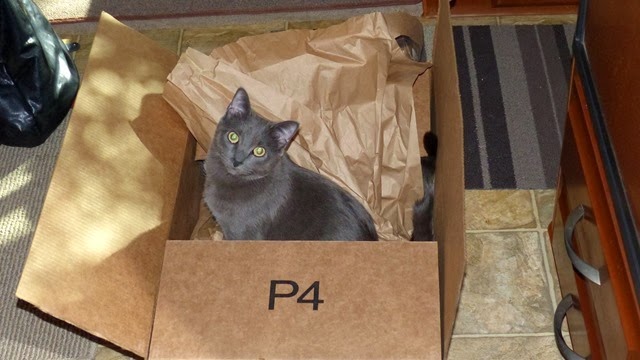 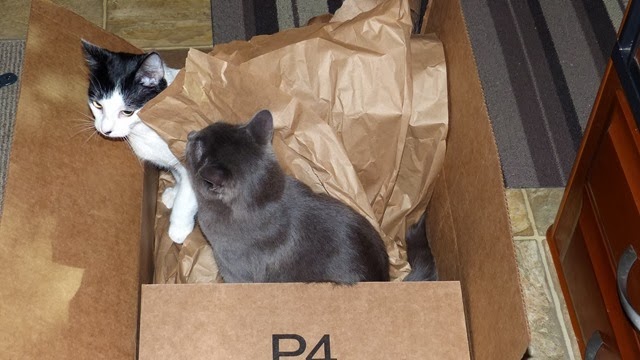