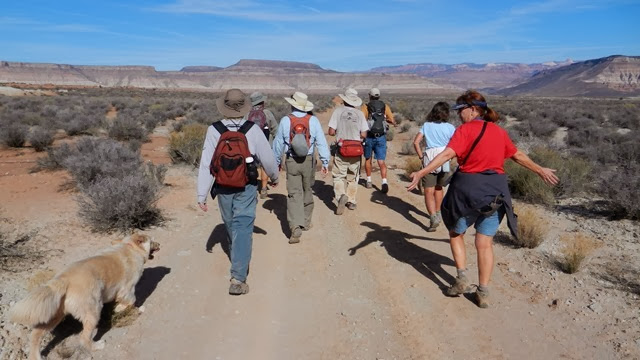 Sorry, no photos of either, but of course there is a story to tell. Yesterday our hiking group, which has now grown to eight humans and six dogs, one of which is a neighborhood tag along, took a little hike on the BLM land behind the RV park. Boonie suggested a walk through one of the washes, so that’s how we started. It was wet and muddy in the beginning from a spring we discovered along the way. Fun for the dogs but probably not so much for their owners who had to clean them up later.

Debbie’s crazy dog Rupert, Boonie’s energetic dog Coffee Girl, and Blue, the neighbor’s dog who loves to run with us when we hike or bike in that area, kept running up the banks of the wash out of sight. Debbie worries that Rupert will run off, so one time when she called for him after he disappeared, he came running down the embankment. Oops! Way too steep to get down safely.

Boonie, Susan and Debbie hoping to catch him, but he would never get within their reach. 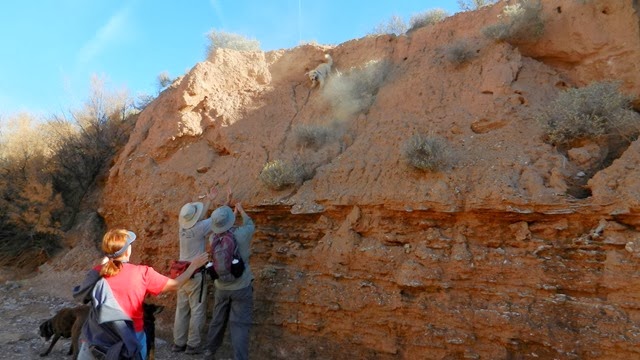 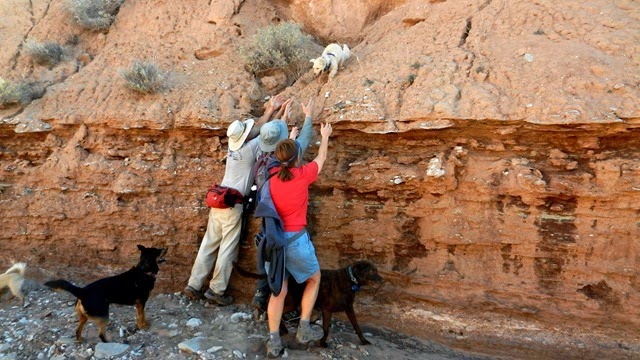 Guess he didn’t have confidence that they would catch him, as he tried to go back up, causing a little landslide. Finally Blue found a gentle slope to the right and walked up to guide Rupert down the easy way. Smart pup! Blue, that is, definitely not Rupert!

Susan giving Jake and Carly a much needed drink. They did some serious running. 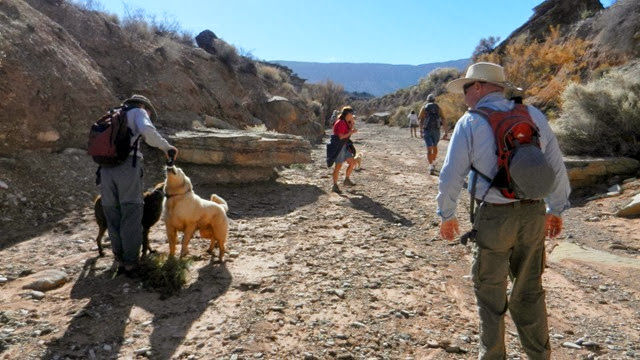 It was a fairly easy hike for us humans, just a little bit of rock scrambling at an impressive rock slide. 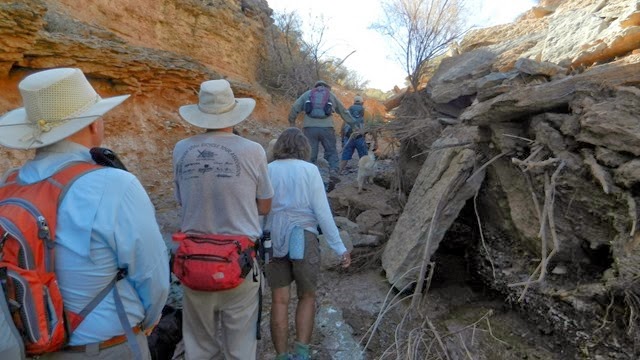 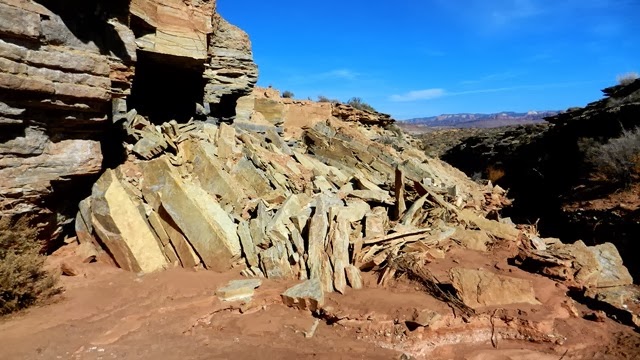 We spotted what we determined was a red tail hawk sitting on a fence post on a nearby hill. It took off a few minutes later, which caught Coffee Girl’s eye. She charged up the embankment after it, then literally came flying down and leaped off about a twenty foot ledge to rejoin the group. Everyone breathed a sigh of relief when she landed safely but I don’t think she even blinked an eye! She’s an amazing dog. 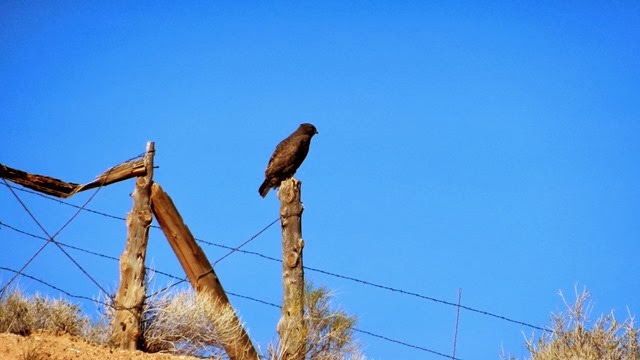 Mark and I kept trying to get a group dog photo, but this was the best I could do. Dog Whisperer Boonie, sharing a granola bar with the pups. 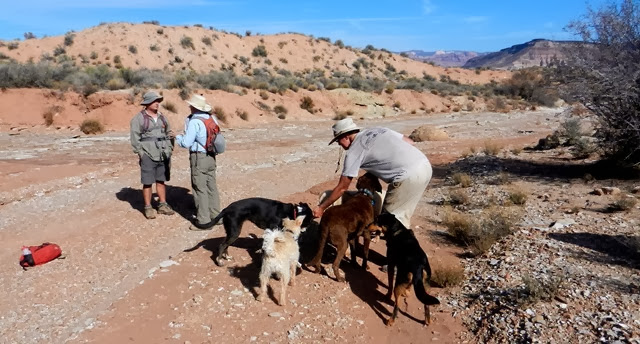 Some members of our group were getting hot, so we turned around after about three miles and bushwacked to the dirt road for a different route back. It’s a lot of fun hiking with others. The time goes by fast since there are so many distractions.

The previous day was a mountain bike ride on Flying Monkey Mesa, actually Hurricane Mesa but it got its nickname from the government test facility that used to be located there. There is a badly broken narrow, steep, winding paved road leading to the top, and masochistic Mark and Boonie rode their bikes up, while sensible Bobbie, Jim and I loaded our bikes on the car and met them at the top. We still had to do some climbing, but with plenty of scenery stops it wasn’t too bad. 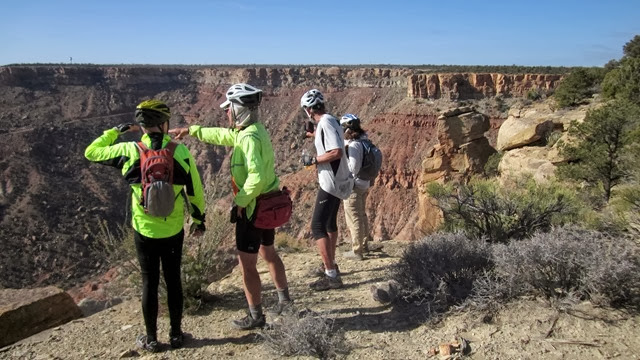 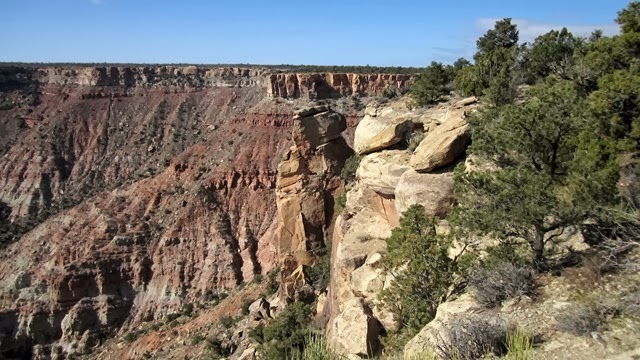 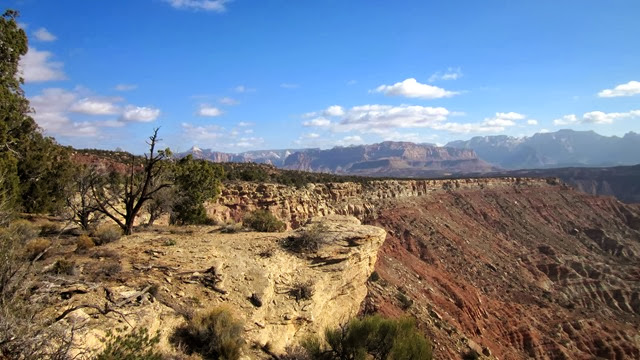 Boys and their “gotta stand on the edge” mentality. 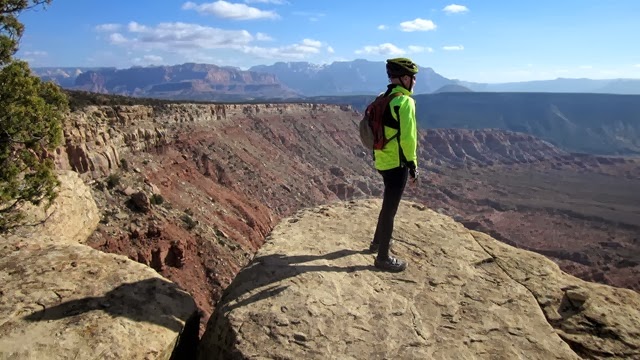 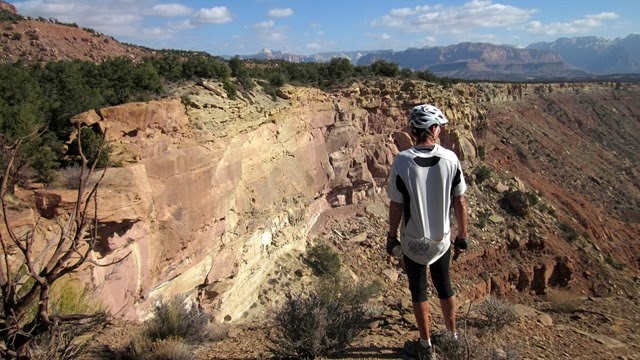 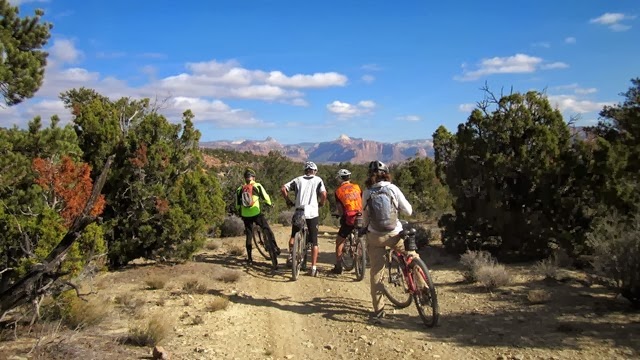 Mark did a great post last year about the history of Flying Monkey Mesa.  If you’re interested you can read it here. And I found another informative article from the LA Times here. No monkeys were seen on our ride, though.

Time to head out for another bike ride. Guess if it doesn’t kill us it will make us stronger, as they say…