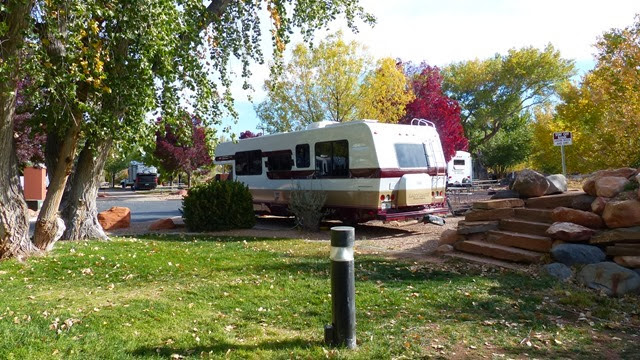 We’re glad Box Canyon Mark and Bobbie suggested we spend November at the Zion River Resort. Yes, it’s an RV park and the sites are closer than we care for, but the landscaping is lovely, we are parked on gravel instead of dirt, there is green grass and the trees are showing their autumn colors. We even have the Virgin River right behind our site. Plus Zion National Park with all it’s splendor less than 15 miles away.

From November through March the park offers very discounted Snowbird rates. We are paying $460 (plus electric) for the month for our back-in riverside site, which normally rents for $1100 during the busy season. Hard to believe anyone pays prices like that! The one downside is there is no Verizon signal here (the brochure says AT&T works), but the park does have WiFi. So far it’s working fairly well, but will most likely slow down if more people arrive.

Yesterday our guides took us north of Virgin to the Kolob Terrace section of Zion National Park. 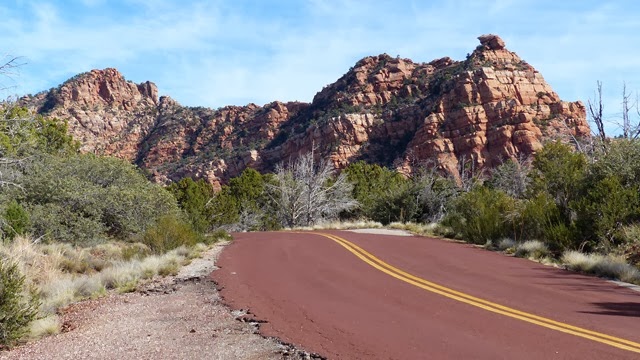 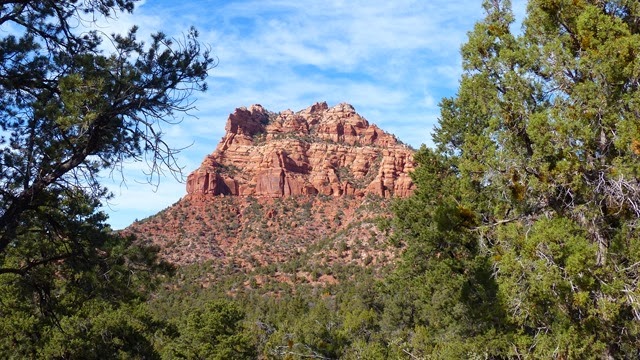 Bobbie suggested a 7 mile hike, with not a lot of elevation gain or loss. Having hiked with Mark and Bobbie last year in Ouray, CO, we had a feeling her opinion of not much elevation change was going to be different from ours. And according to Jim’s phone app, we hiked 6.5 miles round trip, but dropped 1,200’ on the way down. Which meant 1,200’ of climbing to get back to the car. But we’re not complaining! It was a great hike with our group consisting of Jim and I, Debbie, our buddy Boonie, who is dispersed camping nearby, and Mark and Bobbie.

The first portion of the trail was a level walk through a pine forest. Then came the white/gray rock. 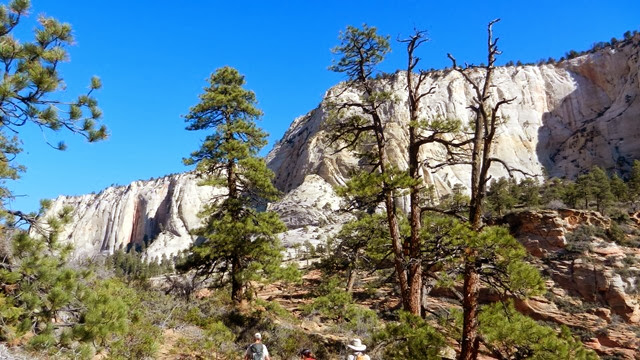 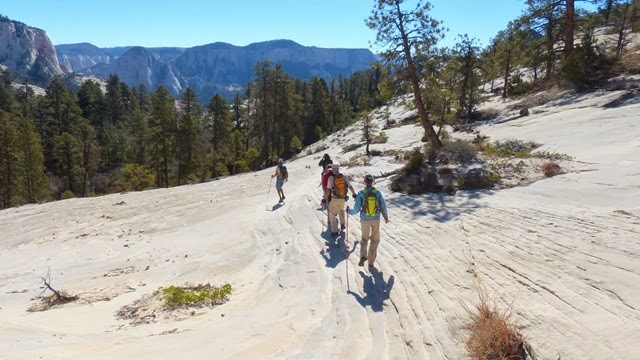 We even crossed a small stream 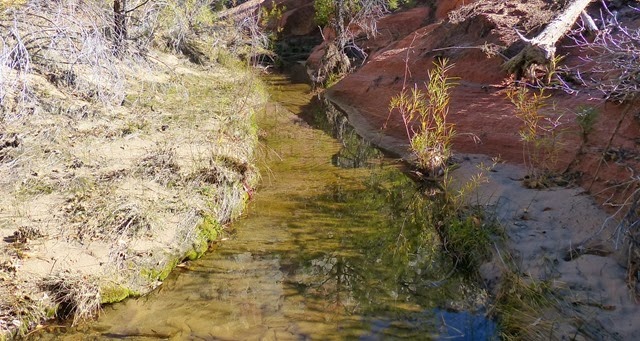 Hey, this is Zion, so where’s the red rock? We didn’t have to walk too much farther to find it. So which way do we go now? 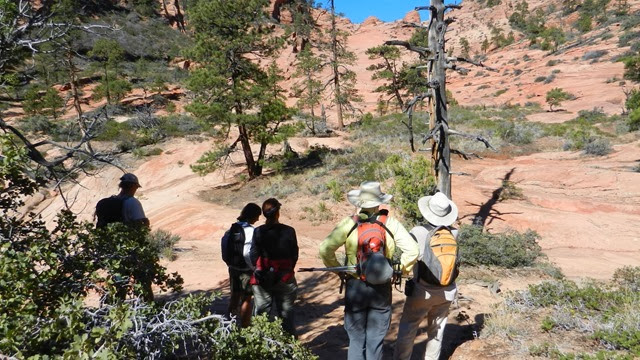 Down, down, down. Just pick a path on the slick rock and try to follow the cairns. 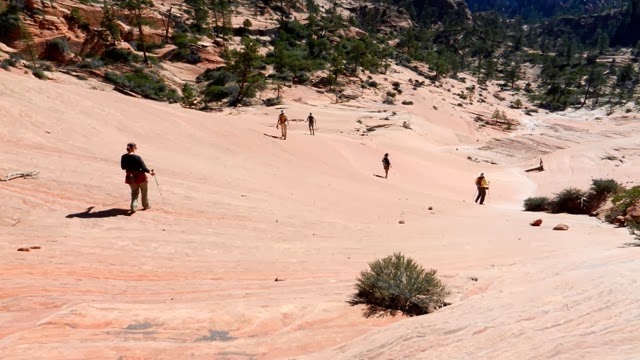 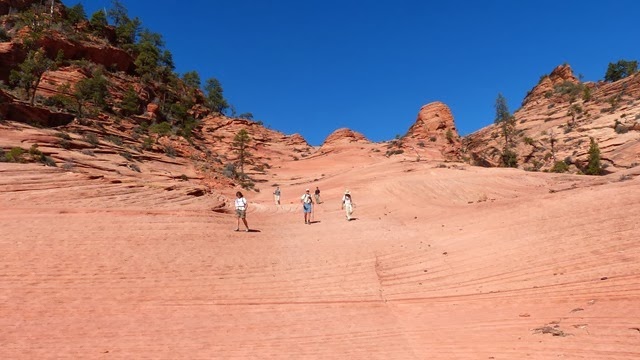 We had our lunch next to some amazing balanced rocks poised on tripods. 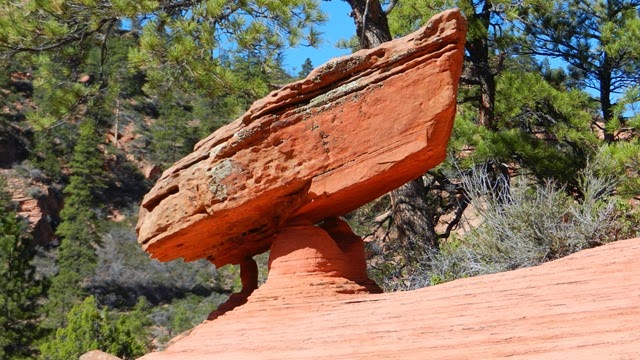 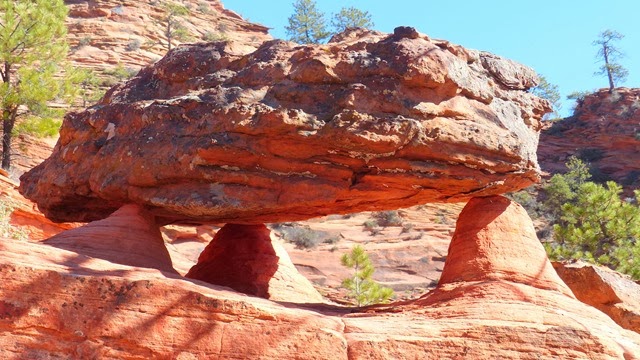 We’ll see if Mark’s photos came out better than ours. 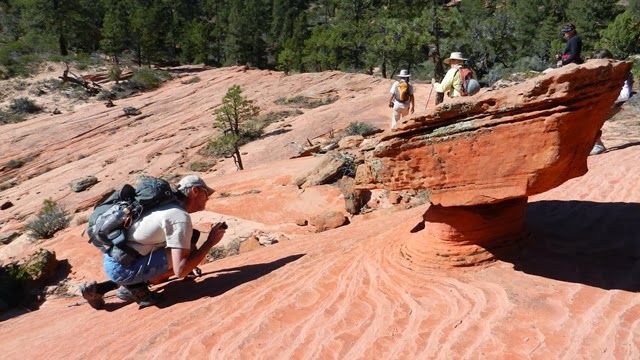 Then it was time for the climb back up. We worked up a pretty good sweat. 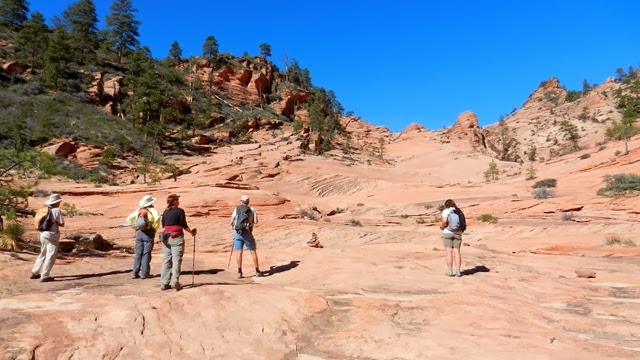 And yes, it seemed much steeper than it did going down. But with the scenery and the chit chat we were soon back at the trailhead. 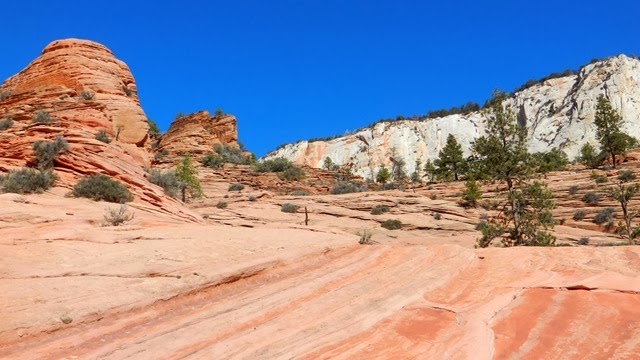 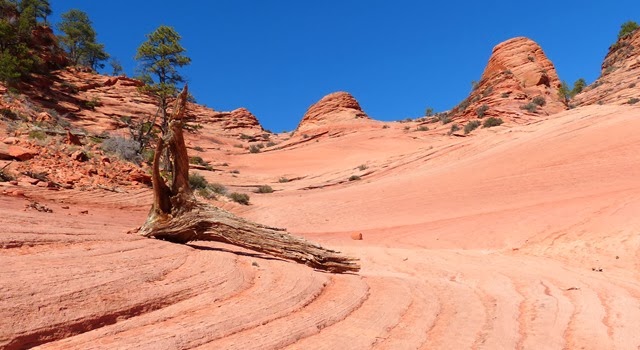 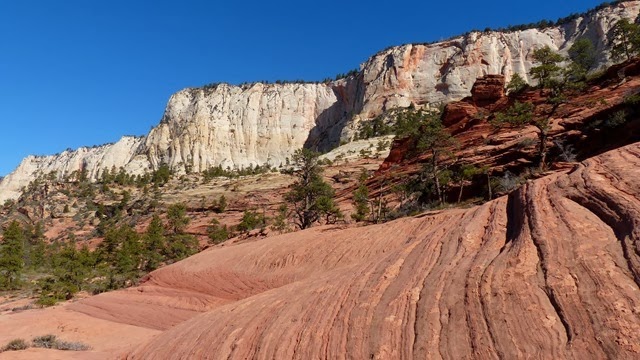 After being awed by Yosemite this past summer, we wondered if Zion would still be our favorite national park. I think we both vote yes. And boy, did that long shower in the RV park’s restroom feel good! (Sorry, Boonie, couldn’t resist.)