In The Heart O’ the Hills 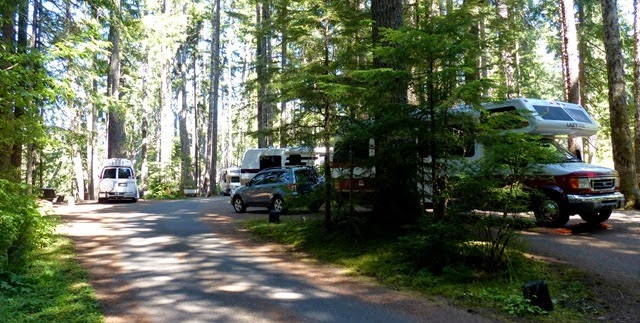 We are now in another Olympic National Park campground, Heart O’ the Hills, on Hurricane Ridge Road about five miles south of Port Angeles, WA.

We had been told by our friends to unhook the car at the visitor center because it was a steep climb up to the campground. Since all of the RV parking spaces were taken up by cars, Jim just pulled out of the traffic lane as best he could and we disconnected the Subaru. When I got in and turned the key nothing happened. I looked down and noticed we had left the lights on so the battery was dead, and I’m sitting in the road. A good samaritan pulled up beside me and asked if I needed help. He just happened to have jumper cables, something we’ve been meaning to buy for years. That and a new battery for the car are both on our list for the near future.

I think we set a record for spending time trying to find a suitable campsite here. Although the road and sites are paved, most are short and not at all level, typical of most national park campgrounds. After about a dozen tries, on a whim Jim pulled into a site that looked too short, but surprisingly we fit and it was fairly level. We did have to park our car at Debbie’s site, though. Then yesterday morning we saw a van leave a nice long, open pull through site so we moved. All is well.

$6/night with the senior pass, drinking water spigots, flush toilets, no dump. No hookups, of course. 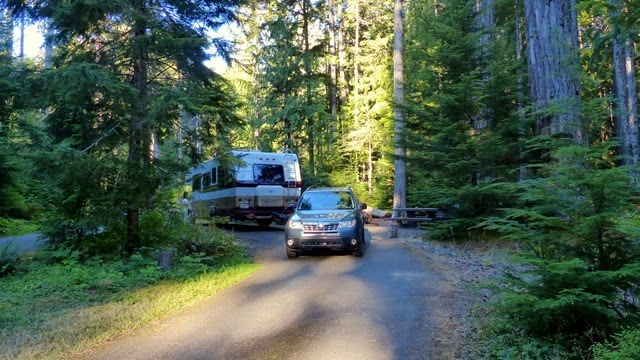 That first afternoon Kim, Debbie and I set out to hike the Heart O’ the Forest trail from the campground. I hadn’t read about it but the sign said end of trail 2 miles. After what seemed like at least that distance there was no end in sight and much of the same. Trees, trees and more trees. Many of them requiring us to climb over or under.

Kim, not having fun at this point. 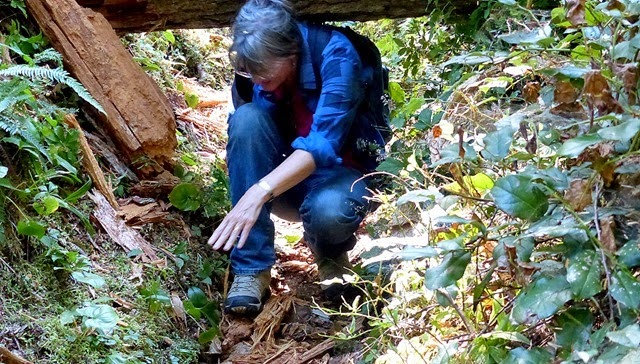 Kim and Debbie waited for me while I continued on as the trail descended, then crossed a creek. After another 10 minutes or so I turned back, never quite making it to the end. 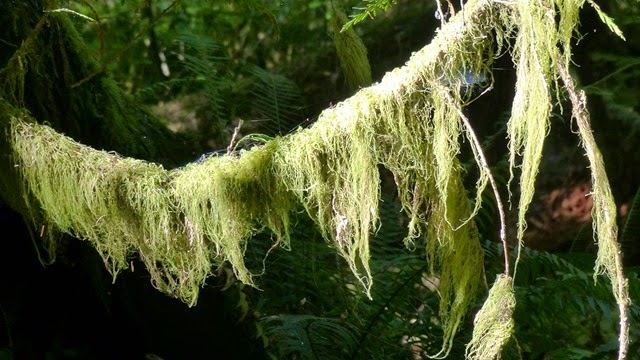 Then yesterday we all drove the 12 miles south, climbing to Hurricane Ridge at 5,400’. A beautiful drive, and we were impressed with the number of cyclists slogging up that steep road.

The visitor center has quite a location. The name Hurricane Ridge comes from the propensity for high winds, although it was quite calm while we were there. 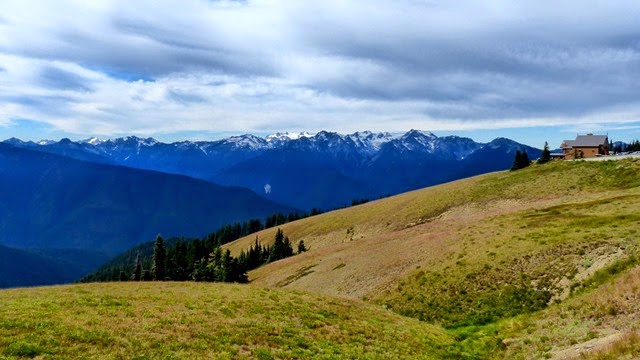 Since the Metamorphosis Road crew recently hiked the Sunrise Ridge trail, we decided to follow in their path. It’s been way too long since we’ve been on top of the world looking off at mountains, and it was a wonderful feeling.

That would be me and Carla, with the Olympic Mountains in all their glory behind us. 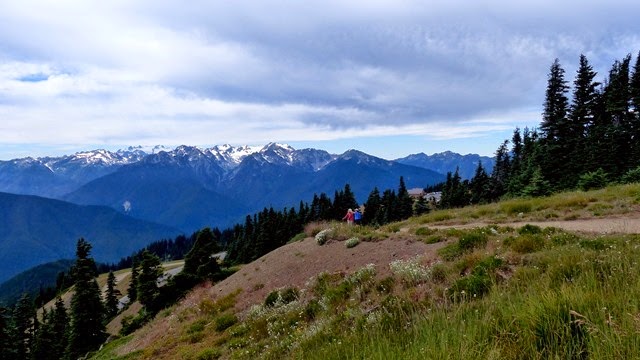 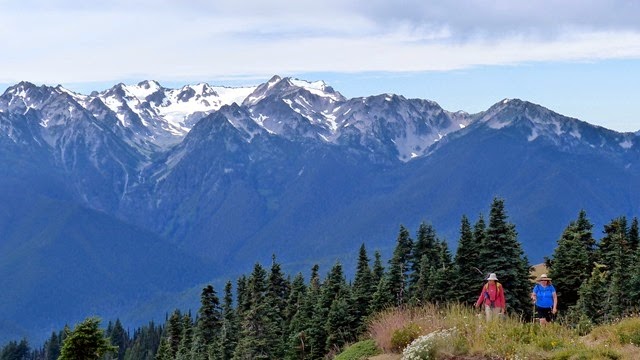 Jim turned back about a mile in, not wanting to overdo it, although his leg was feeling pretty good. Debbie and Kim turned back at 1.5 miles, when the previously ascending trail made a steep drop. Chuck and Carla, good sports that they are, went along with me, wanting to at least do two miles before turning around. Had we kept on we could have climbed to the top of 6400’ Mt. Angeles. Maybe in another life.

Chuck, Kim, Carla, Debbie, and Gene, a trail volunteer who kept us going by telling us we would probably see mountain goats on the trail if we continued farther along.

This was a particularly steep section. Don’t they all look like happy hikers? 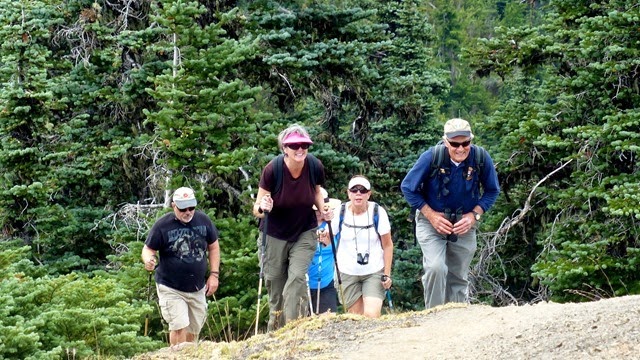 But it was worth every step. The darker blue is the Strait of Juan de Fuca with Vancouver Island behind. 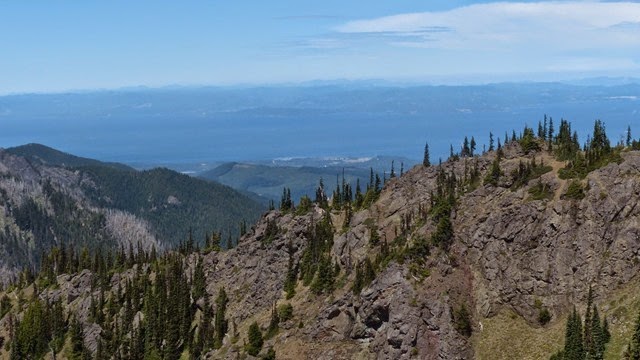 No mountain goats but still a great hike with good friends. 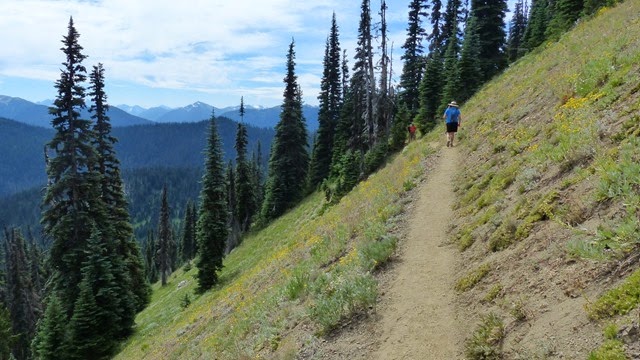