No Puffins, No Whales, No View

While most of the group packed up and made their way towards Port Angeles, Jim and I wanted one last look at the Pacific coast, so we headed about 40 miles northwest to Clallam Bay. We stopped at Sam’s RV Park, got settled in a site, had lunch, then took the Subaru for a ride.

An adequate place to spend a night but there aren’t a lot of choices in this area. $25 with full hookups, and no trees! 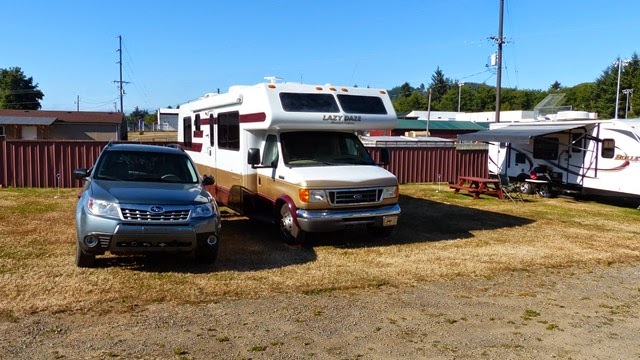 Highway 112 is a very scenic drive along the Strait of Juan de Fuca. Our memory was faulty about Juan de Fuca the explorer, but Jim found this article and it’s possible he never even existed. Don’t believe everything you learn in school.

We headed west to Neah Bay and made several stops to look at the coast and the fishing villages along the way. 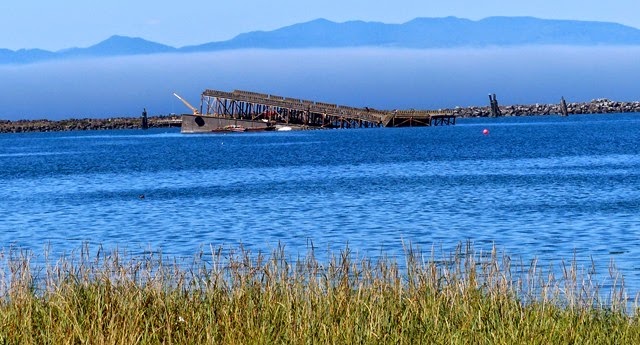 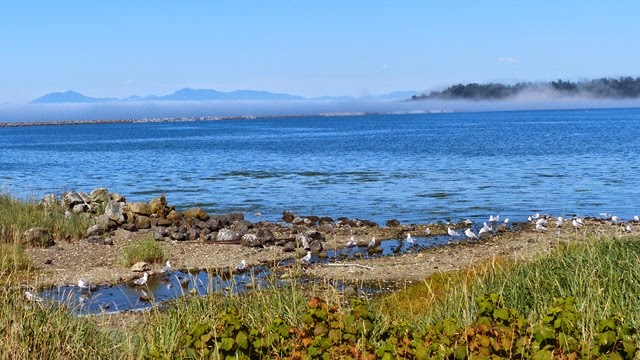 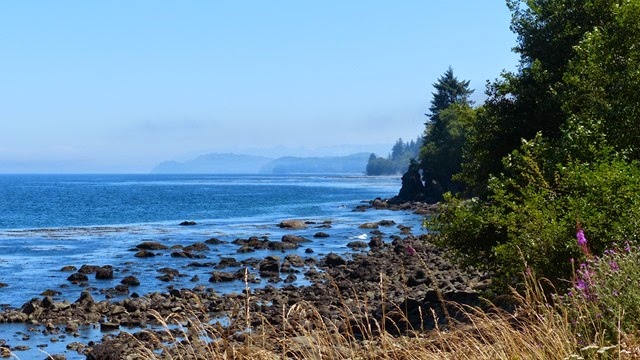 That is beautiful British Columbia on the other side of the strait. It was too foggy to see much so we knew it didn’t bode well for our visit to the cape. 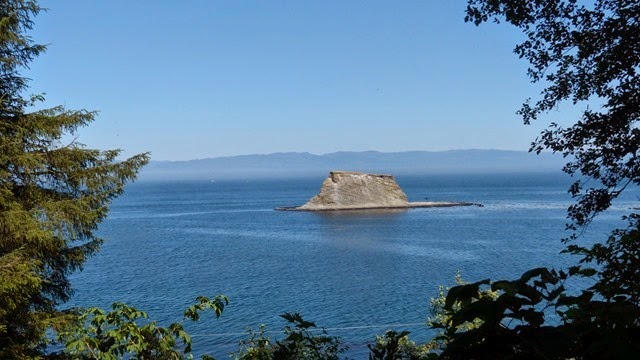 We then followed the signs to the Cape Flattery trail, a large parking lot full of people and cars. No fog there so we were hopeful.

It was a nice 3/4 mile hike to the northwesternmost (is that really a word?)point in the contiguous states. 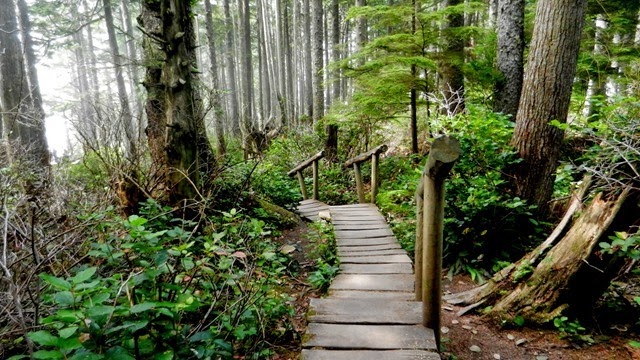 We made it! But so did the fog, swirling around us like cotton candy. 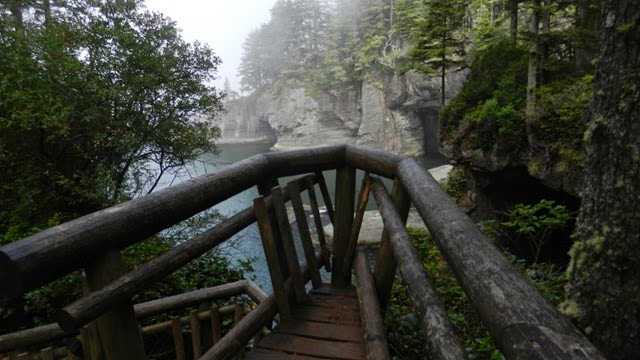 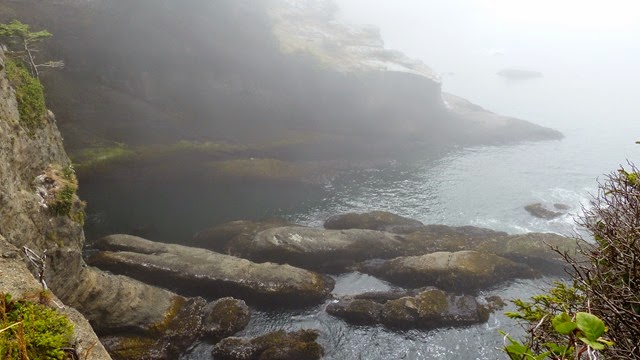 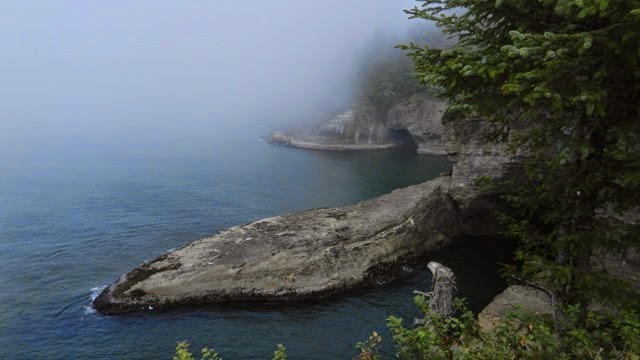 Jim took a few pictures but couldn’t tolerate the group of teenage boys that joined us so he went back. I stayed with hopes that the fog would move away even for a few minutes but it never did. I searched through the binoculars for puffins and whales but saw nothing but seagulls. In spite of the fog it was a beautiful spot and I am still glad we went. 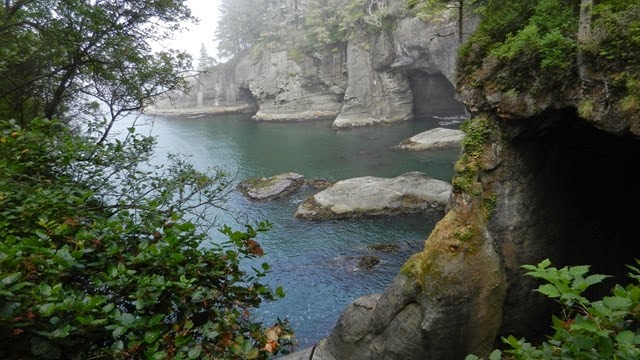 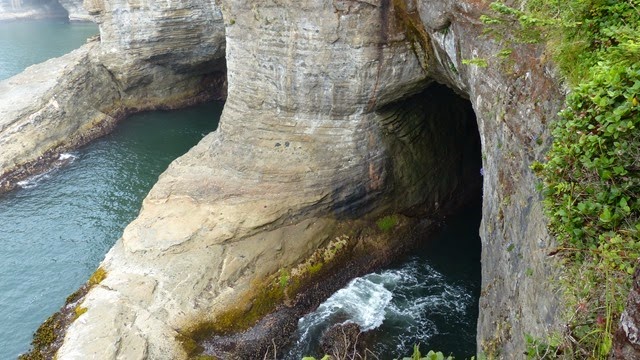 Check for future posts on Kimbopolo and Take to the Highway, as it was a sunny day when the rest of the gang visited the cape. I look forward to seeing their photos. They assured us there is an island with a lighthouse out there somewhere. And they even saw a puffin! Some days you get lucky.

I really would have liked to hike the three mile Shi Shi trail to what is supposed to be one of the most remote beaches in the country, but Jim is having a flare-up of Achilles tendonitis and with the fog we wouldn’t have been able to see much on the beach anyway, so we headed back home.  I took the opportunity to wash the car, then walked a couple blocks to the Clallam Bay Split Community Park on the Straight. There is a mile of beach that is accessed by a nice footbridge across the Clallam River. 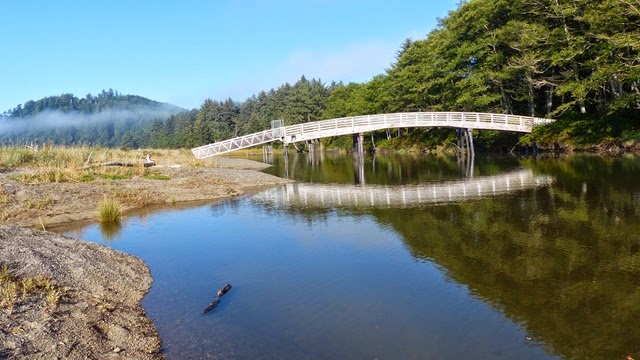 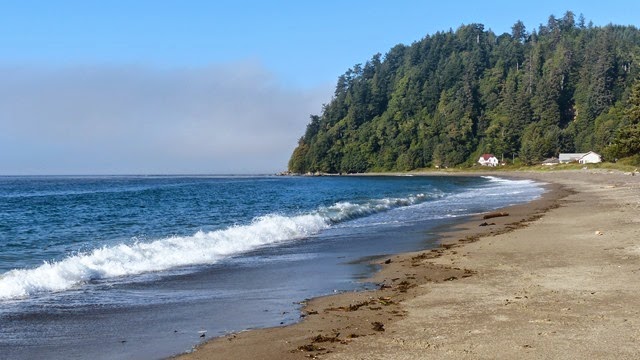 Today we rejoin the gang in the Olympic mountains.