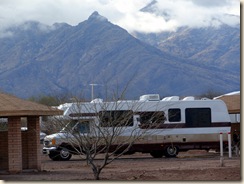 Left Picacho Peak on Saturday, knowing that it might be hard to get a campsite over the weekend. Our route was taking us by Casa Grande, so we stopped at the National Monument to see the prehistoric ruins. The visitor’s center was nice but the whole place was a bit underwhelming. 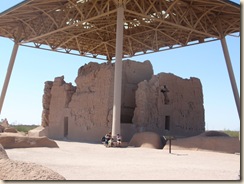 We then went to Globe, AZ. The drive was beautiful. 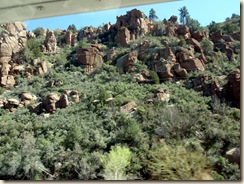 Not much there except an Indian casino, which had an RV park. Said they had laundry so we thought we’d spend a night and do some wash so we could get to Roper Lake State Park on Sunday after the weekenders left. What a dump! The laundry was closed, the RV “park “ was a giant parking lot and very full, there were 2 dogs running loose trying to attack other peoples’ dogs, and it was just a lovely place. Called the state park and they were full so we just decided to suck it up and stay. Did find a nice laundromat in Globe, so it wasn’t all bad. We were glad to get out of there. 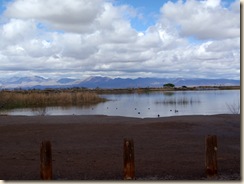 Had about a 75 mile drive to Safford, AZ and Roper Lake. What a nice place. Our friends Chuck and Carla decided to join us there on their way back to Iowa. They spent 5 days in the Chiricahuas after leaving Tucson and it sounds like a great place. We’ll put it on our list for another year. 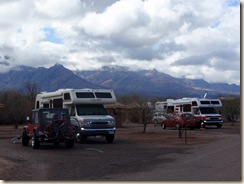 It actually rained the night before last, our first rain since we were in Big Bend the beginning of December. Should help the blooming wildflowers and cactus. There was a little snow on the peak of Mt Graham when we arrived but there is a lot more now since the rain. It is a beautiful sight. 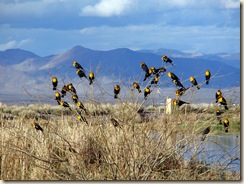 We ate dinner with our friends last night, and after dinner Debbie brought out a tub of black licorice from Trader Joe’s. As Jim was in the middle of chewing he suddenly said “You won’t believe what just happened”. I immediately said “ A crown came off”, and unfortunately I was right.. So today we will be looking for a dentist again. This is getting to be a much too common occurrence. Wish him luck. You can imagine how happy he is about it!