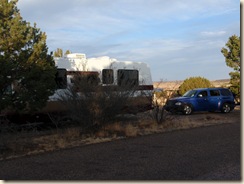 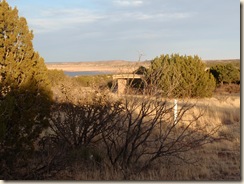 Arrived at Santa Rosa Lake State Park on Sunday. There are no mountains to be seen from here and we miss that, but it is a nice park.  Some of the sites have views of the lake . What is so unusual is there are trees here. Lots of juniper and pinon, which produce pine nuts.

Not long after we got here, another Lazy Daze came in. Turns out it was Darcy, from Florida, who is on an extended trip. She is on her way to Albuquerque to volunteer with Acupuncturists without Borders, which sounds like an interesting organization.

This is the beautiful sunrise we had this morning. I saw it from the bathroom window. Jim just saw this picture Debbie took when she let Elton out. 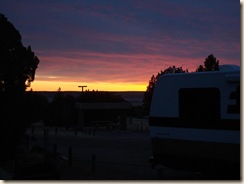 We  appreciated the shelter of the trees from the high winds yesterday. Sustained winds in the upper 30’s, gusting to 50. It was another exciting day indoors. Jim spent most of the day trying to remove a Trojan from the computer. I baked and rearranged the pantry. Another windstorm is predicted tomorrow.

We took a ride into the town of Santa Rosa today. It is known as the “Scuba Capital of the Great Southwest”, due to the famous Blue Hole near the center of town.  It is an artesian well and apparently people come from all around the area to learn to scuba dive here. 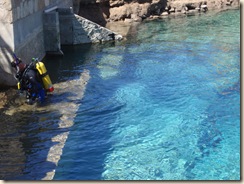 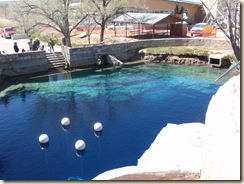 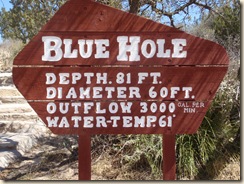 Santa Rosa is on the famous Route 66, but most of the old places have seen better days. I’m sure it was a thriving community in it’s time but it is pretty depressing looking now. 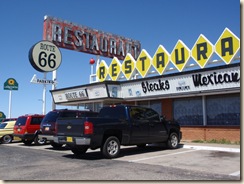