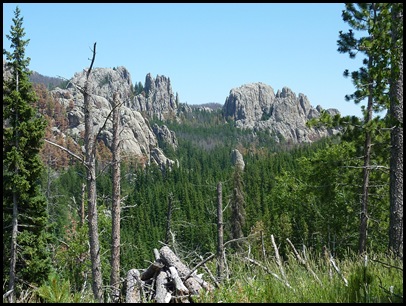 It was a cool day so we decided to make the climb to Harney Peak. At 7,242 feet it is the highest point east of the Rockies and west of the Pyrenees. The trailhead starts at the Sylvan Lake picnic area in Custer State Park, a beautiful spot, but crawling with people. We drove around the parking area several times before finding a spot, almost at Jim’s limit for waiting. 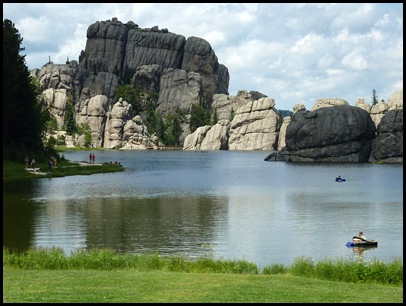 The trail is 3.5 miles one way to the peak, and since the starting elevation is 6,100, it is only 1,100 feet of climbing, which is not too bad. It was a nice steady climb through the woods with intermittent views of the mountains. 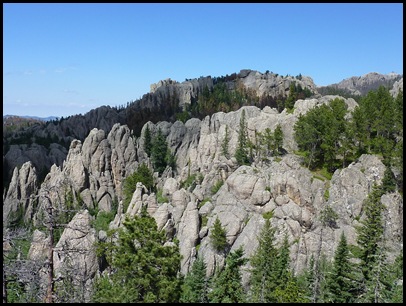 We were amazed at the number of people on the trail, especially families with young kids, and lots of overweight adults who didn’t look like they could walk one mile, let alone seven. Had to give them credit for trying, though, as we passed several who turned around long before the summit. The most uphill part came near the end, where the CCC built a fire tower in 1938, complete with stairs to reach it. 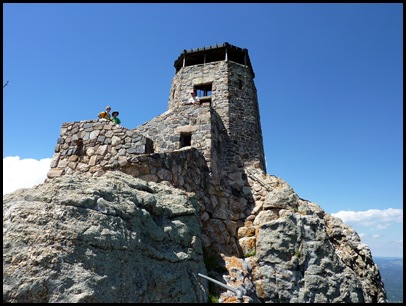 It was a great view from the tower. Too hazy for good photos, as it usually is. 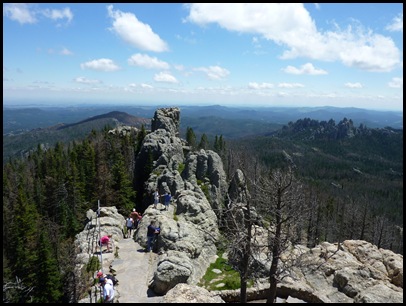 The backside of Mount Rushmore is in the far center. There are lots of dead pine trees from the mountain pine beetle infestation. Spoils the scenery and we’ve heard it is even worse in some parts of Colorado. 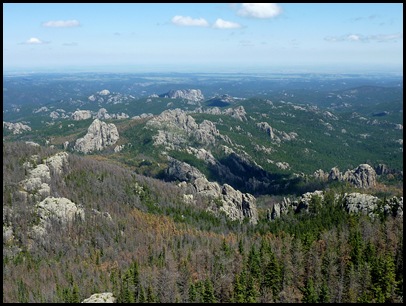 It was a pretty quick trip back down the trail, but we forgot there was going to be a long stretch of uphill on the way down. We were tired and ready to sit down at the end. Can’t imagine how some of those other people felt.

Last night we went to the Buglin’ Bull Sports Bar (smoke-free!) and watched the Tour de France, which we’ve been missing the past couple of weeks. At least Lance was in the breakaway but he just couldn’t win the stage. I’m guessing he wishes he would have stayed retired from bike racing.