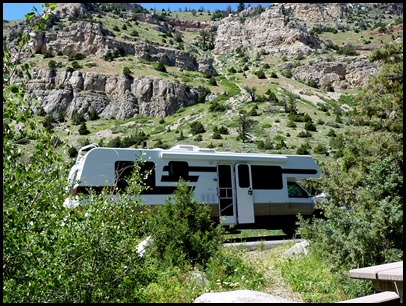 We are at Sinks Canyon State Park in the Popo Agie campground after a beautiful 165 mile drive Wednesday. We crossed the Continental Divide at Towigee Pass, over 9,600 ft elevation. We unhooked the car around 7000 ft which allowed Jim to make it up and down the pass in the rig a bit easier. l also enjoy driving the car on those kinds of winding mountain roads more than I do being a passenger.

We heard about Sinks Canyon from a nice couple parked next to us at Gros Ventre. They were also from Florida, had sold their house, and been on the road for 2 years. They said they had a beautiful campsite here, right on the Popo Agie River. Unfortunately, the one site on the river long enough for us was too unlevel. We tried our best but no matter which way we pulled in, nor how many Lynx levelers we used, it was impossible to even get close to being level. So we are at a nice site a little farther from the river but we can still hear the rushing water. Jim was pretty patient with me trying to get us level at the other site, but he really, really would like to get automatic levelers.

This park has no dump, no hookups, vault toilets, and a couple water spigots(but you can’t hook a hose to them), for $11/night. We learned our lesson a couple weeks ago when we left Flaming Gorge and thought we’d spend a night at an RV park on the way to the Tetons. Our water tank was almost empty, but we decided we didn’t need to add any since we’d be hooked up that night. Without calling ahead for a reservation we couldn’t get a site, and there was nothing else to choose from. We did pass several Forest Service campgrounds we could have stopped at but none of them had water. From now on we will be sure to have at least a quarter tank or more on travel days .We are slow learners.

More on Sinks Canyon. The Popo Agie River here flows into an underground limestone cavern at the Sinks, and emerges 1/4 mile down the canyon in a pool named the Rise. Really fascinating. This is the cavern opening. 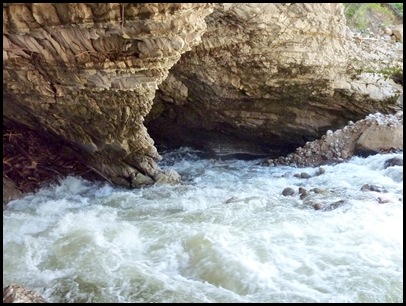 There is quite a bit of water flowing into it. 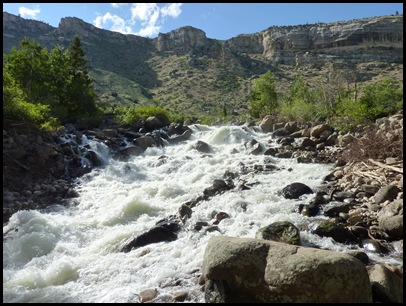 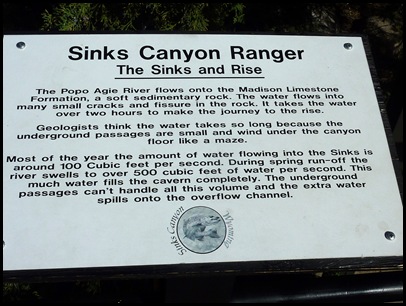 The Rise, which flows into a deep trout pool, and doesn’t look like nearly as much water coming out as what went in. 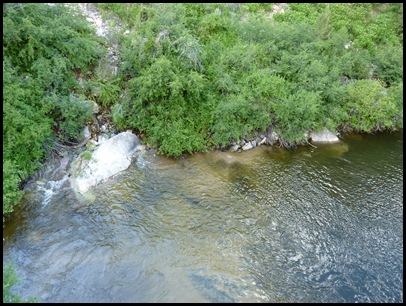 Yesterday we hiked a few miles along the Canyon trail, right behind the campground, which follows the river. 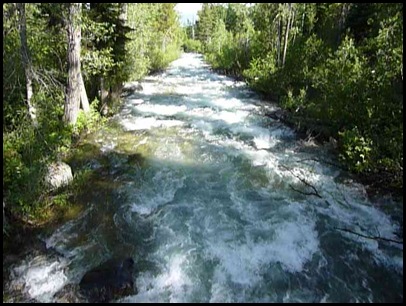 I had a request from a friend for a picture of Quincy, as Oreo tends to be the center of attention in our house. Since our only wildlife sighting was a dead baby deer on the trail, here is our very own “mountain lion”. Not a good picture but he wasn’t being too cooperative. 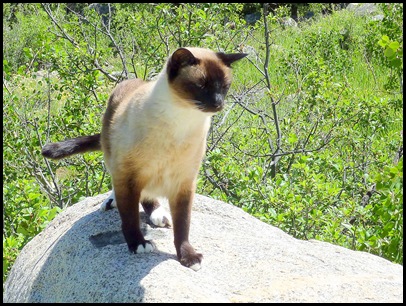 Today we’re heading up the road about 60 miles to Boysen State Park.