We spent last night in the Bighorn National Forest at the Sitting Bull Campground, elevation 8,600 ft. It is quite a drive along Rt.16, also called the Cloud Peak Skyway, between Ten Sleep and Buffalo, WY. Again we unhooked the car at around 5,000 feet as we were only 12 miles away and still had 3,600 feet of climbing to go.

Sitting Bull is a very nice campground, many of the sites have beautiful views of the meadow and mountains, but those were all taken so we got a site in the woods. It was $14/night with no hookups, but all the mosquitoes you could want! Also, we were looking to get cooler, and we sure did accomplish that. It was 68 and cloudy when we arrived, and started raining shortly after. The temperature dropped to 58, and never got much higher the rest of the afternoon. We did a short hike with lots of bug spray, which did keep the mosquitoes off. We had absolutely no cell signal or internet, and Jim said if the sun wasn’t out in the morning we were leaving. Woke up to more clouds, 42 degrees, and the threat of rain today, so off we went. Never even took a picture of the place.

Didn’t hook the car up for about 20 miles, as we still hadn’t reached the 9,666 ft Powder River pass. It was a very long, steep descent, but the views of Ten Sleep Canyon were lovely.

We ended up at Keyhole State Park, near Moorcroft, WY, in the Pronghorn campground. Got a great site right on a small bay, no bugs, and warmer but not too hot. There are no hookups and it is $17/night. 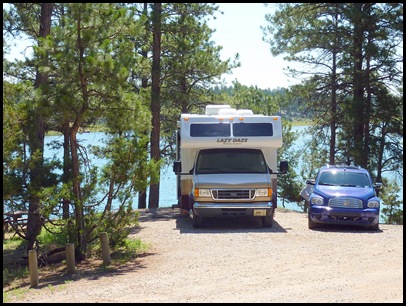 We are only 25 miles from Devils Tower National Monument, so we will take a drive there tomorrow.